I have a Qobuz account. There are often many dozens or even hundreds of Qobuz versions of Classical works.

In this scenario, in ordr to get Radio working with a streaming service again I then have to clear the queue and “end” radio.

Roon Radio doesn’t support composers, compositions, or performances for now, so this is expected.

If I select a PART of any multi-part WORK I get an orange on black warning. “nothing similar found, reverting to local library”. Radio then skips my seed altogether and starts on some random local track.

Does this happen for all works/parts? Are these identified albums?

If it’s not happening for everything, some examples would be helpful, we can take a look.

I have a brand new Qobuz account and it was happening with every identified album I tried. Local or Qobuz. A few days later and trying randomly I am having trouble reproducing it. But I get this behavior with this Castlnouvo-Tedesco album. Sorry, I am not quick enough to catch the orange on black error message as it just flashes by: 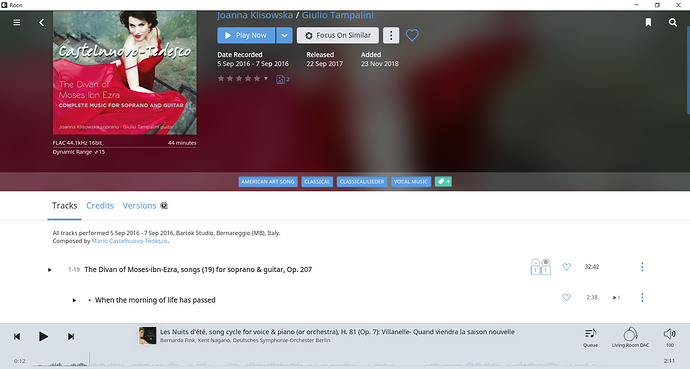 It might be that the numbers of users using that album in a listening session is statistically too low for the algorithm to work.
That is why it works well on the mainstream pop rock as loads of people listen. Obscure pop rock rnb are having issues too, numbers too low.

I’m not finding radio 1.6 really working for Classical at all on all sorts of levels. The seed is pretty much ignored and radio just turns into a shuffle of mostly large orchestral and concerto pieces from the famous composers.

That’s what i meant really. Although there are a large number of classical users on the forums they are a small number of users of roon and of those users who have some classical, like me, the tendency is to play the four Seasons not Lieder etc.

I actually find the same effect with more mainstream pop. If I seed with something from the 80s/90s of my youth roon 1.6 seems to do a very good job of staying there and maintaining a consistent era/mood. But it’s not reaching out into a more modern catologue. A bit like me really and everyone else listening to the music of their youth I guess. The only way to get a challenge I find is to seed with something more recent that I don’t know in the first place.

Yes the design is to range from the seed, but not too much.
I personally think there will be a lot more discovery going on now and that will extent the “known” edges - but not stuff out at the boundary.

Ah, the penny has dropped. So radio 1.6 is working off the listening habits of the pool of roon users? That’s going to be a very small pool I would have thought with many sub-genres, not just Classical. I think I had got it into my head that the ML was working off the listening habits of the universe of TIDAL and Quboz subscribers. But I see now that wouldn’t make any sense.

I guess this is why I am getting such mixed results. With some seeds 1.6 is just great. A real joy. But with others from memory I actually preferred 1.5.