I have opened up a new thread as this is about the Ashkenazy Chopin Walzes (and pretty much everything else). Not the Etudes. But for reference I link back as there seems to be a relationship:

The track titles 7-12 for Chopin Etudes Op. 10 and Op. 25 by Vladimir Ashkenazy are completely wrong (see below). Refer to https://www.allmusic.com/album/chopin-etudes-mw0001540185 for the correct information. [image]

There are no less than 10 editions of an album with the Etudes cover in the album identification wizard. The problem is if you look at the editions they are all completely different, all even with different album titles. I have the Walzes but in there are also:

These are all completely different albums although they were repackaged, re-bundled and re-boxed many times. Confusingly what this means in my particular case is that I get the Waltzes at a composition level correctly identified but the album is identified as the Etudes. So this: 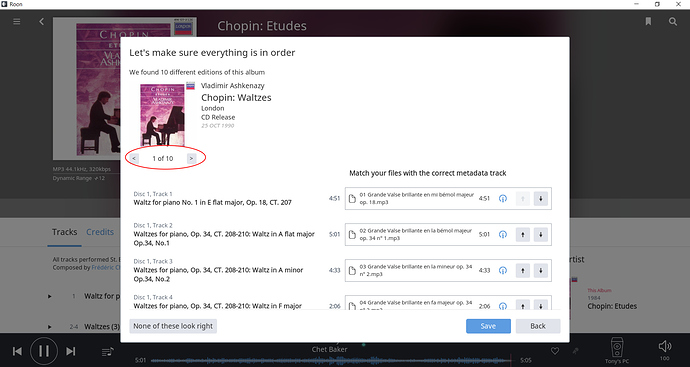 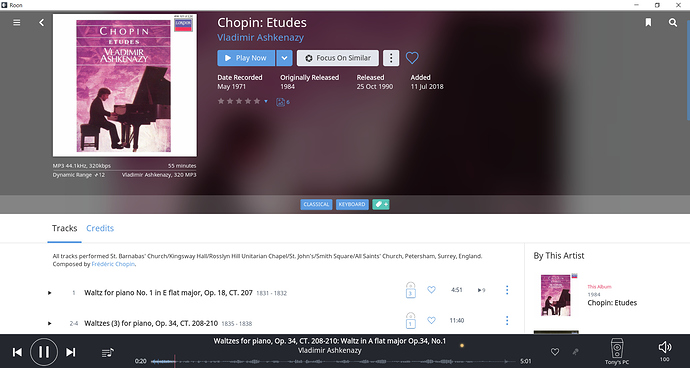 This is very confusing and has actually gone unnoticed in my library for quite a while. What I want is this: 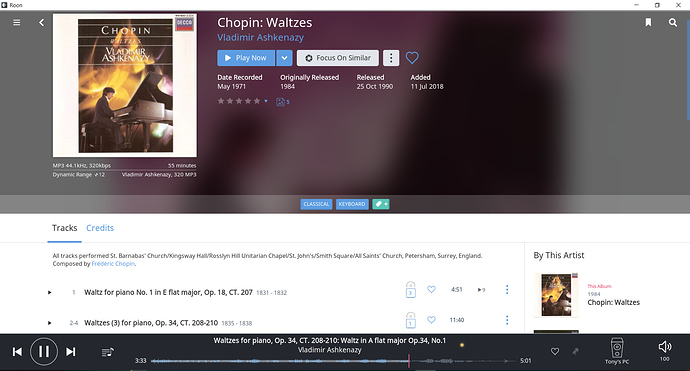 I am away from home and I am not able to check if my other Ashkenazy’s are similarly messed up. I also have the Nocturnes for example and it may be the case that hey are also identified as the etudes.

Thank you for the report, and apologies for the inconvenience.

Thanks for the prompt response @dylan. I am curious though. Are you able to elaborate what the incorrect equivalence is? That is, what exactly is being defined as equivalent to each other that shouldn’t be? Or will I just be more confused?

Tony, the problem in this case (and with some other bad album equivalences) is that the current equivalencing code does not take into account structurally incorrect contributions to Musicbrainz.

You can see the problem via the following link, which will also answer your question directly about what has been mixed up in this case (a lot, which makes an edit potentially very difficult):

That this does not always happen is down to the ignorance of contributors, to moderators (who do not understand the implications of allowing this laxness), to lack of enough experienced moderators, and to the submission “style guidelines” which are incomplete, ambiguous if not contradictory, and/or not adhered to or enforced.

Our new code removes Musicbrainz Release Group membership from its current pedestal as automatically trustworthy: unfortunately, whilst the Musicbrainz database structure is the best one I’ve seen, the data are not. Which in itself is also a lesson about the difficulties of crowd sourcing.

* As an aside, the 200-disc Complete Mozart Edition (Mozart 225) is an — ironically well entered — example of this badness: lovely metadata, but five groups of 40 different discs which are de facto purporting to be alternative releases of the same thing. It’s possible that we can do something to sort out such box sets on a case-by-case basis.

Wow Joel. I see what you are up against. Musicbrainz mods really need to enforce their own model. I thought the difference between a release group and a series on their style guide was clear enough.

It’s interesting to hear the background. I actually thought the splitting of the Mozart 225 into 5 sets was intentional. I’ve used that to create 5 smaller boxes I just roll-up with a “Mozart 225” tag. So silver linings . . .