I often highlight newly added albums and add them to my queue. Several times recently roon has then instead added thousands of tracks to the queue. Not a couple of albums. Just now I highlighted 2 albums and roon added or said it was adding 8,500 plus tracks. Maybe there is a practical limit and “only” 4,000 or so tracks were actually added. Annoying nevertheless. Anyone else noticing this?

Just tested it, but all seems expected behaviour here.

In order to help us to get aan idea of what is going on, can you please show a screenshot of your ‘faulty’ results, and (sorry if stupid question) detail how/what exactly you are doing?
Dirk

I have already cleared the queue and restarted roon. This has happened several times now, but directly after a re-boot I cannot reproduce it. The scenario is very simple. Here is a screenshot: 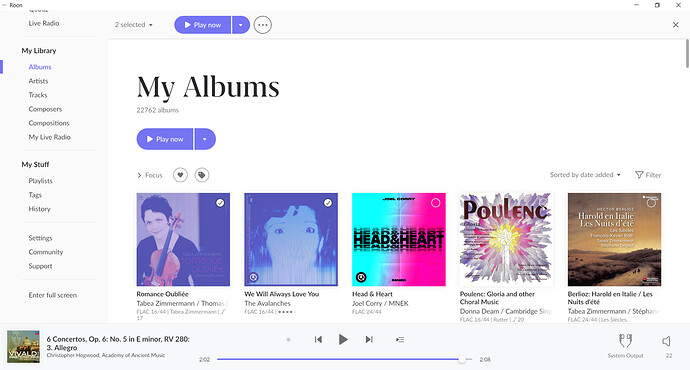 I am selecting a couple of albums but on occasion thousands of tracks are being added. I am not accidently highlighting all albums or anything like that. I’ll re-post next time it happens.

After album selection, do you select Play Now or do you select Add to Queue in the dropdown menu?
( just to see if I have to test anew)
Dirk

Actually it’s “add next”. This is particularly annoying as it is pretty much impossible to work out where the original cue must be starting so I just delete the entire queue. It is possible that it effects “add to queue” as well. I rarely use “play now” as that destroys the queue.

If you use Add Next, you break the queue open to insert the selected albums in the queue, normally at the track you are playing or where you left off.
I am a bit puzzled why you choose Add Next with a set of albums ( for me more logical with tracks, not with different albums)
Dirk

I don’t understand your question. I know what “add next” does. Roon gives me 3 choices. That is my preference. Why would I take your preference into account?

If by my best estimate roon has inserted 4,000 or so tracks before my original queue I cannot think of any obvious way of finding the insertion point. So, I just delete the entire queue as the best of a bad job.

If you can grab some additional screenshots next time you see this happen please share those here and we’ll take a look. Are these tracks that are added from other albums in your library? Does it seem to be pulling in the same tracks every time, or different?

As far as I can see, it is as if roon is highlighting all of my albums instead of just two. There is probably some physical limit so only a (large) sub-set and not all albums are inserted at the beginning of my queue. As far as I remember that was in date order just like my screen shot. In fact the first time this happened I thought that I had accidently highlighted my entire library. But that is not the case.

There are two “Play now” buttons: one for selection (top) and one for My Albums (bottom).
I guess you use the one on the bottom, instead of the one on the top.

I think you’re on to something here. If I go to My Albums, select a couple, then Add Next using the Play Now drop down at the top of the page, then it just adds the albums selected.

If I instead select Add Next using the Play Now drop down on the left below where it says My Albums, thousands of tracks are added just as the OP has reported. 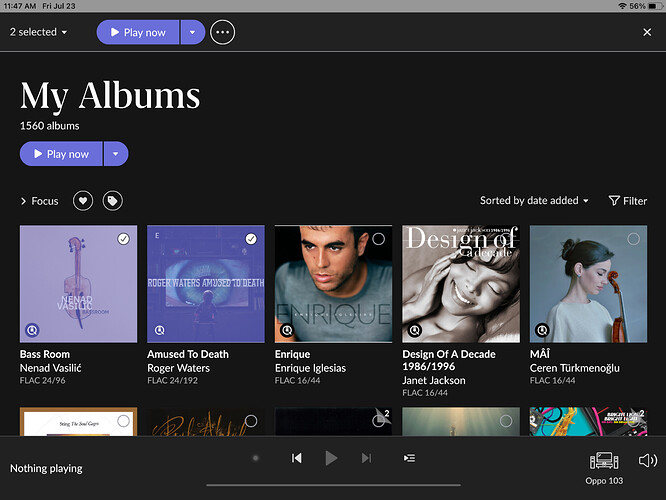 This is the normal behavior of the application, so you have no problem.

I have just enabled a dummy device to test and that is indeed the problem. I must say I have probably been using roon for 4 years or so and it never occurred to me once that roon worked in that way. I’d say I have been pressing either button fairly randomly for years but only just got annoyed enough to raise a ticket. Thanks for pointing it out.

@moderators This can be closed as there is a solution. Personally, I find a usability issue here as it certainly wasn’t intuitive to me that two identical buttons have entirely different functionality. What makes sense to me is that when the selection version of the button is in focus the play everything version of the button is greyed out or disabled.