I have an opera, Richard Strauss’ “Ariadne Auf Naxos” under James Levine. Due to how I ripped the 2 CDs, there were 2 subdirectories (basically, Acts 1 and 2). When I brought my whole collection of ripped and downloaded music (all .flac) under Roon (1.3, on Win10 Pro x64), I ended up with 2 entries (eg, when I searched for “ariadne,” 2 separate entries, along with a few other albums that had the string “ariadne”). For the life of me, I cannot get a single entry. I created a new subdirectory, copied all the files from the 2 subdirectories into the new subdirectory, deleted the 2 separate entries (after several warnings from Roon that the data would be permanently deleted from disk, which indeed happened, and the 2 entries disappeared), rescanned the watched directory/library … And the 2 entries are back! 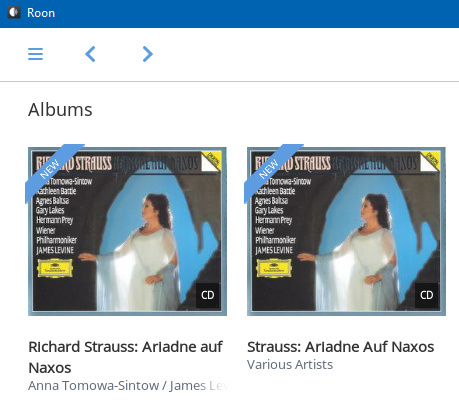 You will see that the first entry gives a name different from that of the second entry; and the artists identified differ. Internally to each entry, there are tracks of the respective CDs/subdirectories.

I realize that my hacking around has confused Roon. Right now I just want Roon to forget the entries and import/detect the contents of the new, merged subdirectory.

Select both albums, select edit and there is an option to merge them.

How exactly do I select 2 (or more) entries? When I click on one, Roon opens it up. (In File Explorer, by contrast, one can hold down the left-ctrl and click 1 or more entries, before actually applying an operation.)

Depends on what platform you are on. Long press on ipad. Right click on windows i think, not sure about mac. See this for more details.