We’re down to one house, one car, no drag car, no airplane, no boat, no pool, no beach condo,

Most people achieve that anyway not through minimalism.

I must admit I opened this thread thinking it was “Roon ate my music”. At least you will never have to make a cup of tea again due to the guilt

My clearout wasn’t so drastic but I have a number of, mostly hoarded and out of date, electronic devices with no power supply or specialised cable. As " you have to tidy that stuff up" when my daughter and partner lived with us for half a year, led to disposal whilst I was away.
It included her lightweight gardening power tools power units as well, so small consolation.

but, do you have a list of some /all of the lost CD’s. Mine are in boxes in the shed, if I have some that you have lost, happy days you can have them, maybe the memories can be reattached. (the nice bit).

I also picked up a job lot in a charity shop recently (the bit I couldn’t resist).

Only the nice bit is true.

Let me know if I can help.

In this month’s HiFi News 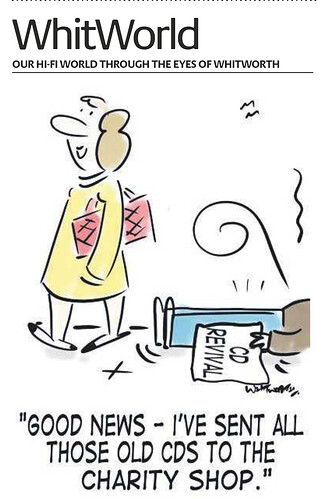 Was there any chance that you backed them up? I urge anyone to. I get some are attached to the cases and info that is provided with CD’s. But, I highly recommend keeping a digital.

Get to that charity shop and see if there’s any left.

Well, if you haven’t missed them even less used them in six years you would probably never have returned to them anyway. You are more in shock than in need.

Three or four Octobers ago I ripped all my CDs to FLAC, with 4 backup drives. Took a while.

And yet I am unable to force myself to get rid of the physical discs.

This was me last night

Is your wife’s back alright? I hope she had a hand truck. We’re moving house after twelve years and spent yesterday going through boxes of about 700 cd’s and pulling out a handful I want to keep (despite no longer having a cd player) and I have to say I can’t imagine dealing with 6000 cds! That’s a lot of heavy ‘toys!’

Sorry for the loss, but seeing as you haven’t even looked at them in years, keep on doing what you’ve been doing and their memory will eventually fade away…

I tossed my CD collection into the charity bin a few years back and switched to streaming. Never regretted it. Less for me is more.
Mind you I did not have any CD’s that were of any special value.

I currently subscribe to Tidal and Qobuz which both let you stream very high quality. They have over 55 million songs.

As far as actual CD’s, I see lots of thrift shop and even CD stores that sell them for as low as $ 1.00 US, Ebay also has may inexpensive lots of cd, and box sets.

I got Roon and Qobuz to avoid buying a cd player. Great to pick up cheap used CDs (sometimes mint can be had for $2-3) just to have lyrics booklet and liner notes, but ultimately Roon and streaming is so much simpler.

Qobuz has great deals for purchasing music. I am 61 years old and I like to dabble with Hi-Res and I have found Qobuz is the place to go. Hi-Res is cheaper than CD quality.

Nah, never made any backups of my CDs. I last calculated I’d need approx 4 to 4.5tb of hard drive space. Granted now a 6tb HDD can cost as little as £100. However, I’d probably select a SSD, bit costs even now are around the £450 mark.

Is your wife’s back alright?

We have a van and I think they were spread across 20 or so boxes.

Well, if you haven’t missed them even less used them in six years you would probably never have returned to them anyway. You are more in shock than in need

I think you’re right. Initial shock has subsided. I am now loading my Tidal library with as many albums I can remember I had. Discovering some forgotten gems.

Three or four Octobers ago I ripped all my CDs to FLAC, with 4 backup drives. Took a while.

And yet I am unable to force myself to get rid of the physical discs.

Well, if you haven’t missed them even less used them in six years you would probably never have returned to them anyway. You are more in shock than in need.

We’re having an extension to our house. Our garage needs to be removed as part of the project. It was in my plans to go through the boxes and sort out what I was going to keep. Ultimately my plan was to put them on my NAS for use with Roon.

but, do you have a list of some /all of the lost CD’s. Mine are in boxes in the shed, if I have some that you have lost, happy days you can have them, maybe the memories can be reattached. (the nice bit).

Sadly I never kept a list. Many thanks for the offer of giving me your CDs. I think inadvertently the wife did something that needed to be done, which I couldn’t. Just need to find someone to gift my Cyrus CD player to as now not needed. Haven’t actually purchased a CD in a very long time.

This thread is an example of why things are meaningless. It could have just as easily been theft, a fire, flood, or whatever. All you have is those who you love and love you.

You/we could be living in Ukraine right now.

I completely agree. But surely we, users of Roon and good quality music services also have good quality hi-fi systems.

I am very lucky to live here in the UK and pray regular for all those in Ukraine.

I really feel for you man! I broke up with someone and moved out about 15 years ago and took all my cassettes and threw them out.

They represented my teenage music before I had a CD player. Every time I remember an album I regret not having them any more. Especially now I have a decent separates system.

I store my CD in banana boxes.
No way my wife could even lift one let alone carry them to our vehicle.

Banana boxes are open topped I believe. I used some removal type boxes. Although my wife isn’t a weightlifter, she’s pretty strong and can easily lift 20 to 25kg boxes. One of my many questions to her “didn’t you think about opening one of those boxes, they were quite heavy”. Her reply now, after me moaning for the last few days is that she was sick of seeing the boxes all the time and me not doing anything about it.

Maybe she did mean to do it after all. Cow!

I’m going to be clean minded and think that is work.

I think you’re right. Initial shock has subsided. I am now loading my Tidal library with as many albums I can remember I had. Discovering some forgotten gems.

When we last moved, we finally were able to get the CDs out of storage, and get round to re-ripping them. The last time we did it was way back in the Slimp3 days when storage was expensive, so the hard drives were not anywhere near as cheap - or capacious - as today. Yes, they’d had a sort-of upgrade to the Apple Match versions at some point, but…

Anyway, what I discovered doing that was just how many of our CDs weren’t recognised and auto-labelled by CD ripping software! Turns out I have eclectic tastes and fondness for one-hit-wonders and weird problematic second albums. I’ve also found it kind of interesting how much of the stuff I have from the 80s and 90s isn’t actually available on streaming here. A case in point - I couldn’t find my 80s Grace Jones CDs, and they weren’t available on Apple Music, Tidal, Qobuz or Spotify! So I had to track down “new” second hand copies. Recently they have appeared on Qobuz, and it looks like it’s all been a rights issue over the actual cover art as the reissues don’t have that artwork anymore.