Does Ropieee (and RPi) have limitations on the number of audio channels it can handle?

I have one RPi sans HAT and one DigiOne. Both have Bridge endpoint software. But neither is recognized by Roon as a multichannel output. Everything gets downmixed.

I’m told I need a NUC with HDMI, and I well may. But I’d prefer working with existing RPi kit if it can be coaxed into a multi-channel mode.

I don’t think that Ropieee even supports the HDMI interface at all at the moment (@spockfish will be able to give the definitive answer). But even if it does, it’s likely that it will be for 2-channel audio only. AFAIK, none of the Linux distros support multichannel audio at the moment. I think we are still in the same situation as two years ago:

About to give up on multichannel Raspberry Pi

After more than a week of tinkering with the RPi 3 and an Odroid C2, I am about to give up on multichannel via HDMI: Raspberry Pi Apparently, the standard RPi kernel does not support more than 2 channels of PCM output via HDMI. I’ve tried running DietPi with a custom kernel, containing a patched version of bcm2835-pcm.c that raises the number of supported channels to 8, but that didn’t have the expected effect. So I decided to have a look at another SBC that I had flying around… Odroid C2 Runn…

No, in essence not.

But it’s more complicated then that. Roon reflects what the audio endpoint is capable of. So take the Digione for example, that’s a 2 channel device.

Next time you’re in the Achterhoek, drop by - I’ll be happy to demonstrate Roon driving my Denon AVR with 5.1 audio…

This is really funny… I am in de achterhoek.

My take: Roon has no problem with multichannel music, but computer implementations of HDMI can best be described as funky. I was able to get multichannel working from my Microsoft Surface via HDMI to my Marantz AV8802A with a few work arounds, but I’ve enjoyed multichannel much more since I got an exaSound e38 DAC connected via USB.

I am interested to know what device are you using as Roon end point?

I am using Macbook pro connected via HDMI to the Denon X8500. It is playing 5.1 ch just fine. My problem so far is that it does not send direct DSD, it converts it to PCM.

I have multichannel working via HDMI from my Roon Rock to my Denon X3400. HDMI is limited to something like 196KHz, so native DSD or even DSD via DoP isn’t possible. Roon downsamples it to 96KHz and sends it out HDMI. It basically works, but not perfectly. I often have issues with the HDMI handshake insisting it’s 2 channel and I have to fuss around to get it to enable 5.1. 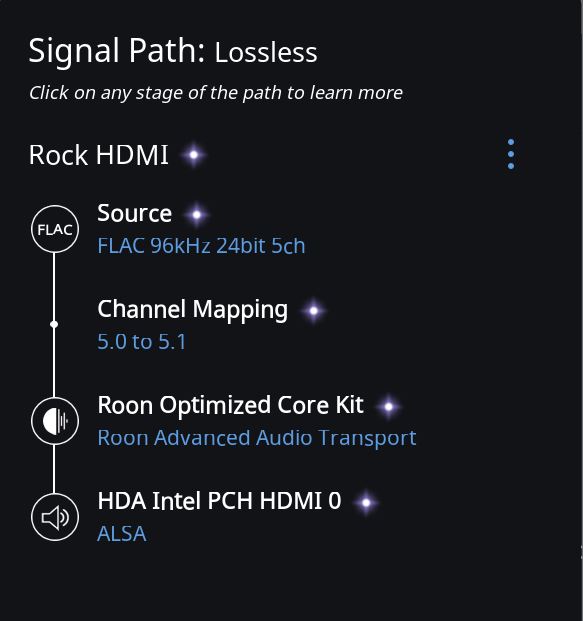 I only use HDMI for the multichannel files, for stereo I use an external DAC.

This is really a Roon question, not RoPieee. Roon Bridge is what interrogates the hardware and reports the capabilities back to the Roon Core.

Roon certainly supports multichannel over USB when the core is connected directly to the DAC, and I believe when Roon Bridge is used on a Mac or Windows PC.

@john commented in a 2018 post that Linux based endpoints had trouble passing multichannel via USB – Multichannel USB DAC on Linux endpoint - "Transport: failed to initialize the audio device" error. There hasn’t been much recent discussion of multichannel USB that I can find.

Does anyone know whether multichannel USB works when the endpoint is running Ropieee?

For example I would like to use this multiway Dac.

I am looking to implement an active crossover using Roon software EQ, and would like to know if I need a windows endpoint (Obviously interface depending) to make this work.

For example I would like to use this multiway Dac.
Okto Research

Unless someone will send Harry an Okto DAC to test and confirm.

Sending me gadgets is always a good idea

Have you tried using Coreelec on the RPI? I had the same issue with my Odroid N2+, when I came across this tutorial:

Turning An Android Box (CorElec) Into A Roon Endpoint

With the recent influx of android boxes flooding the market in the last year or so, I found it quite fitting to write a guide on how to…

(this works with any arm board)

Coreelec uses a patched kernel enabling multichannel audio on the N2+, and so far they are the only one afaik who implemented it. It maybe the same for the RPI. Worth a try. Since having installed Coreelec and Roonbridge on my board I can enjoy multichannel audio via HDMI on my N2+ board.

I found this thread, so it looks possible:

That would be best because my proposal requires a Pi and many people like to drive the soundcard directly from Windows.

That’s my thread. All I see there is a Motu works, using a convoluted (hehe) method.

If I were you I wouldn’t buy till you get confirmation an Okto works. And worls with no pops…

Same advice, ask Okto to test or send Harry a toy to play with and he can confirm.

Perhaps for your information:
The okto dac 8 pro (I’ve ordered it some months ago and now I’m waiting…) is shown as ‘DIYINHK DSD DXD 384kHz USB to I2S/DSD’ with USB ID 0x20b1, 0x2009.
The SOtM devices should be able to work with the dac also in using native DSD in multichannel. I don’t know if RoPieee will do work in the same way…

Thanks, I’m not sure what this tells me?

Worst case I grab a silent nuc.
Something like this: