502DAC Not Recognized in Roon

Huge success using RoPieee with touchscreen and without. I’ve set up a few USB DACs, a Singxer SU-1 D2D, and an ApplePi DAC. Kudos! I am a noob, and the installs and web configurations went off without a hitch. Donation sent.

I am trying to get a 502DAC HAT up and running. I assumed (possibly incorrectly) that using the HiFiBerry Digi+ Pro configuration in RoPieee would bring luck. The mfgr mentions using those drivers with other types of installs (other software products).

So, in short - is this HAT supported? Any other users with success?

@spockfish I did sent feedback through the web interface 7999d8c02e7fde62 Any help is greatly appreciated. Your work is a great solution for my needs. A slightly separate question. Can multiple instances of RoPieee be running at the same time? I’d ultimately like to have 3 sets running as endpoints simultaneously once it’s all said and done

They can but you have to create separate images for each.

In the log your device is not being recognized. Can you try by selecting ‘Raspberry Pi HAT’ (this is the last entry)?

In general it’s simple: I would love to support this HAT, so we need to figure out how exactly. Their website is not very clear on this…

Let me know how it works out with the Raspberry Pi HAT.

Wow, you guys are quick! Much thanks to @spockfish and @Henry_McLeod!

Got it running perfectly. I used the HiFiBerry DAC+/DAC+ Pro/AMP setting in RoPieee. I also (after reading your replies) tried the Rasberry Pi DAC (I2S) which also works perfectly.

Using the AES output now directly to my DAC. All is right with the world.

I’ll add it to the menu, so you then select it directly and it’s clear for other users as well.

Harry (@spockfish), the wifi works great! (For those new to RoPieee, use ethernet for the initial install and then use the web gui to add wifi support under the Network tab. Don’t forget to make a DHCP reservation for the new MAC address if desired.) Also, just FYI, the Pi2Design 502DAC Pro that I have been using recently (AES out) does work selecting the HiFiBerry Digi+ Pro dropdown, in case anyone asks.

And, confirming the options over links over SSH:

How could I’ve missed that?

I’ll implement it straight away so it’s done for the next release.

Just tried the Digi+ Pro selection again for reconfirmation and no joy with the 502DAC.

@Nathan_Wilkes, I noticed you have the 502DAC Pro. I am not sure if that is the difference. Your post and below quote from Mike Kelly made me try the Digi+ Pro first, and it was not recognized.

Hope that helps others with similar situations.

Once again, thanks to all.

Would it help if I send logs with the 3 configurations (RPI I2S, Digi+ Pro, and DAC+ Pro)?

re: 502DAC Pro - I can’t comment on earlier/other design iterations. The manufacturer would need to clarify any differences. That’s out of my depth.

If I understand their website correctly the 502DAC P.4, the one you have, surpasses all previous models and incorporates both digital and analog outputs.

So @Nathan_Wilkes has a version you can’t buy anymore.

Makes perfect sense. I am up and running perfectly using the DAC+ or RPi I2S.

Since a previous poster (Mike, I am assuming is the manufacturer) mentioned that they were changing images between some designs, perhaps what @Nathan_Wilkes has (the Pro) works well with Digi + and the P.4 uses a different image.

That is a bit out of my depth, but I simply did not want other noobs like me to get stuck if you put a menu item that mentions the 502DAC within RoPieee and used the same settings for all. It might not work if the mfg changed things between models and iterations of the same model. @Nathan_Wilkes and I have similar, but different products.

EDITED TO ADD - When I say “perfectly” - the only output I have tried is AES. I have not tried coax/BNC or the analog output.

I think that for starters it should be identified by ‘502DAC P.4’

We can then add a separate entry for the ‘old’ models. We only need to confirm that my assumption on model naming is correct

For information on the (old, no longer available) model I have, see https://www.indiegogo.com/projects/digital-analog-audio-shields-for-the-raspberry-pi#/. I don’t need a dropdown menu (obviously), so I would support @spockfish 's suggestion of 502DAC P.4, as per http://www.pi2design.com/502dac.html: 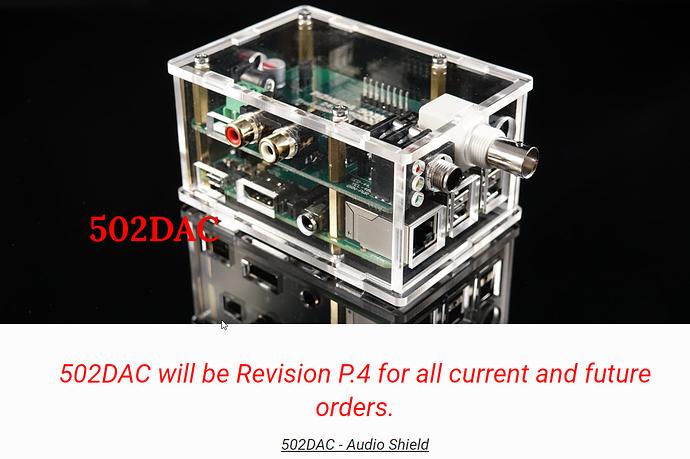 Any chance that you can test all outputs with the ‘RPI DAC’ selected so we can make sure that works?

Both digital work with RPi (I2S) - no joy on analog.

Shameful admission of me not RTFM… here is a link to the manual and the relevant quote from the manual.

Hope this helps with development of RoPieee and maybe saves some other people some time. I feel foolish… Took me a while to find the manual online. It’s under the “Test Results” header on the web page and the naming convention of the file is a bit odd. (no disrespect meant to the mfgr. Brilliant product).

“The 502DAC uses the standard PCM5122 driver and most Raspberry Pi player
software (Moode, PI Musicbox, Volumio, Rune, etc) can be configured to the Hifiberry DAC+ setting. No further software is required”

ok. Then I’ll switch to the Hifiberry DAC+ setting. no problem.