6k Files Not Associated With a Storage Location Overnight, No Change To Storage?

Testing errors with RaspPi 4, ethernet connected, running Raspbian and latest version of RoonBridge, connected to a SchiitStack via USB.

Sometime over the past month, my Settings → Library → Library Maintenance started reporting “Clean up 6074 files that are not Associated with a storage location”. This is very troubling because I’ve had no changes at all to the underlying storage, no mass deletes, nothing. This literally went from the normal 0 to 6074 between the last time I cleaned up the library to clean up deleted tracks and today, a task I do every few weeks or at least every month.

I have confirmed with offline backups that no unexpected files have been deleted, and I 100% know that nothing has changed on the NAS: Roon is watching 3 folders and they’re the same three folders it’s been watching since day 1, on the same underlying storage volumes on the NAS. There has been no change to the media library nor anything with the actual storage.

Also telling: My Roon stats on the home page of the app used to say ~62k tracks, now it says ~57k tracks, which matches pretty closely to the number of tracks reported to not be associated with any storage location in Library maintenance. So Roon thinks it’s lost 10% of my tracks.

Is there any way to troubleshoot this? Again, I’m 100% confident nothing has changed on the NAS with storage locations or the files themselves (nor NAS version or basically anything on the NAS), so this has to be a Roon DB issue. Is there any way to query the DB to see what files it thinks are no longer available (and more importantly what storage location it thinks is now gone)?

Worst case: Is there a way to query the DB to see when this issue changed so I can at least test restoring a backup from before it decided that 6k tracks were abandoned and hoping for the best?

How many tracks do you have on the NAS? When Roon reports files for clean up, this really means there are references to missing files or those that have significantly changed, i.e., bulk editing or name changes. Nothing is deleted on the NAS since Roon does not touch your media.

Backups now include integrity checks, so you can back up the current database with confidence and restore it later if needed. However, if you do restore to an earlier version, Roon will still report fewer tracks soon afterwards if they are indeed unavailable for some reason.

All of the tracks are on the NAS (Core is also running on the same NAS), no tracks exist outside of two mounted volumes on the NAS, the same ones I’ve been using since my initial import two years.

I’m not worried about losing the source content, I’m more worried about why Roon suddenly thinks there are tracks no longer associated with a storage location and has removed them from the DB. I’d really like to know which tracks it things are no longer available.

For backups I auto-backup every 4 days, so I’d also like to be able to ID when this issue popped up so I can restore from the last good backup before Roon thought it lost 6k files (although it wouldn’t really help that much without knowing which files and/or locations Roon thought were removed, so I’m back to the original question).

…has removed them from the DB…

Roon hasn’t removed them; clean-up does that. But I think you’re missing the point. If you’re confident that Roon can’t find 6,000 files, perhaps you can identify them and then maybe cast some light on why Roon can’t see them.

The only thing I’m confident of is that Roon has made a mistake.

Or perhaps the latest version is cleaning up longer-running issues with files that really have been removed weren’t properly ID’d in the DB. There should be no files in my watched storage locations that Roon can’t find.

My root request is a way to query the DB to find out 1) what those 6k files are, and 2) why Roon thinks each is no long associated with a storage location.

There should be no files in my watched storage locations that Roon can’t find.

Surely, if you can’t see any gaps in your library, then it’s not a problem? You can’t query the database in the familiar sense, since LevelDB is not an SQL database.

Is there any way to troubleshoot this?

If you had an excel export of library contents, prior and post you could compare them. I do this to compare streaming content as a way of capturing what was deprecated from streaming services.

At this point, you can still create an excel output of what is currently in Roon, and then, compare the excel to the NAS files.

is a way to query the DB

There is not a way to externally query the Roon database like a SQL DB.

There should be no files in my watched storage locations that Roon can’t find.

Unless they have some of the following reasons.

Thanks @rugby, this is great!

At this point, you can still create an excel output of what is currently in Roon, and then, compare the excel to the NAS files.

Where can I export a complete list of songs from the DB? That’s an easy solution, I can definitely compare that output with what’s on the file store and track down the missing tracks in the DB.

There is not a way to externally query the Roon database like a SQL DB.

Thanks. I was more using query to mean get the data out of the DB somehow rather than directly suggesting a select table... function. Per the above, if there’s a way to get a dump of everything in the DB then it becomes grep’able and easy as. Still doesn’t help solve the why question, which leads me to…

Unless they have some of the following reasons.

Because we’re talking about 10% of my library, and because it happened sometime around the last two hotfix releases, it really makes me think that something changed on their end where think 6k files are no longer valid (for the reasons outlined in the FAQ). I’d be happy to file that as a bug, if/when I can ID those 6k tracks and try to determine why they were removed, and assuming that this really is a bug and not a bug fix for an issue that’s been around for at least two years since my original import.

You can do this for Albums and Tracks, but the process is the same. If you have streaming, use Focus to remove them from your view, then select all ctrl+A and then choose how you want to export. 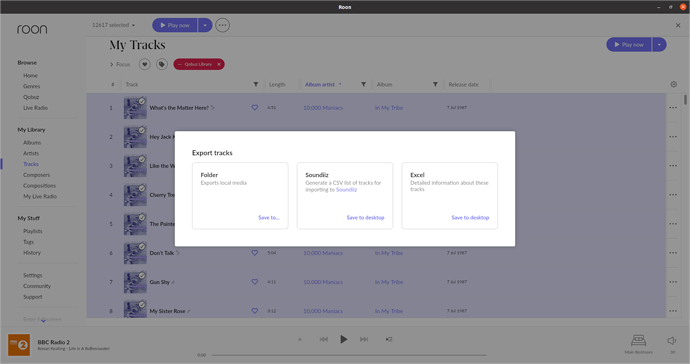 If looks like your problems could be emanating from your choice of Core machine. The Synology DS218+ is a dual Core Celeron J3355 with 2GB of RAM. That’s well below our system recommendations for Roon Core/Server. You can find more details on recommended NAS platforms in this article from our Help Center:

To get a faster, more reliable Roon experience, we recommend moving away from networked file systems in favor of local storage. For a fully turnkey Roon Core with space for internal storage, check out Nucleus by Roon Labs. Roon Server requires a more...

Try moving your Core off of that machine to one of your in spec remotes and see if that helps. In Roon go to Settings > General and choose Disconnect on the NAS. Then This Mac/or PC as the Core.

Please let us know if this helps.

Thanks @jamie. I would love to move the core off of the NAS, and I’ve been trying for many, many months to move the core over to a MacBookPro, but Roon core just isn’t stable on that platform (at least not with my library). I still have an open support ticket/conversation here:

But I’m curious if there’s something in running on an under-powered core that would directly contribute to Roon thinking that 6k tracks are no longer associated with a storage location. That may very will be related and would love to dig into that connection to understand the root cause.

Thank you for providing these additional details. You Mac has considerably more processing power than the Celeron based Synology. Can you tell us a bit more about the instability that you’ve described? What kind of behavior are you seeing from Roon on that machine? I’ll be watching for your reply.

Thanks @jamie. The root issue is that my library removes tracks from playlists when running Core on the MBP. The full thread can be found here: Migrated Core, NAS Storage, Playlists Now (Mostly) Empty - #38 by noris

The title is a bit misleading because I didn’t actually migrate the NAS storage; the MBP is using the same NAS storage as the NAS Core is using (details in the thread). Thanks!

Just to close this one, I did a few tests over the weekend:

tl;dr - Still no idea why Roon all of sudden flagged 6k tracks as unavailable. The first test of comparing the library with NAS files should have ID’d anything Roon thought was missing but still on the NAS, and since the storage devices/drives/names haven’t changed I know nothing has been removed. Very odd, but chalking it up to (hopefully) Roon just catching up with something that happened a few years ago.

Thank you for this update. I’m happy to hear that your CSV reconciliation didn’t reveal any missing music!