A little experiment with power conditioning

I have my main rig set up in a piece of furniture that makes running cables a bit awkward, so earlier this week I decided to put an end to the rat’s nest of extension cables and get one large surge protector/power strip to plug everything into directly. After some back and forth, I settled on a Furman PST-6, which is apparently well-regarded as both a surge protector and to clean up some of the supposed noise on the power lines (40dB reduction 150kHz-100Mhz).

Now I want to be clear that I don’t really believe in all that power conditioning stuff. There is a bit of a buzz when I hold my ear right next to the tweeter of my floor standers, so I figured maybe that would go away. I had also read a review of the PST-8D (which is the slightly bigger version of the same power strip) that basically said that “it does no harm” but no more than that. It does make sense to have a surge protector for both a possible power spike and the antenna cable that’s running from the roof to my tuner.

So it was interesting that immediately after plugging everything into the new power strip and turning it back on, the sound was markedly improved! It sounded fuller and more satisfying. Nothing I could put my finger on specifically, but it was quite noticeable.

Do I believe that there is an actual difference? No. The buzz on the tweeter is also still there. But it was interesting to experience that, and I can totally see why people insist that they hear a real improvement with expensive cables, power conditioners, directional fuses, etc. Confirmation bias is incredibly strong and not something you can avoid even when you’re aware of it.

The thing about Furman is that the surge protection circuit is not destroyed in the protection from a surge.
I have a couple of these for my amps and DAC. - 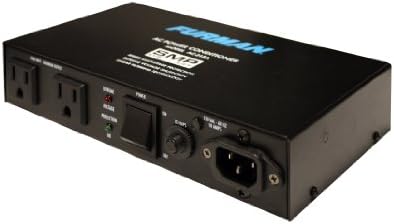 The AC-215A is specifically designed for today's diverse power purification applications. This compact unit can be mounted behind a projector; LCD or plasma screen; inside of a rack; on a wall or a ce ...

I use IsoTek power conditioners, and they have a clear effect on the sound of my system.