Most of the music I own is thoroughly tagged, including WORK and PART tags. I’ve noticed this can usually get in the way of Roon matching a composition to its metadata sources, even when the name used in the WORK tag matches the name used by most metadata sources I know of. For example, I have all performances of Beethoven’s first symphony tagged as “Symphony No. 1 in C major, Op. 21”. All performances are grouped correctly, but no metadata is available. If I remove the WORK tag, then the composition is identified correctly and metadata is added.

Furthermore, there are compositions where the only performance I own is in an album that cannot be identified. In those cases I’ve resorted to finding an album with the same composition in Tidal, adding it to my library, and then merging the compositions. While this sort of works, it’s very awkward and ends up polluting my library with albums I don’t really want there.

How to correct a wrong composition association Roon Software

so, this is my my question. sorry i have not searched extensively in the forum, i hope this is not a duplicate. anyway, i’ve got this composition: [image] the association is wrong. in fact sunny skylar is the author of the english translation (i guess), so it should appear only in the beatles album. the other tracks should be associated to another compostition, by consuelo velasquez (the original composer) [image] actually i have it (even though also this one is not well identified, as ther…

I’ve hit that a couple of times, but selecting the tracks, then edit, then re-scan usually fixes it. If not, then I usually go into the metadata details, swap back to using Roon info for the grouping, then back to file info.

I feel you on the support group

Yeah, I first tag the files using a third party editor (usually use Foobar or dbpoweramp) to set WORK and PART tags. Most of the time, Roon picks everything up correctly. Every once in a while, it will not pick up a change I’ve made. At that point, inside the Roon UI, I select the tracks, then hit the Edit button and scroll down to Re-scan Tracks in the Track Options tab. That usually causes Roon to pick up the changes I made.

A wizard to tell Roon “these tracks are these canonical work” would be a good idea.

+1
I call this feature “work chooser”

I agree this feature is desperately needed to help Roon work effectively with classical music.
Tied in with this, it would be wonderful if Roon could add descriptions for the works themselves rather than just a review of each performance.

it would be wonderful if Roon could add descriptions for the works themselves rather than just a review of each performance.

This is already the case for works which have been considered important enough. Or do you mean something else? 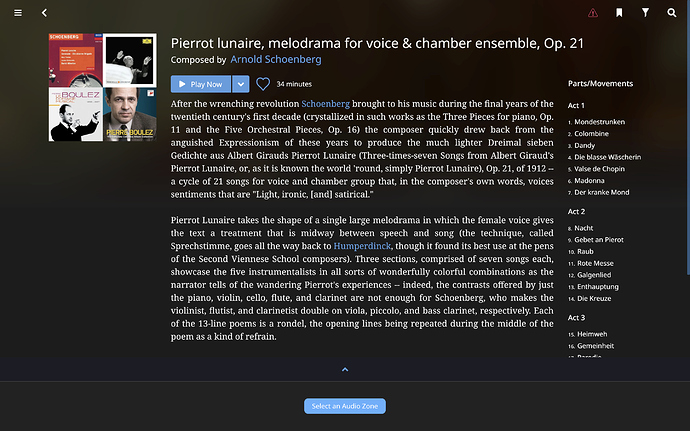 I hadn’t realised these were here! Yes, this is great, although the original feature request still stands. I’ve had to pretend an unidentified album is a completely different performance so Roon at least know which work it is. There should be a better way.
Regarding the works information, is there a way to get to this when playing an album without having to select it again via compositions?

In the now playing screen, select the composition info (If it exists) 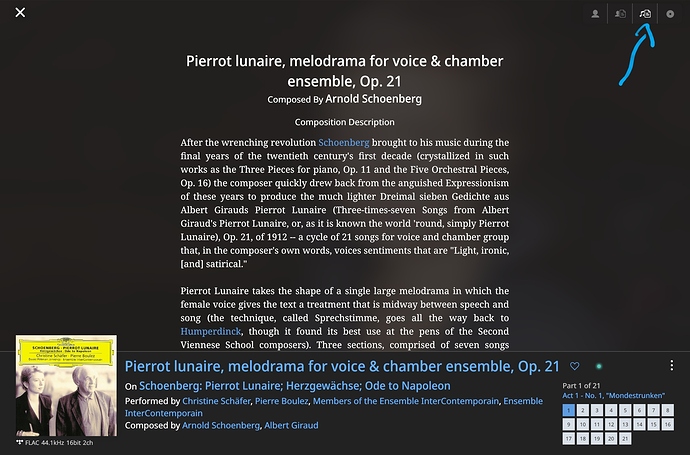