About the Discography section

After Roon 1.8 appeared many users (including me) were confused about the Discography section on the artist page (@support). In a recent post, @danny shed some light on how Roon actually intends it to be:

Some local albums still not showing after 790 update Support

It should be noted that the discography feature never showed you library albums explicitly. It always showed our version of the world, and if you lack music from outside your library (meaning no streaming), we actually just hide that tab completely. The “albums in your library” section at the top of the first tab in the artist details is meant to be the ‘your stuff view’. We are having discussions on how to improve this to include “duplicates” and “versions”, but that is outside the scope of a…

Since this feature is apparently under discussion by the Roon team at the moment, I’d like to contribute some comments. It is clear that the present state of the Discography section is unsatisfactory. But before changing any details it makes sense to reflect about what the purpose of this section acually should be.

Finally I can’t resist to give some examples why the discography is not useful for me in its present state (although I know that it is unfair because it’s still in its infancy, and I’d like to stress again that in principle I find it very useful)

Leonard Bernstein seems have been an exclusive artist for the French BnF label. He later even made a recording for the Austrian newspaper Kronenzeitung and a "Fiesta 2014) soccer album: 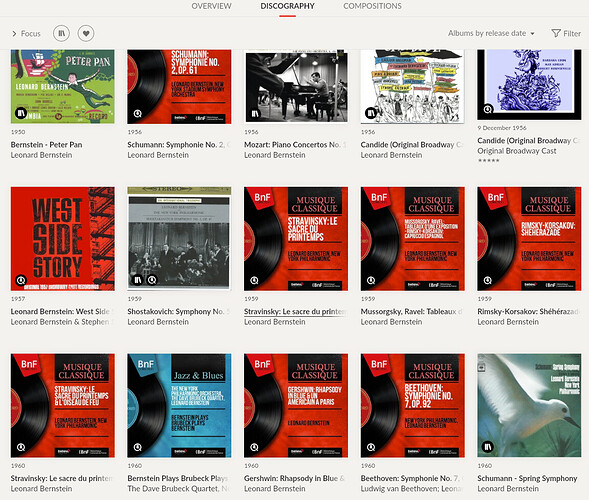 Miles Davis: Again a nearly exclusive BnF artist. Some good music but doesn’t seem to have been very creative. In his recording habits, he seem to have had a certain weakness for some titles he recorded over and over again. There are dozens of recodings of titles like Freddie Freeloader, Blue in Green, So what. 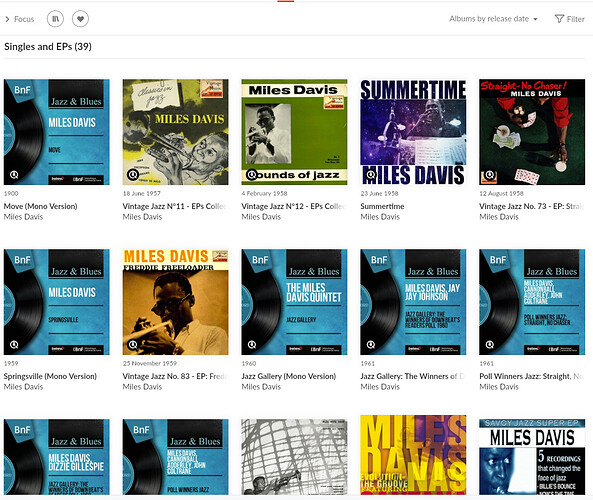 I believe that the BnF recordings are digitised and released by France’s national library. I suspect they’re pushed by Qobuz as the French government has an interest in the service and some of the recordings are “culturally significant”. Many of them sound pretty good but they’re digitised vinyl, not hi-res masters as Qobuz suggest.

They must be qobuz only , I don’t see them in Tidal, I don’t have qobuz

BnF releases may also be found on Apple music, Deezer or 7digital.

There is nothing wrong with BnF but I share @Rainer_Muller ‘s remarks that the discography section is often confusing, incomplete, not ranked by any sort of relevance of particular recordings. And, yes, a lot of junk / spam albums, which badly clutter the „available recordings“ section.

If I look at the thousands of Beethoven „Moonlight“ sonatas apparently available on Qobuz, there are about 500 of „always-the-same-recording-by-Wilhelm-Kempff“ copies: „Beethoven for mowing the lawn“, for painting the walls, for having a pee and you name it…

Overview section would be much better and clearer if there would be setting to remove recommended tracks and albums. They are useless (at least for me) and just makes Overview tab messy (and also slow sometimes). As @danny said Overview should be our view for our collection and without those recommended sections it would be just that and very good!

They must be qobuz only , I don’t see them in Tidal

Yes, junk albums are mainly a Qobuz problem, but only in Europe*. You don’t see the junk with a US Qobuz account.