Asus Zen mesh network with Nucleus and Mac on ethernet

I am not able to add my music folder through network share in Roon. I have read all of the articles that I could find on this trying all of the steps described: exporting iTunes library.xml to the music folder, allowing file sharing including smb, adding local host ISP to path, adding user name and pw with path. I still get Invalid network path specified with all attempts. Any other ideas at finding the correct path would be appreciated

Post a screenshot or two of what you have tried.

Welcome to the forum. Screenshots will help. I don’t understand where your music share is, on the Mac?

You first need to “share” it, do this by hitting + in “Preferences > Sharing”. The smb://blablabla/music path (as shown) is then what’s entered in the watched folder path. 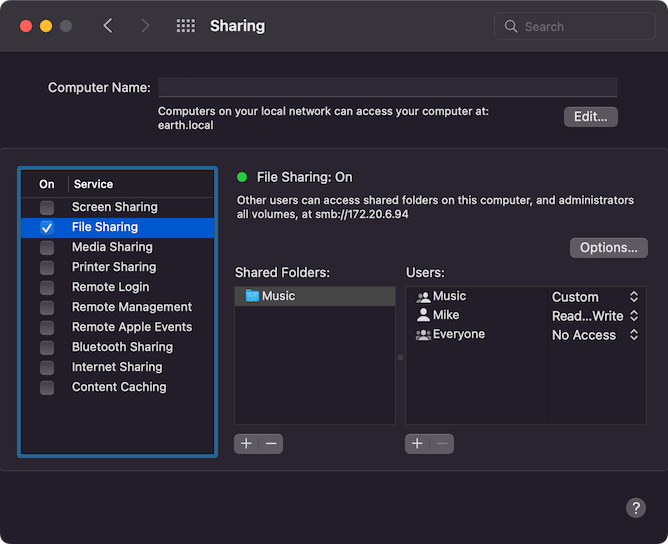 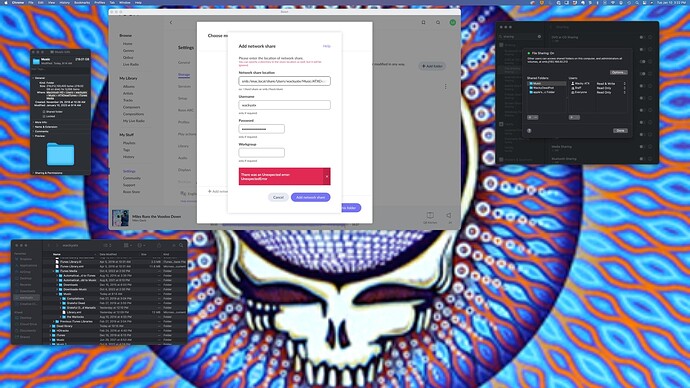 Sorry for the delayed response. Tried replying directly which must not have worked.

I am trying to use music on my mac. I have tried turning file sharing on:

I’ve tried both using my username/pw and not including it, as I read in 1 article that that could be a fix. I have used various forms of the sentence in the network share location box including the IP address listed in the file sharing box. Not sure if I’m missing something there….

Your screenshot is a bit difficult to read, but in the “Add Network Share” screen, you appear to have smb:/imac.local... instead of smb://imac.local...

Just tried fixing that without success.

I suspect the rest of that filepath definition that you’ve used is wrong as well. It looks too long to me. It should be of the form smb://<Mac name>/<shared folder name> only…

Tried it with and without my username and password without success…

FAQ: How do I create a shared folder on Mac and add it as a watched folder in...

If you want Roon to be able to access your music library that's stored on your Mac OS device, you need to first ensure that the folder is properly shared. Once the folder is shared it can be added as a watched folder in Roon. Please see the ...