Advice: Should I Blusound Node or Not?

Howdy. So in my home office I have a Nucleus/KeF’s and a ton of lossless files on an external HD. I use my iMac Pro to control. In my bedroom I use an iPad to control Roon thru two Sonos speakers. So here comes my quandry: In my living room I listen to mostly vinyl through a vintage system. A year or so ago I attached an Audio Engine B1 bluetooth to my Kenwood receiver. Tidal and Spotify sound great thru the B1 to my old JBL speakers. I took it for granted I could not use Roon thru that set up until last week I discovered I could! So, I control Roon via my iPhone. But from what I could see from the play stream when it hits iPhone it’s not lossless. Correct? So I just took delivery of a blusound node 2i but am now asking myself if I really needed it. If I open the box and hook it up I should be able to stream all purple lights/ lossless correct? And will it really make a big difference from the B1 blutooth? I realize this is probably subjective but thought some input here would help me decide if I should open it up or send it back. THANKS!

I would not use bluetooth to stream high resolution music. The Node 2i will use ethernet if you have it hardwired, then optical to your sound system. I don’t like optical, but it’s better than bluetooth, at least any bluetooth I have ever heard.

I agree but the Audio Engine B1 uses aptx bt and is indeed very high quality but still thru the phone right? That is one issue I forgot to mention, the Node 2i will have to be wifi, my router is too far away to hard wire. So kinda worried about that too. Thanks for the reply!

Your Roon core is loaded on your Nucleus which should be connected to your network using ethernet. Your music will flow from the Nucleus to your Node 2i via ethernet back to your router then, ethernet or WIFI to your Node 2i. Which device you use to control Roon does not matter.

I’m no expert but you will definitely get better sound quality streaming over WiFi from your Nucleus to a Node 2i vs. using Bluetooth. I don’t have a Node, but I believe they have an internal DAC which is likely better quality than what you’ve got in your older stereo receiver.

I wouldn’t hesitate opening it up and getting it connected.

How would it go nucleus to node via Ethernet ? Node will be WiFi as it’s too far from router. And yes nucleus is hard wired to Ethernet.

Yeah thanks. Think I’m gonna hook it up

For best results, your Nucleus and Nodi 2i should both be connected to your network via ethernet. However, if you can’t get ethernet to your Nodi 2i, then WIFI will probably work OK.

How did he do it? Run cables thru the ceiling? Or ?

Out an exterior wall, under bottom board of siding, back in through exterior wall. Exact same thing AT&T U-Verse did with my install.

Wow. 200 bux. Good price for that. Well hopefully I can get by using WiFi.

Can’t comment on the Node itself but WiFi should be more than adequate for lossless. I only use WiFi for my various endpoints and have never had problems with my flacs of varying bit depth and sampling frequencies. I’ll avoid any type of ethernet vs wifi rant but at least in terms of the necessary throughput a decent wireless setup can definitely handle it

Well guys I hooked it up. Set up was painless until I tried to play music from Roon via my iPhone. Track was playing, zone was Node, no sound from speakers. But then- I tried Spotify Connect and got music. Then Tidal, got music. Went back to Roon, got music. Only problem is, when I go back to it and just choose Roon, I can see the track playing via Node zone, but takes forever for sound to come thru speakers. In Roon Settings, it shows Node connected to WiFi. Also to Airplay yet I do not have Airplay enabled. Should I ? I have Apple Tv 4K but will enabling Airplay degrade the sound vs Wifi? Here is how I have it connected:
The Node via high quality RCA cables to my Kenwood Receiver ''Tuner" inputs. I can’t use ''aux" as my turntable and preamp are using that. Not sure if any of these locations matter? Here is a shot of my Roon audio settings. Thanks for any help. 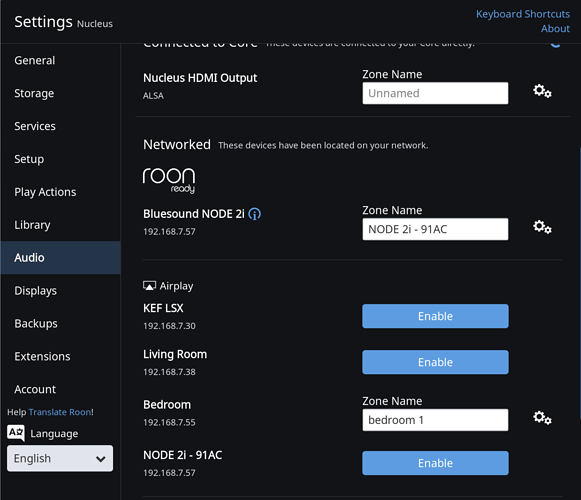 Which app do you use on your iPhone to start the music? The Roon app or the Bluesound app?
I use the Roon app to start music (usually Tidal) on my phone or on a laptop, then I use the Bluesound app on my Android phone.
It detects music is playing from Roon and the app allows to change volume, play, pause and skip tracks.

Sure, but it is not as handy as the Roon app, at least on Android.
The Bluesound app allows volume control with the hardware volume buttons on the phone, and controls are always available in the notification area, while the Roon app needs to load every time again.

Oh I see what you mean now! Will have to try that today thanks for letting me know! Do you have issues with music starting slow like I am? Are you hard wired or WiFi or airplay? Thanks