Streamer is a Raspberry Pi into a Pi2AES HAT.

DAC is a Denafrips Pontus II.

Everything goes into a Luxman L509X out to either Harbeth 30.2XD or KLH Model 5’s (depending on whim…)

The Pi2AES allows for either AES/EBU or i2S. I’ve tried i2S with a few different cables (including a decent-but-not-crazy Audioquest Mocha), and I just don’t like the sound. Seems harsh, and I get the occasional click/pop. It’s weird. The Pontus allows for several different i2s pin configurations, but I can’t find an i2s setting/cable combo that’s as smooth AND detailed as the AES/EBU connection.

I want to try a higher-end AES cable, just to see if it makes any kind of difference, and wondering if anyone has opinions on what the sweet spot might be.

I’ll buy used, for what it’s worth. Let’s keep the budget under $1000 as much as possible.

PS: I have a slight hankering to get a Lumin U2 Mini, which would employ the same AES/EBU connection.

Now do the same question, only under $50…

I know this one is a bit above budget: 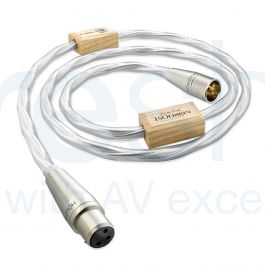 Nordost's Odin 2 range is the 'Supreme Reference' for top-of-the-range audiophile equipment. Each component of the Odin 2 range is meticulously crafted to ensure the most performance out of your system. The Odin 2 110 Ohm cable is perfectly matched...

But it does come with “free” burn-in

But seriously, those Mogami cables are well respected in the pro-audio market. Maybe you would consider spending a little more on hand-made pro-audio cables before going all-in on audiophile brands. Maybe something like Van Damme?

I’ve used Pi2AES I2S with Holo DACs with a run-of-the-mill HDMI cable, and AES to Holo and Schiit DACs with Blue Jeans cables. Never any problem, excellent sound quality, no glitches. I doubt you have cable issues, more likely something with either the software on the Pi or with the DAC.

I doubt you have cable issues, more likely something with either the software on the Pi or with the DAC.

But I’m happy with the AES connection, so I thought i’d try to experiment down that path with different cables. Because the Pi2AES doesn’t go over 192/24, AES is plenty good.

Yeah, $1000 budget is crazy, but there are a few on the USAM around $500, and I didn’t freak totally out about possibly trying them. I sold a few other pieces of gear, so i feel like i have a little mad money in the cable kitty.

Go for it as long as the supplier offers a money back guarantee. Do report back on your findings.