After Ver 1.7 Issues with high res files in the Airplay Zone

Core and NAS connected to the network via gigabit Ethernet, Airplay devices via wifi

I have a mix of CD quality and high res AIFF files in my NAS. Since the ver. 1.7 upgrade I am having a problem streaming high res (greater than 16 bit 44khz) music files to the airplay zone. I often do this in a shuffle play mode. Music always starts fine (so no network or wifi issues) but when a high res file comes up in the queue, music stops. Even tho the music stops, the file “advances” in silence. If I do nothing and a non-high res file comes up next, music is heard again. I can also get the airplay devises to “sing” again by pausing and clicking on play. Problem never happens when shuffle playing high res files to my non-airplay zone. Also never happened while streaming to the airplay zone prior to the ver. 1.7 upgrade.

I’m a big user of shuffle play to my airplay zone so I’d appreciate your efforts to address this.

My understanding is any airplay devices only support max 16/48k

Yes that is true but Roon drops the high resolution files down to 16/44K so they can pass to the airplay devices.

I can get them to play just by pausing and restarting, it’s just not seamless in the shuffle play mode like it used to be.

Maybe for that zone force a resample of all tracks to 16/48 and see how that goes in the DSP settings. At least as a work around to troubleshoot

Thanks for the tip!

I’ll see if that works. Won’t know for sure until the next high res track shuffles up in the queue…Thanks again

Well, the change in the DSP settings did not solve the issue, but I found something else that appears to work. I added a 1 sec of crossfade time to the Airplay zone. Not sure why this became an issue with ver. 1.7 or why this appears to solve the problem. Perhaps the crossfade helps the downstream DACs stay locked while the songs with different resolutions are changing. 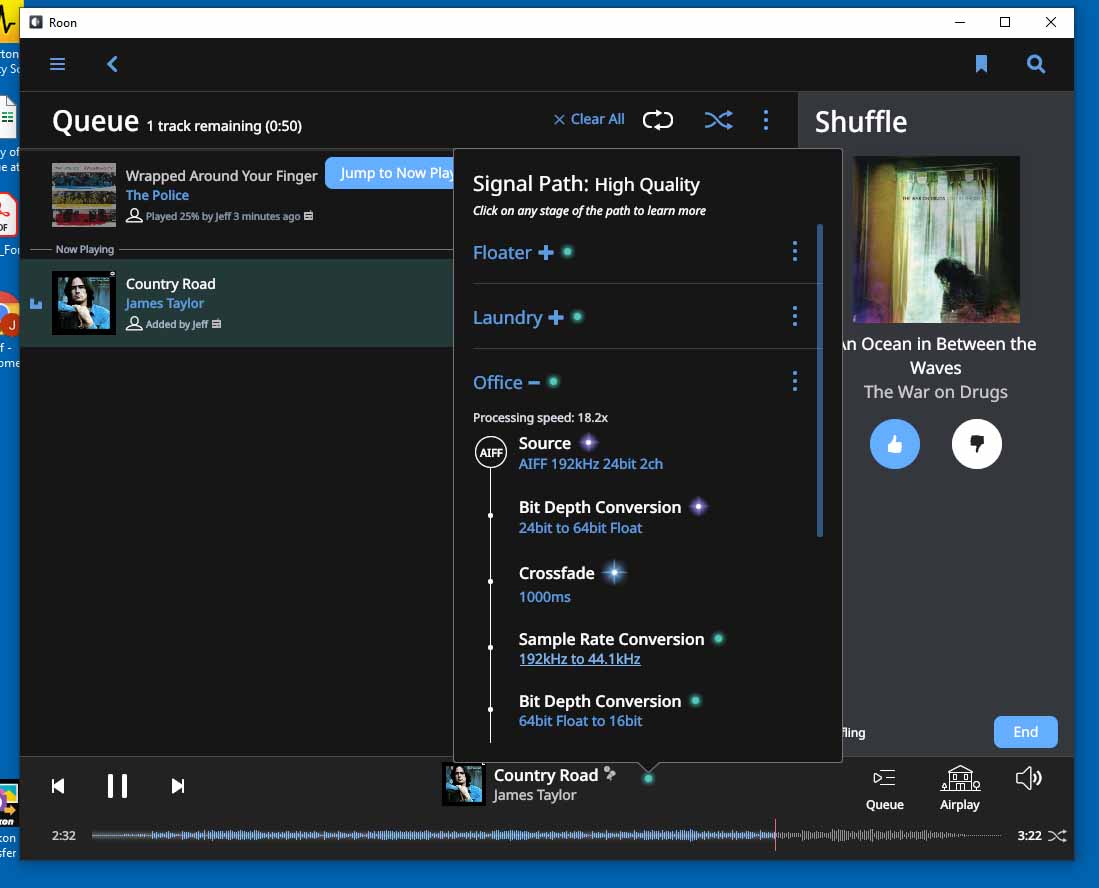 The James Taylor song is a high res file and started seamlessly as the 16/44.1k Police song ended… 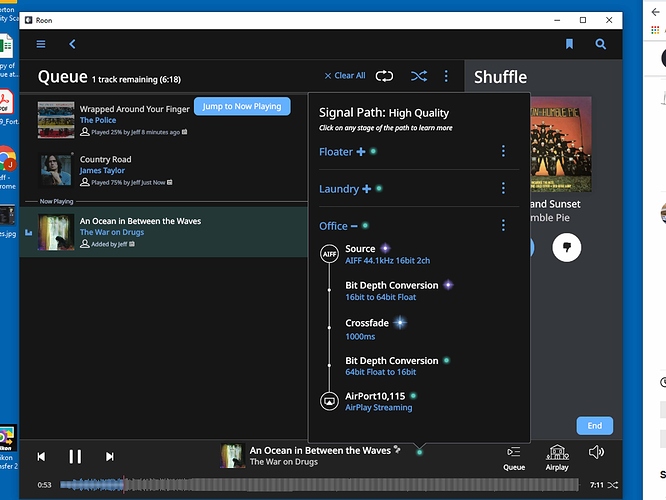 I’ll keep monitoring this for a few days & if the shuffling of the airplay zone continues to be seamless, mark this as solved in a few days.

Does this behavior happen with all of your AirPlay zones? Does it happen when AirPlay zones are played to individually, or only when you have the zones grouped?

Thanks for reaching out.

All of my airplay devices (I have 5) are in a single zone. When I stream to this zone, all devices are on. When this problem occurred, they all stopped playing.

Could you try isolating the devices so that you’re only playing a single zone and testing high resolution playback. It would be helpful to determine if this behavior only occurs during grouped zone playback.

@Jeff_C_EE are all the devices the same type…and is the connection all the same wired or wireless?

All but one are Airport Express devices connected to the network via wifi. There is one wired cat 6 device which is a Bryston BDP-3 which is capable of emulating airport express.

Still testing the endpoints in a single zone mode per John’s request this morning.

I have been testing the endpoints in single and grouped modes for several days now. My results have been mixed and difficult to repeat. In general, a single airplay endpoint is less likely to stop playing than a grouped endpoint when a high res file comes up during shuffle play. About a 75% success rate with a single endpoint vs. 50/50 when grouped. When a high res file does not play, there is a momentary pause in the movement of the red slider bar, kind of a stutter before moving along in silence. As always, pausing and restarting play results in normal playback. Seems like the DACs are losing lock during the stutter?? Some of the downstream DACs connected to the airplay devices (mostly Airport Express N and dual port N types) are more tolerant than others. They have all stopped playing singly or collectively at one time or another.

My best cure for this problem has been to add 1 second of crossfade. Works about 95% of the time.

This is an issue with many variables and not occurring consistently so probably too difficult to find the root cause. I will mark this one as solved and give thanks to John in Support and Mr Fix It for your assistance.

Those that are experiencing this problem should try adding a 1 sec crossfade.