They say that age is nothing but a number, but something weird happens when Roon combines musicians’ photos in a group line-up. Take, for instance, Jefferson Airplane. It looks as if Grace Slick and Paul Kantner were in a band with their grandfathers Jorma Kaukonen and Jack Cassidy!
Ideally, there would be an algorithm that synchronizes pictures in age!
Click on the album Surrealistic Pillow and you get the same shot of Jorma as if he was 70 at the time of the album’s release. (And Grace of course ‘forever young’).
It’s sort of a funny effect, but it fweels wrong. 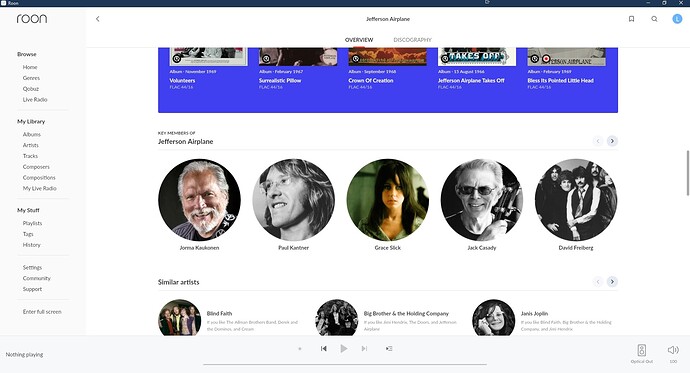 For all bands that have existed since the 60s/70s:
What ‘age’ would you like them synchronised to?
What band line-up would be your preference for the group shot?

With 250,000+ Roon users, there may just be a small amount of difference of opinion (to put it mildly) as to the answers to those questions.

Valence Art Director has already put all those photos to the majority vote (and annoyed some users in the process as it has removed their favourite band photo), so there is no easy way to deliver on what you are suggesting without throwing all that out and starting again. Is it really worth it?

As artists age and band lineups change, no single photo can cover all states. However, it does feel odd to have pictures that have nothing to do with the peak of an artist or the time of the original release of an album. I believe/hope Danny may have hinted at something here:

I’m so excited about the other crowd sourced project under the Valence umbrella: Quantum Timelines. I’ll write about it early next year.

Hello Anthony,
I know, it’s an impossible task. I merely wanted to point out an unforeseen side effect of deciding on one particular image of a musician. It would be interesting to check if there’s a pattern in the ‘majority vote’: is the photo age’ of female musicians predominantly young and that of male artists mostly ‘older’, or vice versa?
Something for a rainy day and when there’s absolutely nothing better to do (which usually there is).

Valence Art Director has already put all those photos to the majority vote (and annoyed some users in the process as it has removed their favourite band photo),

Art Director won’t replace any band or artist photos that you’ve customized in Roon on the artist page. There have been some anecdotal reports of this happening but that’s not how Art Director works. If that’s occurred in your database it’s not a result of our new image features, something else may have happened. We’re sorry to hear that.

You will see crowd-sourced images on your Now Playing display in lieu of custom images. That is as intended but your custom photos are retained on the Artist Page. Here are examples of custom images I’ve added to Roon artist pages, all have been retained.

Art Director won’t replace any band or artist photos that you’ve customized in Roon on the artist page.

I never said it would, just pointing out the current state of affairs regarding how Art Director has replaced the previous images used by Roon. Of course you can customise if you really want to but the OP request was for some Roon based solution to the issue. My point still remains, is it really worth it?

Thank you for clarifying your post. I appreciate that!

You pretty much achieved - hammer, nail, head with your statement:

What ‘age’ would you like them synchronised to?
What band line-up would be your preference for the group shot?

Art Director was developed in response to customer demand to improve artist images and overcome the shortcoming of AI face recognition. No single, or small selection, of band or artist images, is capable of satisfying everyone who uses Roon. Putting the selection to a vote seemed the best way to do this and simultaneously empower our customers.

If a favorite photo was removed it can be replaced with a custom photo on the artist page. Other displays, such as the avatar images for The Jefferson Airplane, are the result of Art Director votes.

The best way for @Leo_Reijnen to correct this is to find age consistent images of Kantner and Grace Slick to match the others, upload them, and put them to a vote. My suspicion is that Girl Scout Grace will still win out!