Description Of Issue
I have three copies of the track “Alabama Song” in my library (on The Doors album by The Doors, on Scary Monsters by David Bowie and on Stage Live by David Bowie). All three copies have the text “Apr 1927 - Apr 1929” in a smaller font after the text name. This text is not present in the track metadata on disk and is not editable. It is also present on all the Tidal and Qobuz tracks of this song by Bowie and The Doors. It is also happening on a different track with the same name on the Qobuz album A Clear Midnight by Julia Hulsmann. Interestingly on the latter track this is also happening (with different dates) on other tracks in the album. Please see that attached image for examples. 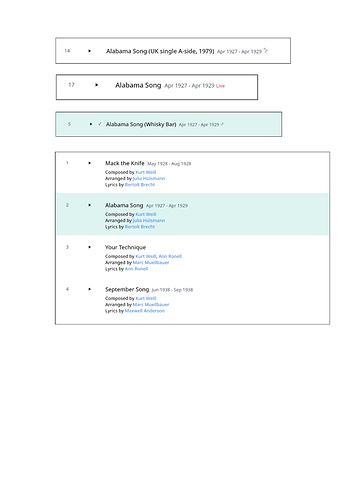 What is this, where does it come from and can I get rid of it?

where does it come from?

Click on the 3 dots at the end of the track and goto composition. There you will see that (apparently) it dates back to a composition by Kurt Weil between 1927 and 1929.
Why it’s appearing, I don’t know. It doesn’t usually show.

If you wish, you can edit this composition data (usual 3 dots edit on the composition screen). At the moment, I don’t know another way to stop it appearing.

Yes, that worked. Many thanks.

I think that the Bowie and Doors recordings are erroneously linked to the Kurt Weill composition as it is definitely a different song while the Julia Hulsmann piece is correctly linked.

Nope, the Doors version is based on the Kurt Weil/Bertolt Brecht composition. They changed some lyrics and some melody lines, but, Morrison knew Weil’s work.

And the same for Bowie.