There is an album on Tidal that fails to stream via Roon and Tidal’s desktop app, but that same album streams without any issues via the Tidal mobile app.

I know that this is a Tidal issue, but I have gotten nowhere with their support and wanted to ask whether this is something that you can possible help with?

If so, I will provide the particulars.

What album? Happy to see if I can stream it.

Had not heard of Ottmar Libert. I liked what I heard. Adding his albums to my library.

Thanks for giving it a try and yes, it is a Tidal issue. But they have been no help in addressing it.

The album works, in its entirety, on the Tidal mobile app!

Glad you liked it and you should give a listen to his entire library, it is fairly vast as he keeps putting out releases. And, his styles and mood of the albums changes pretty dramatically over the years. I have been a fan since 1990, with his first release, Nuevo Flamenco!

I am also able to reproduce this issue. This issue appears to be on TIDAL’s end so there is not much that we can do on our side of things. I tried to play the track using the TIDAL app and I saw this unending notifications of issues appear: 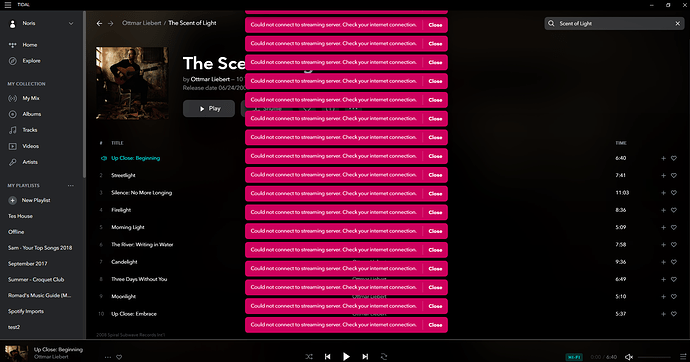 Any thought on why it works on the Tidal mobile app, but not on the Desktop?

Seems like Roon utilizes the Tidal desktop streaming service versus mobile, since it fails on Roon as well.

Either way, I know that it is a Tidal issue, but wanted to know if it can be addressed through the development channels that exists between the 2 companies??

It is possible that TIDAL uses two different APIs for mobile vs desktop, I can’t say for sure but this is my theory. Unfortunately, the dev channels are not meant to be used for specific album issues, if the problem is on TIDAL’s end and the issue doesn’t relate to Roon then a regular TIDAL support ticket has to be raised, which I assume you already did. Wish I could help more here, sorry.