Hi,
I own many duplicate CDs. It not unusual to own several versions of a single cd such as Dire Straits, Money for Nothing. I have the original cd, XRCD, MFSL, Super Bit Mapping, SHM CD, etc. I’ve painstakingly tagged these CDs so they showed up as separate albums using jRiver. In jRiver the tags are correct. ROON finds the MFSL usually, but lists the others as duplicates.

I certainly do not intend to reedit and and sort out this mess.

I also have not been able to find the area in ROON as in jRiver where all the tags are displayed.

This is not a good experience for those of us who tries to find the best versions of their favorite CDs.

Roon has automatic album “version” extraction from both the ALBUM file tag and the folder name containing your files (though a completed bug-fix is pending release in the latter case).

Hi,
I have written my album tags like this. Works great in jRiver.
Examples:

FIM Money for Nothing

MFSL Money for Nothing

SACD Money for Nothing

ROON does identify most of the MFSL versions.

I think that should be the way it works. Who wants to go through 11 tb library and retail everything again.

Also where in ROON can I access all metadata tags in ROON. I would need those to start fixing the problems.

A friend uses Squeezebox and he identifies his versions the same way and they are displayed correctly.

Hi @Sgr – we know many of users own multiple editions and versions of the same album, and we know how important it is that you’re able to sort and organize them in a sensible way.

As Joel mentioned, Roon has functionality specifically built for this. The goal is let you organize the different versions exactly how you want, without losing the context of the album – when it was released, what the albums is called, etc.

Roon will extract bracketed information in album titles (and folder names once our next release goes live), so this: 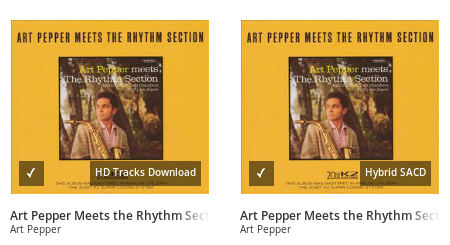 The various editions can also be grouped together, so it’s easy to pick your favorite while still having easy access to the other versions. More information on that here.

SACD Money for Nothing

We extract bracketed version so the original album name can be preserved, but this formatting isn’t something we’ve really seen before in common use, as far as I know.

One thing to keep in mind is that you don't need to change album titles to browse by format -- [Focus](https://kb.roonlabs.com/FAQ:_How_do_I_create_a_smart_playlist%3F_How_do_I_save_a_Focus%3F) can do that easily and automatically.

Finally, if you’d like to use the album title tags embedded in your files, that’s also possible. Just select an album (or all your albums), click Edit in the top-right, and then choose Prefer File for Title:

[quote=“Sgr, post:3, topic:12308”]
ROON does identify most of the MFSL versions.
[/quote] Actually, it’s the other way round. When Roon identifies an album successfully (and it’s not just from your file tags), it presents the canonical name of the identified album from our metadata service (though this can be overridden as @mike has described).

When Roon is unable to identify an album (and unusual tag formatting such as yours can contribute to identification failure), it presents the contents of your album tag as the album name.

But note that identification is a fundamental part of Roon which adds rich metadata to your collection.

I’ve got a number of XRCD albums with that moniker in brackets in the folder name. However, since 1.3 Roon no longer identifies the version as such. Show album version is turned on.

That fixed it. Thank you!