Glad to help. Wow, that’s cool you took those photos.

Yeah … I’ve been doing that too. Very time consuming.

Which makes Roon’s insistence on not using the artist tag for the ‘Perfomed By’ info, and using whatever it has found in it’s meta data particularly annoying.

The now playing screen can look pretty good, when everything works. The trouble is, that appears to only be wit about 10% of my library

I definetely second this. Hoping getting the prior look back. Why has it at all beeb changed? Is the reason a new employee at Roon, who is in a postion for should be able “to show something” - making a difference? Maybe. 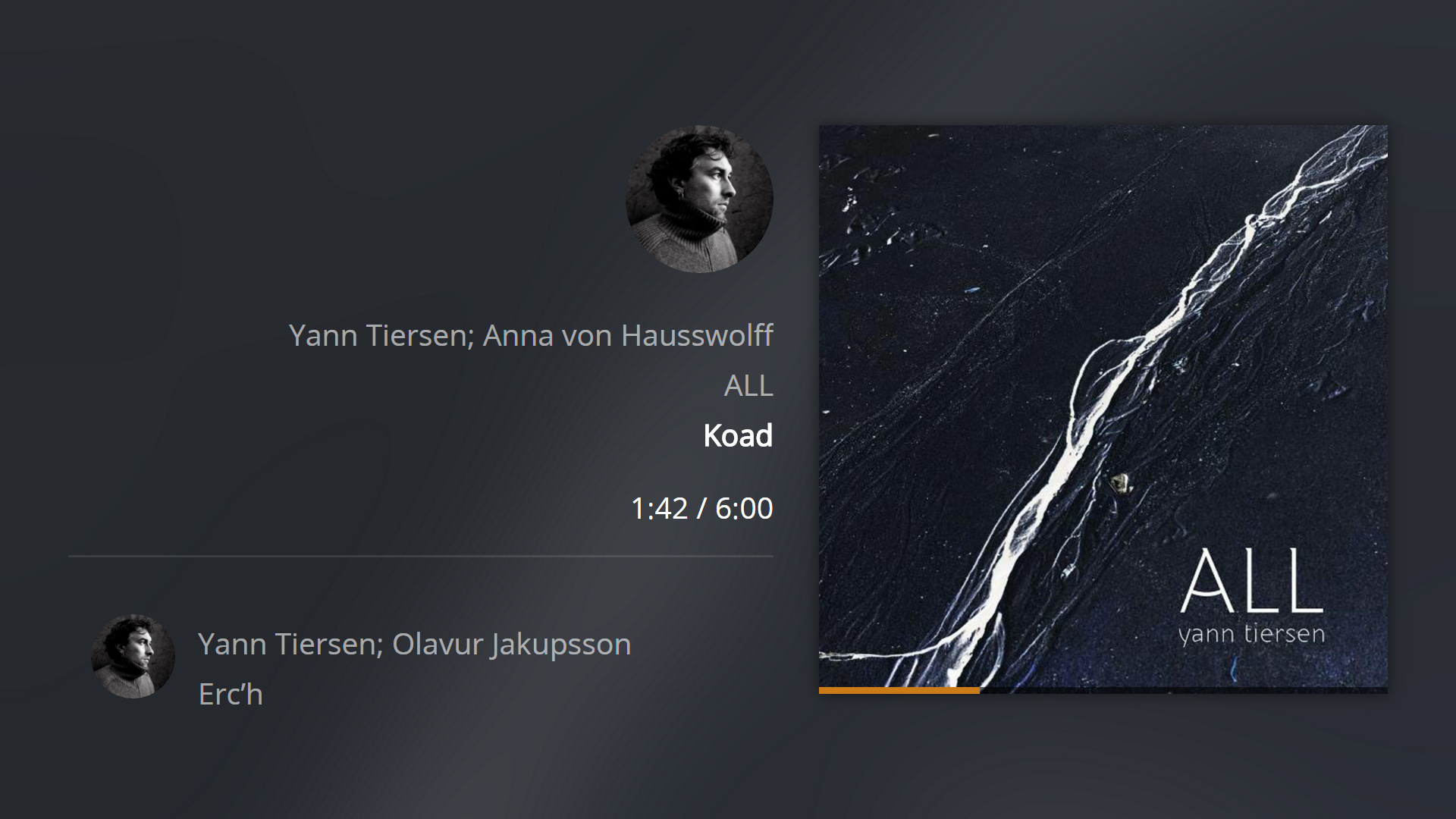 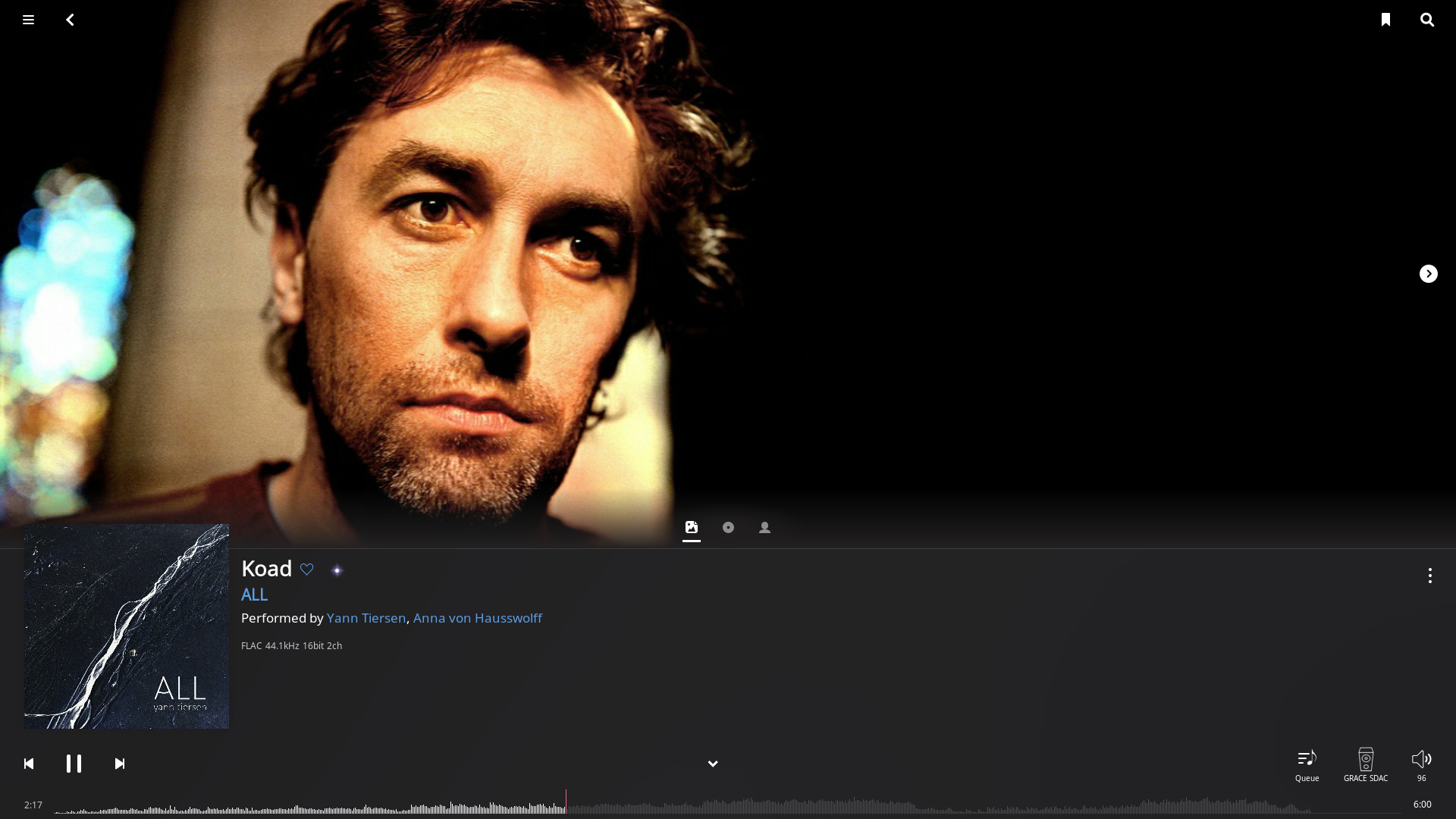 Hi audiophile folks !
Here is another rant about the new Roon GUI (especially the new now playing screen, yes, complaining again…). Here are two screenshots I took from py PC from Plex Media Player now playing screen and from Roon now playing screen of the same track.
First and foremost let us acknowledge Yann Tiersen is fairly well-known in both Plex and Roon databases so what I am about to criticize would not be as obvious for everybody as it is for me.
I LOVED Roon 1.5 now playing screen : it had a real premium feel to it, no matter which unknown album you were listening to this feel was always the same, elegant, simple yet impactful.
Here is what bugs me out : the feel is now way more premium on Plex side (and it’s free) than on Roon (i don’t use to criticize its price but now it gets more and more obvious…). Why do you guys not let people still have a choice ? I reckon things have to change every once in a while but as clients, we deserve to get a choice, I think I deserve to display the album cover in wide if I prefer the now playing screen to look like this, instead of random artist pictures - very often badly framed - if not completely absent.

I LOVE Roon, this brilliant software fills my audiophile needs, but these days I prefer to use Plex, and this is the kind of choice I’d like not to have to be making.

Thank you for your reading !

They’ve already said they are bringing back album art.

oh thank you then though I hope they will fix this quickly (Plex Media Player doesn’t do gapless playback, such a shame)

Next time a quick search of the forums might save you a lot of typing time.

Well I gotta say I genuinely thought I had done enough research on this topic but I still wasn’t sure they were to re-implement this feature.

No probs, that’s what the forums are for.

I really like the new Now Playing screen. It’s what I’ve been wanting since signing up as a life members couple of years ago. I’m always wanting to be able to quickly see who is playing on this track.
And I can configure it to show Track Artists or Artist Photo as a default.
One change I’d like: if there is no Track Artist info, the Album Artist info should be displayed by default. I’m having to take time to add my Album Artist info to each Track - not good!

Having wanted Track Artist info for such a long time, now I have found I really like being able to see the Artist photo: it’s more personal. Good artist photos are mostly pretty easy to find on the internet, can be incorporated into the Artist info & don’t take long to be cropped for the vagaries of the Now Playing display. Once the photo optimized, it’s all good.

I much prefer seeing a large portion of the Now Playing screen taken up with the Artist Photo than some of the Album Art (thinking of ACT Music albums in particular).

Thanks for Roon 1.6 Now Playing screen.

Sorry to resurrect an old thread, but my Now Playing screen now has no options than to display lyrics.

Hi guys, huge Roon fan. To echo what everybody has said everywhere….PLEASE CAN WE JUST HAVE FULL ALBUM ARTWORK ON THE NOW PLAYING PAGE (INCLUDING CHROMECAST ETC)??? rather than these lame photos of artists! It is entirely anathema to the spirit of presenting an artist’s work as it was intended to have their carefully crafted album artwork dwarfed by some photo that is either irrelevant or entirely awkward.

PLEASE CAN WE JUST HAVE FULL ALBUM ARTWORK ON THE NOW PLAYING PAGE (INCLUDING CHROMECAST ETC)??? rather than these lame photos of artists!

Hi Roon team, please don’t do that. Artist picture and album cover is great as it is (maybe the cover could be a bit larger). Thanks.
No offense, Jeffrey, but different people have different preferences.

Fair enough that people have different preferences. To be clear I was suggesting it as an option as opposed to them changing the format.
Personally, I think it’s odd that music would be presented with photos that are not part of the artwork.