Hi, just to build on the thread related to the UI, I believe that lyrics used to look much better (more along the lines of an album sleeve) and more premium before (smaller fonts, serif fonts…) than the new 1.6 version that look just like a karaoke version except… they do not follow the music.
I would rather have a small box with lyrics when I look for it than seeing lyrics right in my face.
And, yes, the design of the Now Playing screen can be rearranged by someone less techi and more graphic-savvy.
Artist photos should also vary, some old bands (like Yes) used to look MUCH different in their hey-days than the photo that is showing a bunch of old guys. Not that it matters much but if I listen to a 70’s release, I do not particularly feel like seeing the band in their current state!!
Thanks for the good work. T

Just to check, all these large cover art requests from home theatre and large screen users I can see are valid, but I just love it as it is sitting here with my laptop on my knees! Maybe the cover art could be a little larger (30-50%?) for sure and a few other items included on the screen as others have requested, such as ‘2 of 12’ track place in queue info, Date of Release (with a toggle in settings for Original or latest or whatever), maybe the Label (when you can link it outside the library into Qobuz proper), plus a heart ‘like’ icon too would also be handy and definitely a link to track credits in the ‘…’ menu - but let’s not over clutter the new design I like it very much just as it is with the artist pic top centre stage and the album cover smaller!

So apart from all of that lets not clutter it

I vote for clutter. I don’t mind info or options anywhere relevant.

Agreed with a resounding YES! I’m extremely disappointed with the lack of an option to display large album art, which changes with the track playing, in the new Now Playing screen. So many other options available now except for the one most important to me. I want Album Art as big as possible, not some stock photo of the artist staring at me, or lyrics that don’t advance along with the track.
Please guys…please! Seems like a no-brainer. I’m not arguing to take away other options, just give me back this one

I’m with you. As we patiently wait for a fix…

Totally agree, I like the new interface for my Roon Display but there should also be an option for both Remote and Roon Displays to have a simple large scale, high resolution Album Art display. Common sense! Maybe a large one in the center with faded ones to left and right for previous and upcoming (given the aspect ratio or laptops and TVs it seems this would make sense).

Has anyone seen a timeline for the promised option for what we had before? I keep checking but no…

Not sure What we had before is very specific. The change to add album art etc have no associated timeline.

The Roon guys don’t give timelines, but I think they’ve said it’ll be in the next update (so maybe we can give it a rest, pretty please?).

I’m with you. I honestly thought they’d issue a fix on that pretty quickly since it was messed up. Fix the other stuff later but give us album art back. I can only assume they’re redesigning the whole UI? It’s disappointing. I give up on thinking this would be a quick fix.

Cheer up, it will be ok soon…

Dude. I’m really not that sad. Just showing frustration. I get it. Your comments are more annoying.

Sorry I tried to lighten you up… that ain’t gonna happen, ahh well__

I agree with Steve. Roon should do all they can to avoid displaying a 2/3 empty screen. It just looks dumb. I suggest displaying the artist photo if you have it, and revert to the album art if you don’t. How could that be hard?

How’s this? Just replace all your artist photos with your favorite album by that artist. Voila, done.

Seriously, I too thought Roon would just fold in the album art capability in a few days but maybe it just takes longer than that, and they are going to roll out with some bug fixes, etc. I mean, you wouldn’t want it to display album art but have some major bug, I don’t think.

Haha. Yeah, I imagine it’s gonna contain a ton of “fixes”. Just surprised it was released with so many “bugs”. Roon 1.7? 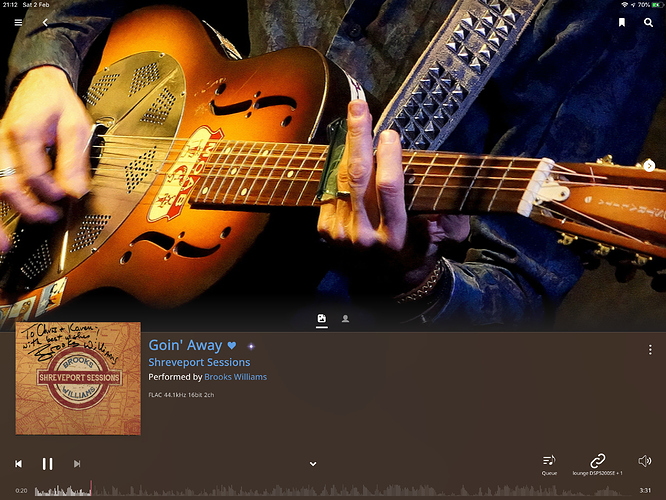 How’s this? Just replace all your artist photos with your favorite album by that artist. Voila, done.

Cool! Did not realize you could edit the artist to use different photos. I’m using it right now, not for album art, but for replacing poorly cropped images or otherwise annoying photos.

Bonus, I can use photos that I took myself. If necessary I can crop them myself to fit better. I’ve got photos of Leon Russel, the Allman Bros, the Rolling Stones, the Neville Bros., the Black Keys, Alabama Shakes, Robert Plant and some others.

Thanks for the heads up!