Here’s an example. I have 2 DSD versions of Miles Davis’ “Kind of Blue”. Neither shows up in Roon search, or in the Miles Davis album section of Roon. I happened to have one of them saved to a playlist, so the only way I can access the album is to go to that playlist. Once I access the album, the metadata tags all appear like normal, Roon recognizes both the artist and album names, etc.

The second DSD version is inaccessible at all via Roon. I have this issue with a few others albums as well.

Things that show up easily in Audirvana, Amarra, HQPlayer, JRiver simply do not appear normally in Roon.

How can this be solved?

Are the albums there as different versions of Kind of Blue?

If you pick the Kind of Blue album you do have, see whether Roon might be “stacking” them under the “Versions” tab. This can be overruled by going to Settings > General > Show hidden tracks or albums.

Alternatively they might be being skipped. Go to Settings > Library > Skipped files and see whether they are there. I did find a whole load of mine were skipped once as the folder names had a trailing blank space in them. Roon will tell you why they are being skipped. Do they have DST compression (not sure whether this would make a difference).

Yes, I have 2 different DSD version of Kind of Blue… Sony Japanese and MoFi versions. Thanks for the tip, enabling “show hidden tracks or albums” made those disappear.

I have an HD pcm version of Grateful Dead, 3/29/1990 Nassau Coliseum. It shows up like normal in iTunes, but no matter what I do, Roon does not recognize it. I have other versions of the show, so its not a big deal. Just can’t figure out why. It does not appear in Skipped Files.

Hey @DancingSea — Thanks for sharing your report with us!

I have other versions of the show, so its not a big deal

In Roon if you navigate to the version that you do see and go to the Versions tab, do you see the album? Roon will group multiple versions of an album so that it only shows up once in your browser, but once you navigate to it you can see all versions. See my screenshot below of an example of this: 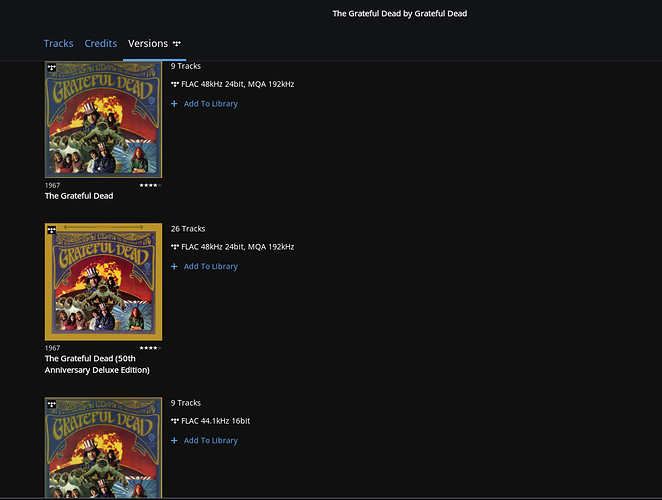 Yes, just a few songs should be okay for the team to test with. Thanks @DancingSea!

Its been a month, did you ever test the file?

First I wish to offer my sincere apologies on the delay here.

I had a chat with the team today regarding their findings, and unfortunately we have not been able to reproduce the behavior you mentioned above.

In order to further aid the team, we are hoping to gather some additional information from you about this. Since we are unable to reproduce on our end it appears that there is something environmental that is likely causing you to see the behavior.

Additionally, if you go to tracks, and filter by the path of the album, can you confirm whether or not any of the tracks appear here?

The entire Dead show in question is stored in my iTunes library on an external USB hard drive. It appears like normal in iTunes with no issue. There are about 45K tracks in iTunes, all of which, as far as I know, appear in Roon - except for this Dead show. Its stored in the standard iTunes self created library system.

None of the tracks from this show appear in Roon. I even tried to manually import the show into Roon, and it still does not appear, though no error message was given on the import.

Thanks for the details, @DancingSea!

Can you share a screenshot of the folder the album is stored in? Are there any special characters in the path?