With a library consisting of only local music that is all consistently tagged, when searching for a band name, for instance, “Fourplay” and having clicked “VIEW ALL” in the Albums search results, Roon leaves out a few albums in the “All Album Search Results for Fourplay” view. Listed are 18 albums (including collaborations) while when clicking the Artist Fourplay in the initial search results all 22 albums are properly listed under “Main Albums”. Oddly, one of the albums that is missing from the “All Album Search Results for Fourplay” view is a regular CD rip with same band name in the metadata for artist and album artist, which is the same as for all the albums that are shown. What is the discrepancy here?

I wonder whether it’s because there are a lot of matches in the general search? That will be showing albums with matching titles, artist names, composers or even track titles.

I can’t remember the exact number, but there is a limit to how many results gets shown at that stage - somewhere around 50 to 60. Is it possible that your missing 4 are just beyond the end of the list?

Once you are restricting the search to artist names only, you get the result you want.

Another thought…
Are any of those albums duplicates? The general search won’t show them, but depending on your Settings > General > Show hidden tracks and albums, the albums shown in the artist’s page might.

Hi Brian, thanks for your response.

Show hidden albums is enabled, and as there are only 22 albums for this artist and only a handful of other matches, I don’t think that the results limit is causing this. Below I have copied in some screenshots to help illustrate the issue. While doing this I also noticed that the “View All” option is only there when the window occupies half my screen. In full-screen mode, there is no such link.

BTW I wonder if it has to do with the Hi-Res versions that I have next to Redbook CD rips. The results seem to leave out the latter.

Initial search results - 12 albums and no “view all” option: 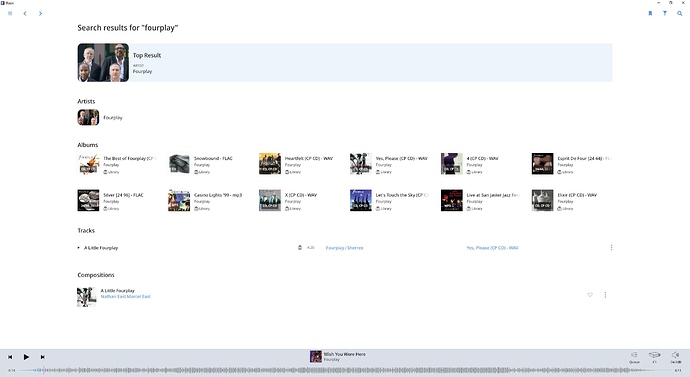 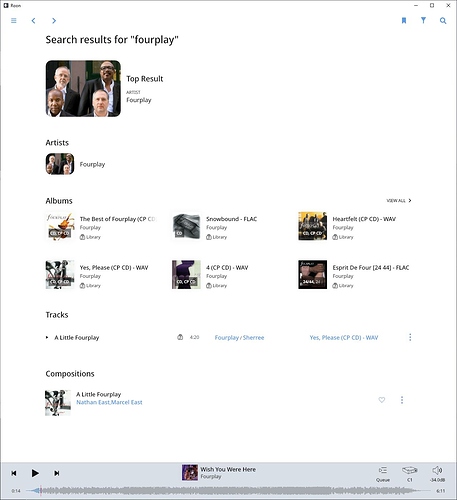 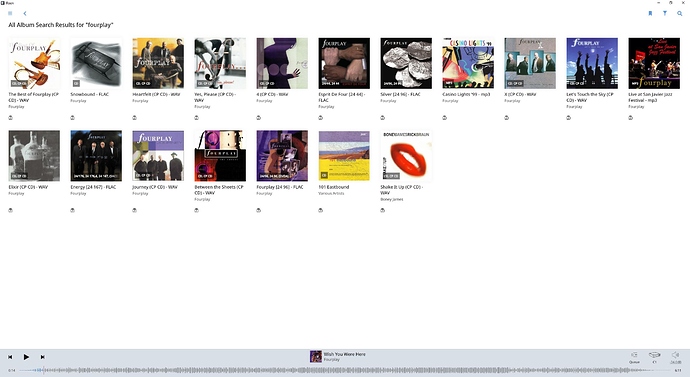 Having clicked Artists in search results does show all 22 albums 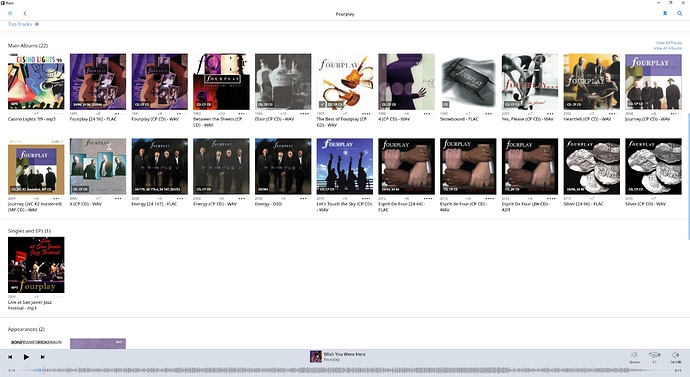 And you are indeed seeing the duplicates in one display, and not in the other. Duplicates can consist of hi-res versions of an album; i.e. the albums don’t have to be identical.

This is as designed; the general search will not show extraneous albums at that stage. Once you have selected an artist and wish to see all albums, it is up to you as to whether you show duplicates or not, via that setting.

The issue about view all not showing when it should sounds like a bug.

You have several versions of some albums (flac, wav dsd). In some views these get rolled up together, although you can set which “primary album” is on top. But in other views you see all the different versions. Personally I would prefer to see only one album version in all views with album counters that match in all views. I seem to recall several feature requests although I may be mistaken.

Edit. I have cross-posted with Brian. I make much the same point.

Hi Tony, while that seems logical, I would then expect to see an indication that there are multiple versions of that particular albums as well as a link to look at the others but this is not available. Besides, “show duplicates/hidden files” is enabled.

When I click the hi-res version for an album that I also have the CD rip of, I do see the other album under the “By this artist” column. 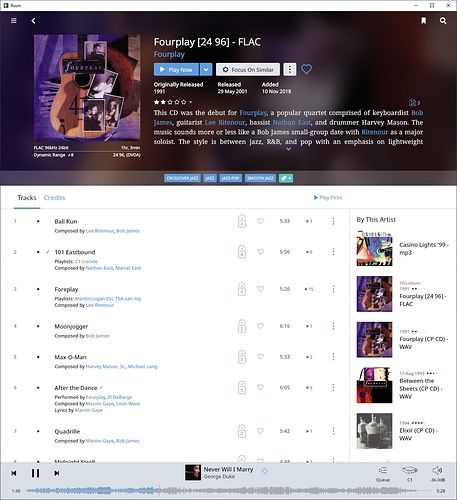 From looking at your screenshot it is evident that not all “duplicates” are so - one might have expected 6 by my count.

So, do you fail to see a versions tab on two of the other potential duplicates, and if you toggle the hidden album switch, do you now see 18 albums?

Either I fail to understand what you are saying Brian or I’m not getting my message across. My point is that I would expect to see all albums, hi-res and redbook, in the search view and if it is normal that this is not the case.

In the case of the Fourplay - Fourplay album, they are not actually duplicates but different resolutions of the same album.

The hide albums switch was already off but I toggled it on just for good measure and that did not change anything, and off again also made no difference. Even if switched to hide duplicates, both of the above albums still appear separately in the Main Albums view but only the hi res one appears in the Album Search view. In no case do I see a versions tab for these albums anywhere.

they are not actually duplicates but different resolutions of the same album.

From the Roon KB

When Roon finds albums in your library with similar artist and album info and similar lengths, they are considered to be duplicates.

So they don’t have to be identical. That’s why I thought the two search results (General magnifying glass search and artist album list) would produce different results.

Now if the search results (as shown in your final screenshot) don’t change when you change the hidden settings, as well as never seeing a versions tab, then I’m confused and my explanations are evidently wrong.

Over to the experts…

I would expect to see all albums, hi-res and redbook, in the search view

Yes. I often see this as well. But normally I group these alternate versions of the same album so that at least on this screen and several others (but not all) I only see the “primary” version of the album. I have no solution for you for reconciling album counts on different screens, or why roon displays only primary albums on some screens but all versions on others.

Thanks Brian, good to know. It’s not a big issue at all, just wondered about the mechanism behind it.

I am having an analogous problem. I have a very large collection that’s mainly classical. If I use the mag glass search for beethoven I get 49 results. If I search for Ludwig von beethoven I get 48 different results. Together they do no come close to the total beethoven albums. I always operate under the theory that I can’t possibly be the only person to have a problem so I assume there is an answer. But I can’t figure it out. This ought to be easier. Is roon simply not deigned for large collections?

The magnifying glass search should have found Ludvig for you as the top result. (The various categories shown are always limited to 50 or so in the search results.) You need to select Ludwig as a composer. Now you can view his discography which in my case (with Tidal) shows 9162 albums with Beethoven compositions.