All multi-disc albums are now unidentified 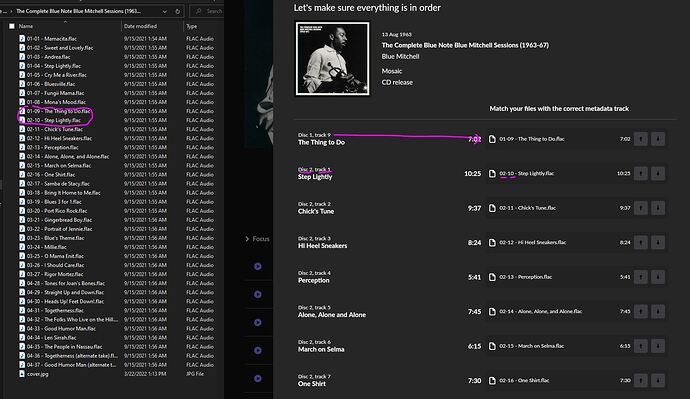 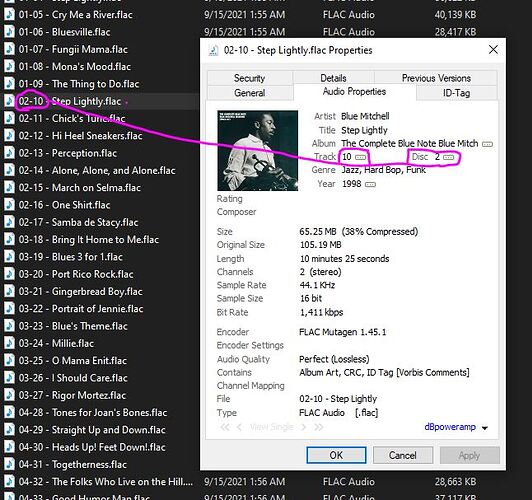 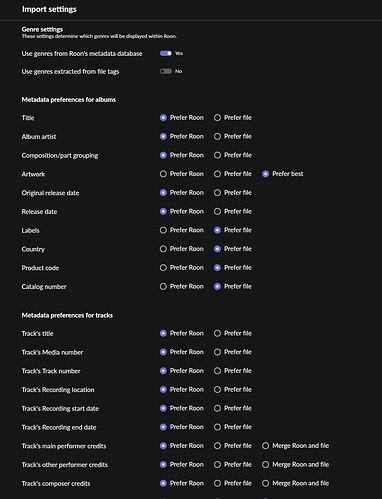 I recently update meta data using Beets to identify specific album version (Originals, reissues, remastered, etc.). In doing so it re numbered multi-disc sets in the format:
Disc Number - Track number
Where Track Number is 1 to XX for the entire track count. So for the first track on the second or third disc it won’t we 01 it will be the next number in total.

Now all my multi disc sets in Roon show up as unidentified. Is there a way to match up all albums. One at a time using album edit options will take forever. I used to only have a handful of unidentified albums, now I have hundreds. 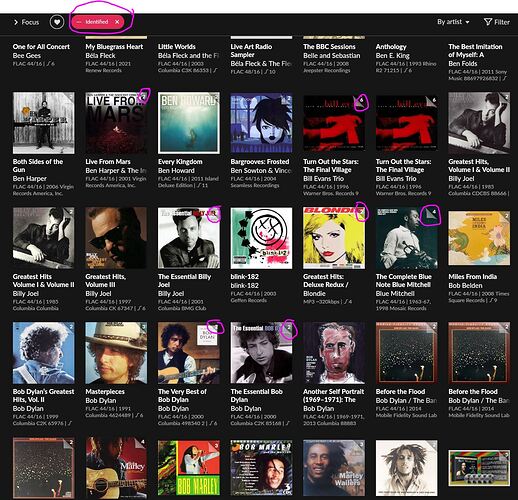 As a test, try putting each disc in a separate directory and then all of those disk directories under a directory titled by the album name.

All my multidisc albums are still fine. So I don’t see this as a generic problem.

In the Album browser, you should be able to select multiple box set albums, then choose “Edit” from the “3 dots” menu that appears at the top of the screen.

That gets you into the Album Editor. Choose the “Re-identify albums” button and Roon should work its way through the batch of box sets, re-identifying each box set in turn.

I would try it with a few box sets first, to see how it goes…

The metadata sources used by Roon will almost certainly have the Disc # somewhere and then 1… xx for EACH disc . Hence making a 3 CD set 1… 25 etc will mean Roon cannot match the Album. You should however be able to match manually by ignoring these .

These days a lot of digital downloads as opposed to multi CD sets have continuous numbering but older box sets not. Often the Disc # tag is missing even !!

The 1…25 et route is not really necessary as Roon will play a 3 disc set starting at Disc1 and run through all tracks.

My technique is a

DO NOT add extra characters after the CD1 eg “CD1 - My First Album” as Roon will assume this is a separate album and NOT a multidisc set and try and ID it alone .

Do this with a 100 CD box Set and Roon will import 100 Individual discs (this can be helpful if the box is indeed a collection of previous releases) which then need to be Merged to re-establish the box.

Guys - I don’t think it’s necessary for @RPlace to rearrange all his tracks into new folders. What’s happened is that after he applied metadata edits to his tracks, the albums became unidentified. The first thing to try is to get Roon to re-identify the albums, and this should be possible on multiple albums at once, rather than one-by-one…

The first thing to try is to get Roon to re-identify the albums, and this should be possible on multiple albums at once, rather than one-by-one…

I can make Roon recognize them by selecting the proper album after clicking “edit”. How would I do this in mass rather than one at a time?

I see that you can select multiple from Focus and use the “…” to edit. From there choose to re-identify. This does not work. 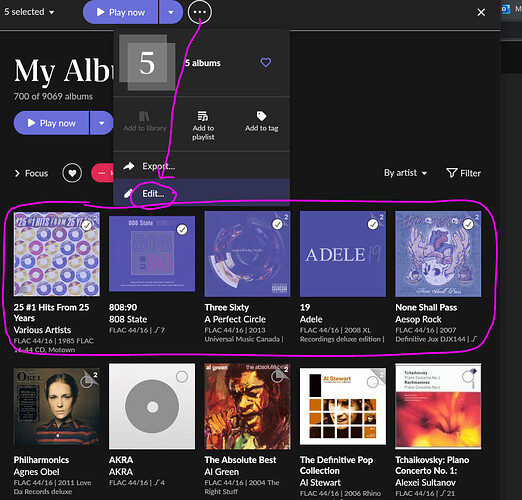 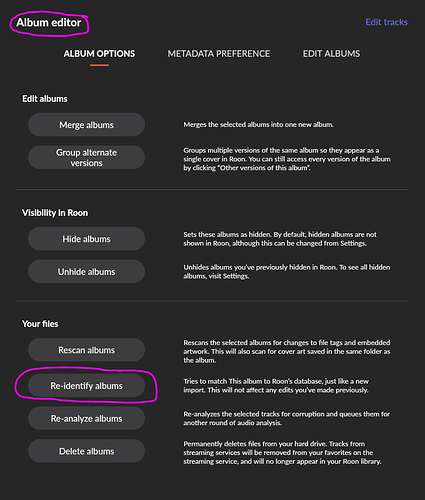 However if I do them one at a time and select “Identify Album” then manually find the correct one it works…but that is painfully slow. 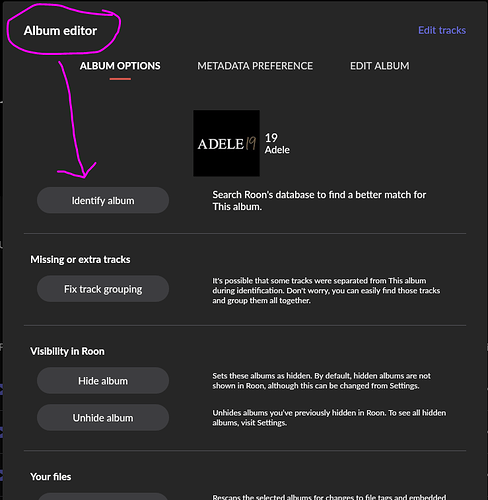 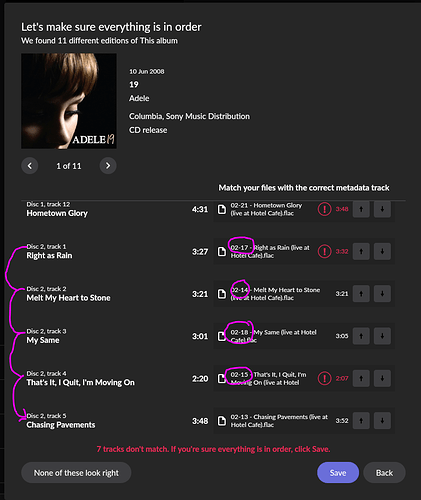 Ah, OK, I thought it was worth a try to select multiple albums and try the re-identify function.

I notice that for Adele’s 19 album, Roon is telling you that there are 11 versions to choose from. In these cases, you will definitely need to check which version you want manually.

And I’ve looked again at your first post, at the screenshots of the Blue Mitchell box set.

It occurs to me that you’ve made an error in the track numbering. When you move to a new disc, you should restart the track numbering from 1 - your screenshot shows all tracks in a single ascending list. This is probably what is confusing Roon.

It occurs to me that you’ve made an error in the track numbering. When you move to a new disc, you should restart the track numbering from 1 - your screenshot shows all tracks in a single ascending list. This is probably what is confusing Roon.

Oh, 100% for sure that is the issue. I purposely told Beets (my tagging, renaming, fixing software) to number them that way. My thinking was that if I ever leave Roon and go to some other playback software I’d like to have them numbered 1 to X because so many players do a bad job with multi-disc sets…especially if you collections is a bit of a mess.

This was totally how I wanted it to be as I “cleaned up” my collection. I never though that Roon would have an issue because it is so good at untangling most messes. However, I’ve gone from having about 50 albums unidentified to 700. So a real step backwards and not practical to fix those 700 one at a time.

Perhaps modify your import settings to prefer Roon over prefer File for the track numbers? See whether Roon can make more sense of the albums that way…

Perhaps modify your import settings to prefer Roon over prefer File for the track numbers?

Like this?
I don’t think I’ve changed any of the defaults since I installed Roon. This is how it currently is and has always been.

Appreciate all the suggestions so far. Thanks you. 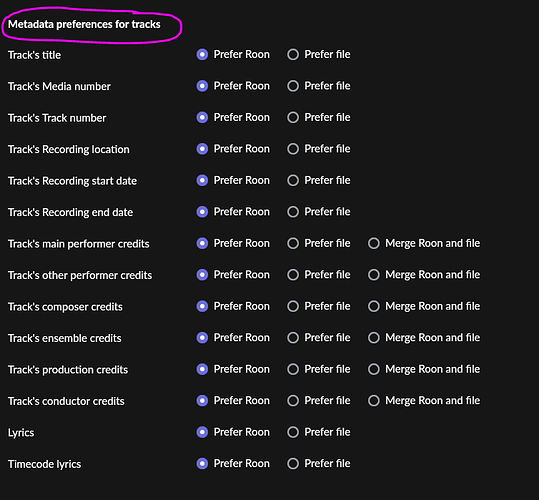 OK - strange that Roon does seem to be responding to the track number metadata, even though you’ve got “Prefer Roon” selected. Personally, I’d try flipping the settings and see what happens, and then flip them back; but I quite understand you might not want to try this.

@support - any thoughts on why “Prefer Roon” for track numbers doesn’t seem to be working?

Unfortunately it specifically says it is expecting each disk to be numbered starting at 1.

Unfortunately it specifically says it is expecting each disk to be numbered starting at 1.

That seems to ring a bell. I remember about 2 years ago “fixing” a bunch by manually making directories like CD1, CD2 or Disc 1 and Disc 2 and putting the files in them. The Miles Davis example on your link jogged my memory. I’m thinking I have a memory like Homer Simpson. Can’t learn something new as it pushed something else out.

Homer:
But every time I learn something new, it pushes out something old. Remember that time I took a home wine-making course and forgot how to drive?

Marge:
That’s because you were drunk.

Personally, I’d try flipping the settings and see what happens

I figured what the heck and was trying that when you were replying…no luck. These are the two I changed and tried 30-some obvious albums. None were identified. I’m thinking no option but to renumber like link from @tripleCrotchet 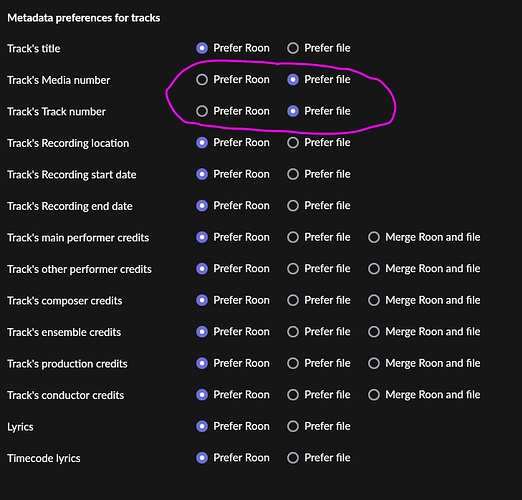 The Homer in me couldn’t follow Beets when I tried it so if re-numbering that way isn’t obvious I have used mp3tag to batch disk number / track number large numbers of files.

The Homer in me couldn’t follow Beets when I tried

It is crazy complex, but I’m a glutton for punishment. I like knowing the different versions of different albums I have and Beets got me there, but its not been an easy trip.

I was never happy that Roon could not easily tell me MoFi vs Remastered vs original or a Blue Note RVG over a different version. Even when the RVG had alternate tracks. Roon got the two identified with correct tracks and as different albums, but I could never figure out the distinct difference.