Anyone purchase Interstellar soundtrack from Qobuz (Hi Res) and was given the wrong version (CD Res)?

I just purchased and downloaded the soundtrack to Interstellar (Deluxe Edition) from Qobuz. It shows available in standard CD resolution, 44.1/16, and “High Res”, 44.1/24. Of course the higher res version costs more (I was charged the High Res price). However, the version that downloaded was the CD version (I was charged for the High Res version). Also, the PDF booklet doesn’t work on the downloaded copy.

When I check the High Res streaming version, it shows correctly as 44.1/24 and the PDF booklet works fine.

Anyone else have this issue?

I sent an email to Qobuz support. Hopefully it will get corrected soon.

Maybe you just downloaded the wrong version? Go to your purchases link and see if the high res. version is there for you to download: https://www.qobuz.com/profile/downloads

I checked as you suggested and it does say I purchased the Hi Res version (I was charged for the High Res version as well). 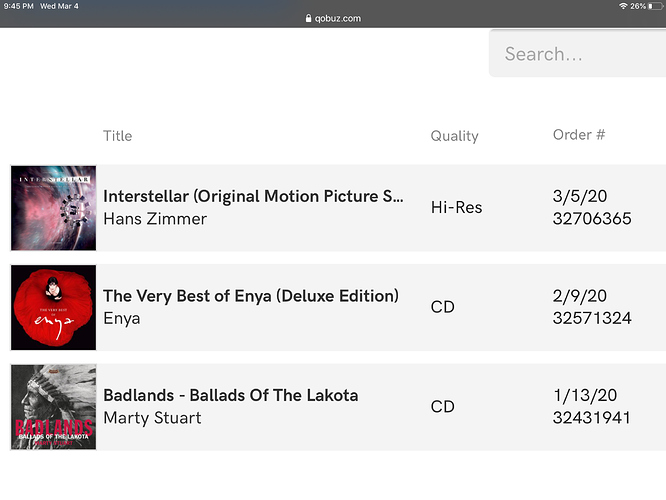 This is what I get when downloaded 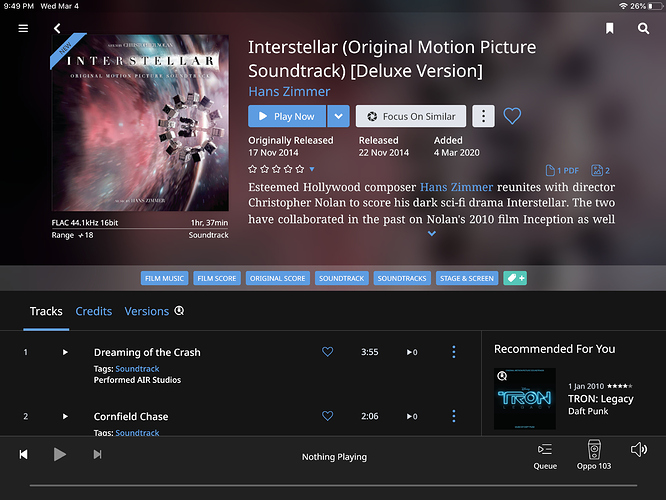 If I choose the version available for streaming, this is what Roon reports 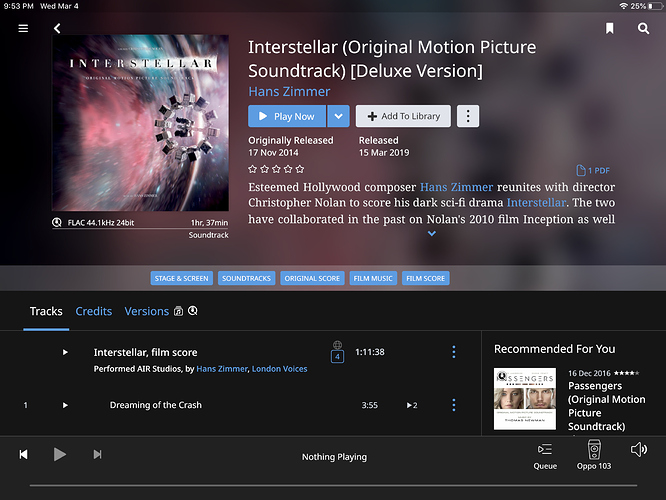 So it appears Roon is reporting correctly?

Did you select the high res. to download? When you click on the Download button, you should see a pulldown menu like this to choose which version to download, (this is not this album, just an example of something similar to what you should see although yours will only show the 24bit 44.1, which is high res.): 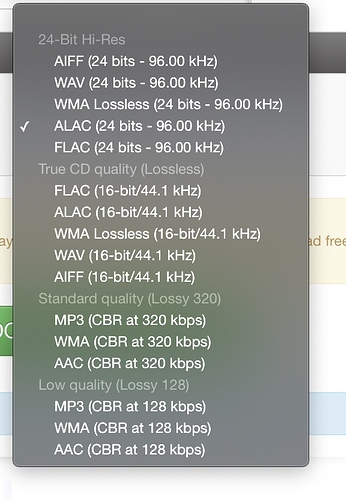 Yes, I did select the 24 bit Hi Res FLAC version.

I checked the downloaded file info on my computer where the file is saved, and this is what it shows. Note it says 44.1/16. 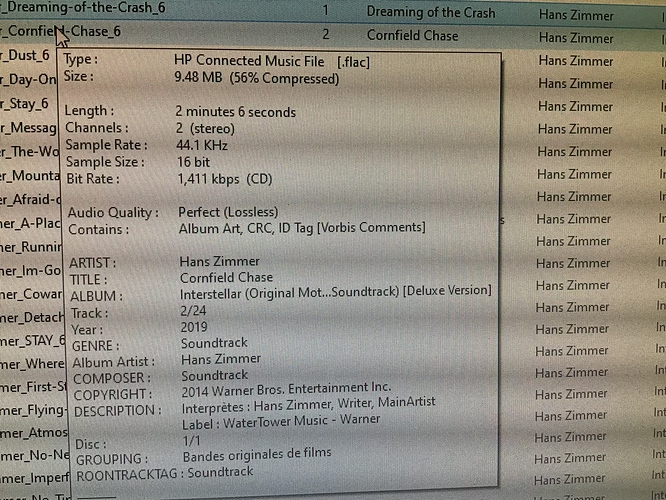 My guess is Qobuz has the Hi Res purchase option linked to the wrong file.

That’s certainly odd. Let us know what Qobuz support says. In my experience, they have bad customer service so it may be YMMV unfortunately.

I appreciate your efforts to help.

I hope if they can’t give me the 24 bit version I paid for they will at least refund the difference.

This is the first Hi Res album I’ve purchased from Qobuz. The other two albums I purchased (with no problem) were just the standard CD resolution files. I wonder if I’ll have the same problem with future Hi Res purchases?

So if I bring up the Qobuz app on my PC (Windows 10) and go to “Purchases”, it shows the three albums I’ve purchased including the “Hi Res” version of Interstellar. 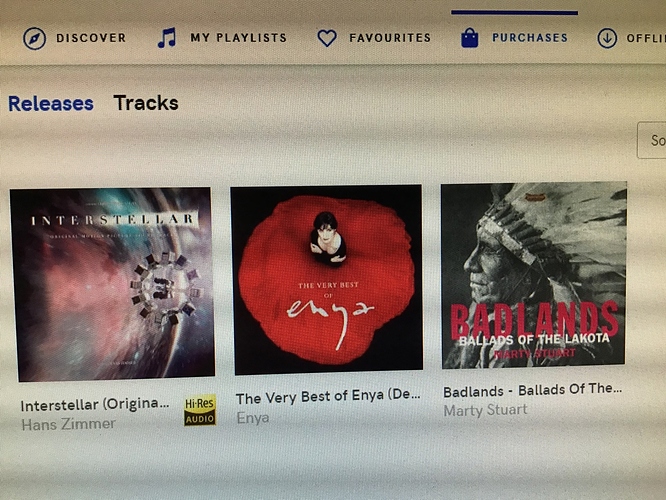 If I play Interstellar from here (on my PC, not Roon) this is what it shows at the bottom of the screen; 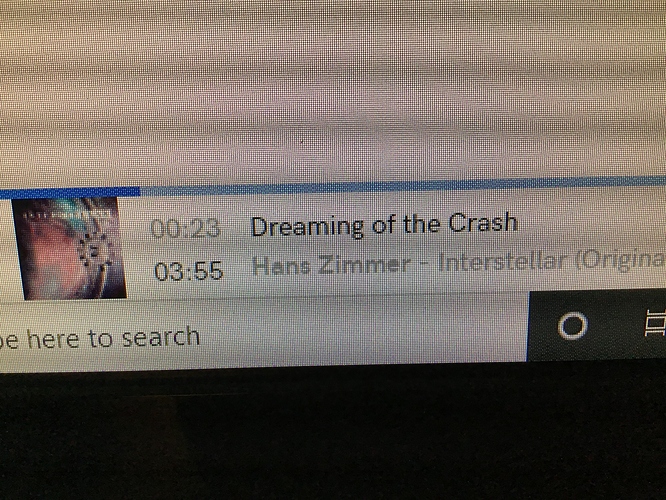 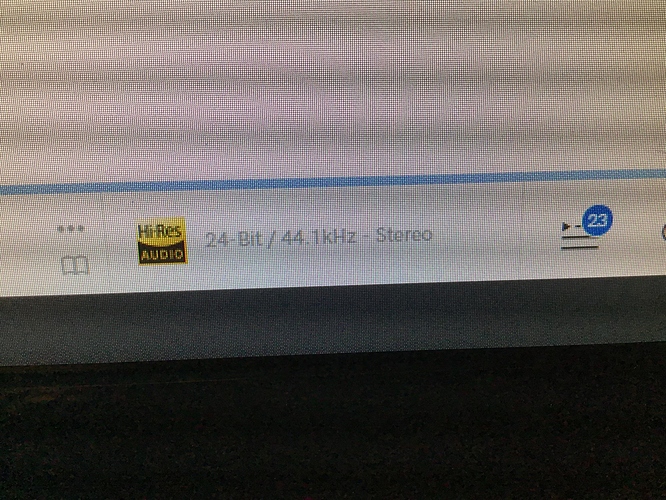 Out of curiosity, I went to the album download page again as seen here 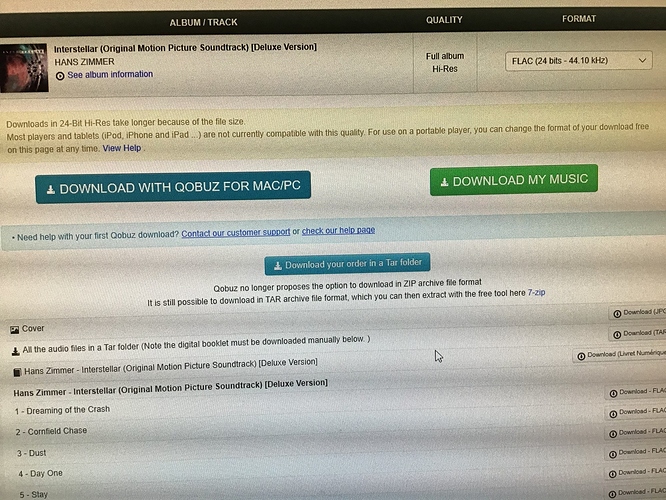 Instead of using the “Download With Qobuz For Mac/PC” option I used before, I tried the “Download My Music” option, which downloads in a “…TAR archive file format…” (I have no idea what that is which is why I avoided it before).

Fortunately, it was easy to find and unzip the file. I checked the format of this new download and it reports 24 bits as it should! I deleted the copy I had in Roon and moved this new copy into the Roon watched folder. Now Roon shows it as 24 bits and the PDF file works as well! 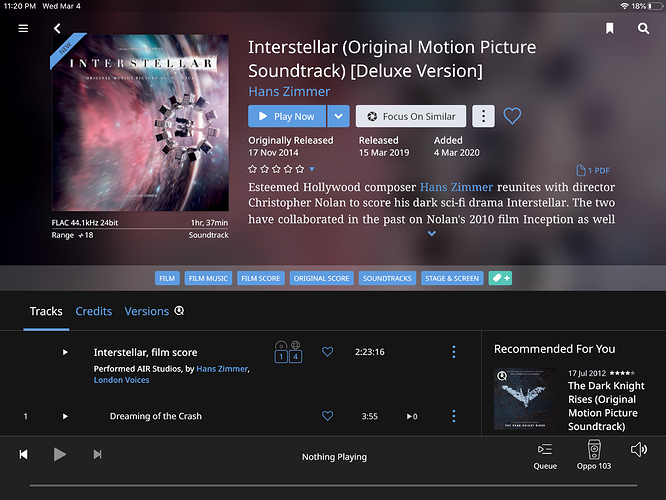 So something is obviously wonky with downloading albums using Mac/PC app method.

So something is obviously wonky with downloading albums using Mac/PC app method.

As a long time Qobuz-User… The blue PC download button comes from the past when there was still a Java downloader. This has not been supported for years and now you’ve linked it to the desktop application. Which doesn’t really work either. But the blue button survived to this day

Always make the download via TAR file in the future.

Yep, now that I know how it works, I’ll be using the TAR option from now on.

Just chipping in here - I usually use the Qobuz desktop application to download purchases, and it has always downloaded the hi-res versions (if that is what I have purchased) successfully…

Just a thought, you can set resolution streaming limits in the desktop app - are these carrying through to your downloads as well?

I wondered about that, so I made sure streaming and downloading was set to the highest resolution. Perhaps it’s just an issue with that particular title?

I hope that is what it was. Wonder what Qobuz support will say…

Wonder what Qobuz support will say

From my experience, nothing that’s of any use.

I must be misunderstanding.

Qobuz told you to download from the Qobuz site using the Chrome browser rather than Qobuz’s own app?