I see your point but all of the other apps have done this as well as spotify (at least for me) for a while.

Tidal has daily discovery mixes that i have actually really liked, good selections of album picks and has daily mixes.

Apples for you station seems pretty bang on to me and their weekly for you playlists actually work (not as good as Tidal, again for me).

Qobuz has curated album picks which i actually find incredible they just fail miserably in providing a good app and have broken integration with roon.

So to me, yes every other service is on par algorithmically and has a better interface for purely discovering and listening to music.

Obviously if you look at windows, Apple falls flat on its face and seemingly does so on Mac too.

Apples for you station seems pretty bang on to me and their weekly for you playlists actually work (not as good as Tidal, again for me).

In personal curation, Qobuz is ahead. Many learn from Spotify when it comes to automated recommendations. Tidal is number 2 for me, Deezer follows in third place.

Apple probably only gets it right with very few customers. Those who already have a very long and rich purchase history provide more usable data. That used to be 800,000,000 customers, where did 95% of them go?

MusicMatch–>MOG–>Beats–>Apple were way ahead in time and technology and the golden streaming apple was within reach. What did Apple make of it? Failed, rebuilt again and again, and failed to deliver on promises.

Tidal got better after I gave you my Spotify favorites via TuneMyMusic. Apple didn’t do it even with that. Deezer was more adaptive that way too.

Thats probably because on Apple Music you have to “heart” tracks and albums to influence the algorithm.

Or at least that was my mistake when first using it. After i hearted all my favourite albums and tracks it works really well

Just to illustrate why I think Spotify is actually pretty terrible at least for me, here is me scrolling in Spotify: 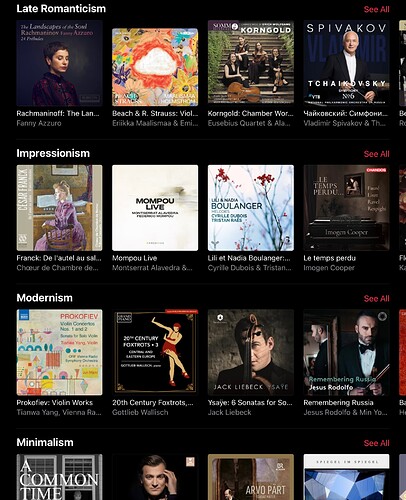 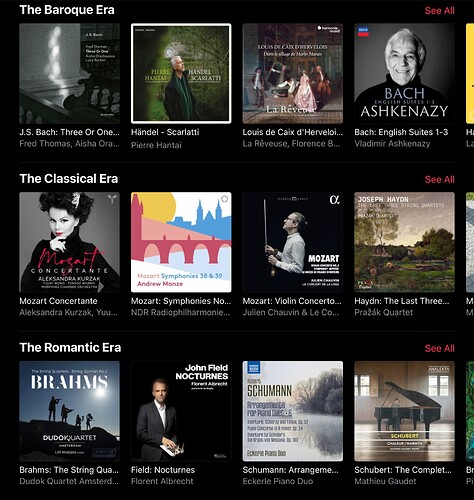 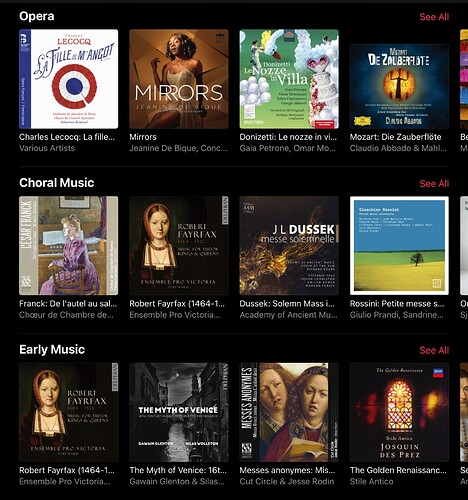 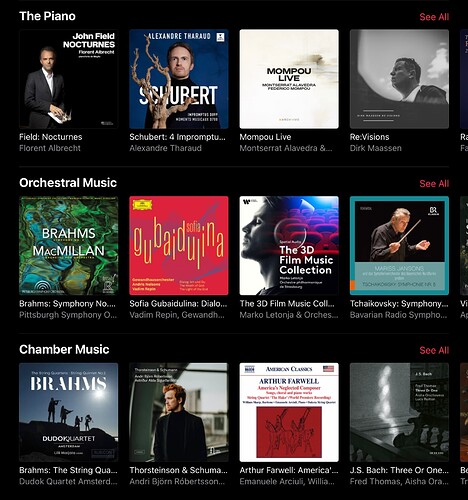 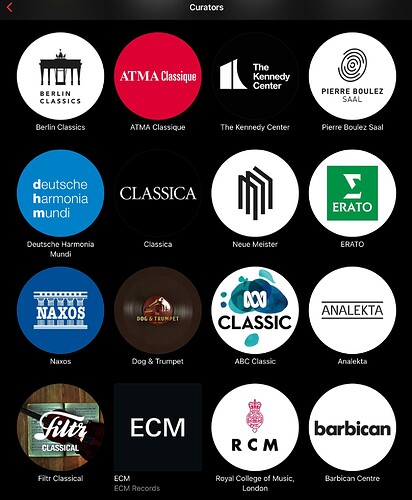 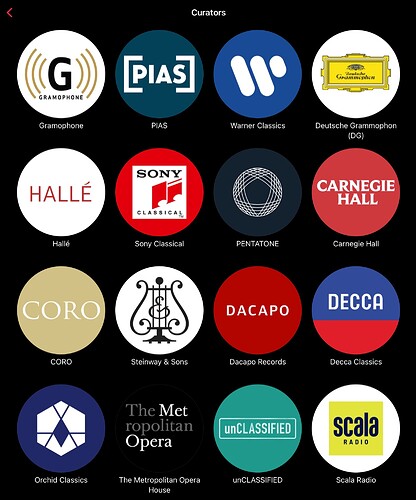 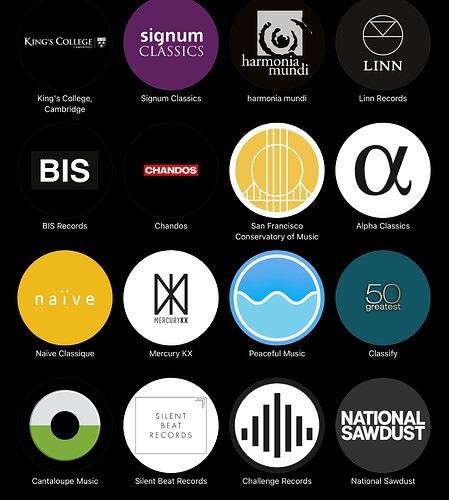 My feelings exactly. Not to mention that only Apple Music allows you to tag your albums (via the Mac app).

Thats just for your ripped / purchased music? Or can you now do that for apple music albums?

For all titles on Apple Music. Need to bring up info and change genre to anything you want. Then you’ll find all your tagged albums under Genres.
Have a look at the two screenshots. The tag ‘Baroque Vocal’ is mine. 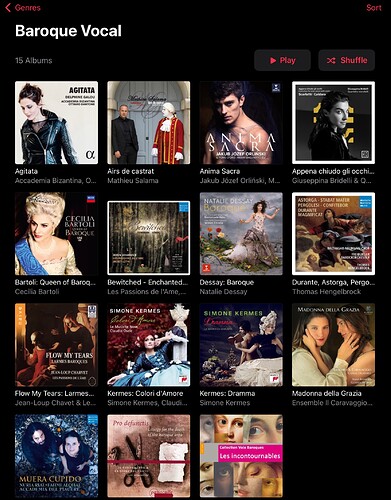 Holy moly, that is cool. One of my biggest irritations in streaming is the lack of sub genre level of detail.

So I only tried it out a little bit when Hifi was first announced to see if I would like Spotify. I used Soundliz to sync my current Qobuz favorites and then it was still able to pull in all my Tidal favorites even though I don’t have an active account. From there I was using the daily playlist for working out and thought they did a pretty good job. Over time there was some repeats of same songs and had to unmarked them. After workout I’d go back to some great finds and try to find them on Qobuz and a lot of times the album was missing.

So I can’t say I’ve used it enough to see how the discovery features work since just using daily playlists don’t help build it. I did really like the expanded library over Qobuz. The interface is not a pretty as Apple Music but easier to use. Spotify Connect worked great with Naim HE streamer. Volume on iPhone and iPad controlled the streamer and hand off between devices pretty seamless. There are some advanced search features where can search for any of these or in combination; years, genre, label. Something roon can’t do from streaming service until you already favorited it.

So all in all I though Spotify competed well with the roon interface and worked seamless with Naim HE. Don’t really care won’t have hires over cd quality since having larger library makes up for it and cd quality sounds excellent on the streamer. Now after expanded use, if I don’t like it and I’ll just end up back with Qobuz/roon.

Interesting to hear, the massive library is fantastic.

Maybe their algorithm just hates me

I will say this. I’ve been an Apple fan for a long time and still buy iPhones and iMacs. I used to their software from Aperture to iTunes. They closed down Aperture and now use Lightroom. iTunes is now just Music, haven’t touch since streaming and using roon. I do think Apple Music interface is pretty slick and fits well with iPhone and iPad. Probably if I used it more, I would be quicker at figuring things out. I do like how it has direct link to the album label and then can quickly see other albums on same label.

If Apple came out with a connect feature, I probably end up using them over Spotify. It also upsetting that lossless music isn’t really lossless over Airplay 2 but Apple doesn’t if tell you that. They just sort of leave wireless streaming out of their text on how to get true lossless music. I’m sure if they fix this I’ll give Apple another try.

I don’t think Spotify is leading the way in viewing and selecting the genre of “classical”. Hopes were better fulfilled with other providers (Qobuz, Idagio & Co.).

But there are also satisfied classical customers at Apple, Tidal, Deezer, Amazon, Google or Spotify, although it is clear that only Tidal and Deezer played in the Hi-Res league.

When the catalogs and technology are converted to Hi-Res without compromise, other providers may claim the same. Some are nimble with words, but don’t follow up with action for months or years.

In the presentation, Roon sets the standards and integrates two Hi-Res music services at once. The friend of classical music does not miss out either and can select many subgenres or styles in “Classical”. I assume the good handling is known.

However, you can also get suggestions for searching and filtering very well with Spotify. I present this better in a separate thread using the example of “Classical”, which also always plays a prominent role here.

I’ll start with the largest provider Spotify. The expectations are low, the possibilities probably greater than many assume

I suspect they will ultimately, but tech takes time.

I use Tidal Connect to my CXN works great

How can it not work with Roon? Oh, sh*t, just realised this probably means you have to play it from the Apple programme unless they are selling albums which if they can be downloaded should mean they can be played via Roon.

If Apple Music can only be used with their programme then I won’t use it. I’ll stick with Qobuz. Tidal is too expensive. I can afford it and I subbed but after 3 months of paying £20 a month, I realized I wasn’t using it enough plus their customer service is appalling. One cannot, as far as I can ascertain buy albums in hi res or MQA.

Tidal is too expensive. I can afford it and I subbed but after 3 months of paying £20 a month, I realized I wasn’t using it enough plus their customer service is appalling. One cannot, as far as I can ascertain buy albums in hi res or MQA.

On the Download Homepage, you can browse available featured content or, you can use the search bar in the top right corner to find your favorite album. Next, you will select the preferred audio qua...

If Tidal is too expensive then you should see how much CD’s cost back in the day… Tidal’s costs what it costs, the issue is, can we afford it? Artists, writers, players do not get paid enough in general and Music, despite the illusion, is not free. In reality streaming is too cheap today…

In reality streaming is too cheap today

Or the money isn’t reaching the right people. Transparency is also an issue here.

Kind of interesting that people now seem to care for how artists are paid when we are charged on a per use bases. Cannot recall such frequent discussions back in the CD or vinyl times. An amount of empathy I don’t really trust.