Core is connected by ethernet to the TP-Link switch, which then connects to the FIOS router

When using ARC while in my car the app played one full track, and then stopped playing. A red banner popped up at the bottom of the screen stating “Poor connection.”

Thank you for the report. To confirm, port forwarding has been successfully configured in the Roon ARC tab in Roon → Settings?

If port forwarding hasn’t been enabled or has an issue, then the app may have been playing cached data from when it was on a Wi-Fi connection. Otherwise, there’s a chance that you’ve encountered a known issue for which we have already have fix in the pipeline. As a workaround, you can close/reopen the Roon ARC app and it should resume connection. Please let me know if this resolves the issue temporarily.

I’ll be watching for your response.

Thanks Connor. I believe it is configured correctly. I’ve attached a screenshot of the ARC settings. 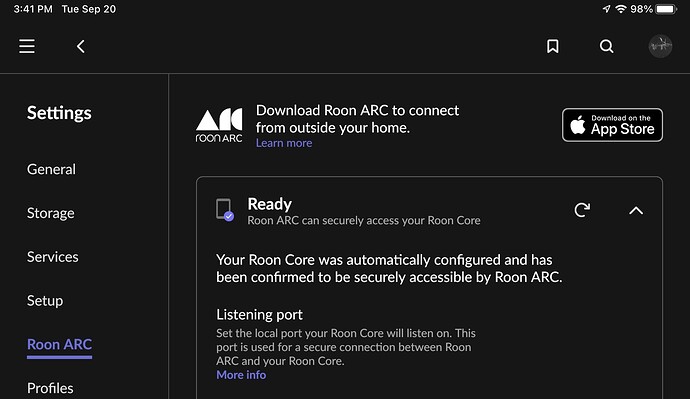 I’m having the same issue, except that I am using a Galaxy S9, running Android 10. I see the same message as the screenshot above - that my Roon core was automatically configured. The app worked for 2 songs, then I got the red Poor Connection banner, then a message that it could not connect to my Core. I did not change any port forwarding configurations in my router. My Core is a Nuclues+. Closing/restarting the app did not help.

Connor, here’s an update about my second session with ARC. I went for a walk away from home, and had no issues whatsoever. I played the same playlist from “Your Daily Mixes” that ARC stopped playing while in my car. Both sessions were over the Verizon 5G network, but there were some differences between the two sessions which I’ll list below. I’m not sure whether they’re related or not. My hunch is maybe the first item had an affect.

Here’s another update Connor. I just took a drive to a park, and ARC had no problem either while driving over, or walking around the park. I suspect my problem was probably related to installing the app prior to the core receiving the update. Someone posted about the ARC app, and I installed it not knowing there was a specific order to the upgrades.

Two hours of playing without interruption and bang. Poor connection.

I need to remotely restart the server in order to get it to work again.

Strange thing, it was fine week before official 2.0 release.

I do have this problem a lot too, specially when I’m searching for something, it stops and then I get the poor connection message and when I hit retry it continues. Signal is solid with 5h full bars and I’m running roon core on a synology ds1920+, iPhone XS Max running roon arc app.

There’s a known issue with the Poor Connection notification appearing despite the phone having a positive connection via mobile.

The erroneous notification message will appear more frequently when in the Tracks Browser while loading a screen with a large volume of tracks. It can also appear with playback in certain conditions, as some of you have reported. We have a ticket in and anticipate this should be cleared up with the next cycled release.

Thanks for your reports and for your patience in the meantime.

Roon ARC is a good app but needs some work to do to fix the connection problem which still remains. After multiple times of refreshing ARC server I switched back to my old friend Onkyo HF player.

Having the same issue on a Fold 4. Only one album works.
I am finding arc to be unusable in its current state.

We’ve had several tickets merged in the last two releases that should have improved performance and banished most of the erroneous “Poor Connection” errors.

Since this issue originated with the initial launch, we’ll mark as resolved for now, but if anyone continues to experience occasional poor connection messages while loading larger playlists (100+ high-quality tracks), please know there’s still an extant ticket for that precise symptom.