Not sure if there’s a post about this already, apologies if so.

Four sample track segments played on four unknown digital sources, which have then been captured, to see what people’s findings are when playing them back in their home hifi. Do they all sound the same or different? What are the differences? The full details in the link above.

I’ve downloaded the files, and submitted my results. Actually the bit that took me the longest was regrouping everything into a single album in Roon so that it’s easy to compare at will (Roon initially thinks of them as alternative ‘versions’ of an album). I merged the ‘albums’ and renumbered the tracks sequentially 1-16 as per the screen shot.

I’m not going to say anything about my findings - and I’d suggest anyone else that tries does the same - just so as not to influence / skew results, but I will say I only used a couple of tracks as they’re not all my cup of tea. At the end of the day all I wanted to see was whether I could hear a difference between the digital sources used.

Can’t wait to see what the findings are… 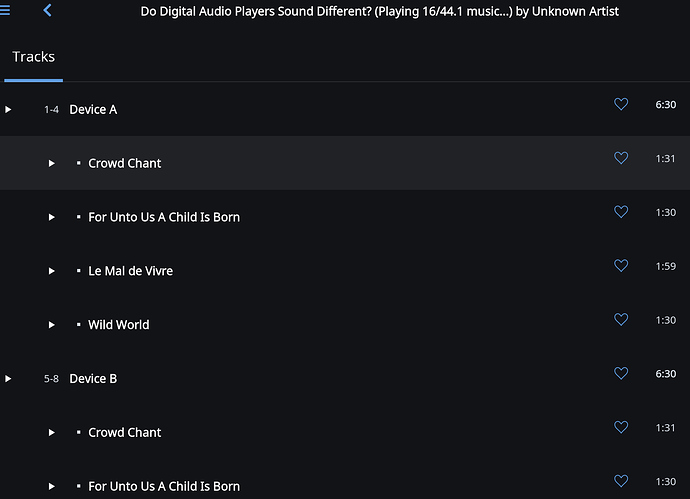 This is a great little exercise…

I imported and combined them into one album, then created a playlist like so - 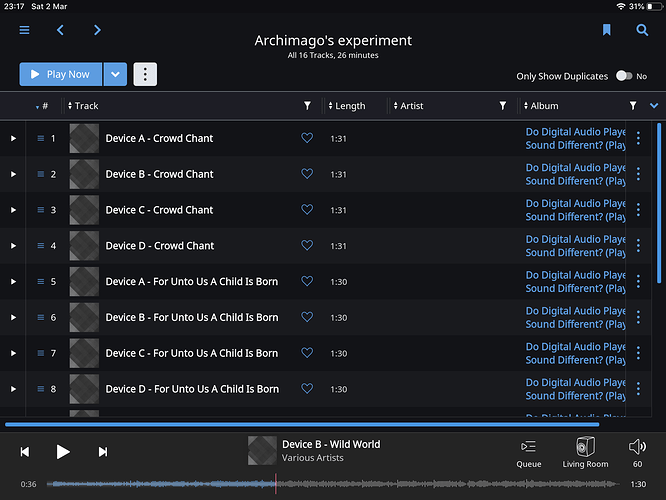 I’ve gone through them all, and I ‘think’ I have a preference!

Once I think I prefer one device, I try chopping and changing little sections, then it all gets thrown out of the window and I think I can hear a different front-runner!!

However… once I settle in again, I think I still go back to the same preference I originally had!

I need to listen quite a bit more yet until I come to a firm decision!

Agree! I’ve downloaded it, not yet listened seriously, but I will!

On the other hand, people who dislike the result, whatever it is, will quarrel with his methodology. Fake news!

On the other hand, people who dislike the result, whatever it is, will quarrel with his methodology. Fake news!

I did a similar test last year to determine if there was any difference with using different transport methods, I tested using wired LAN, wireless LAN and local usb playback off a usb stick. I recorded the same track via each method on a digital recorder using the headphone out of my Uniti Atom. For the wifi and usb I also removed the LAN cable. Then edited them to be the same length and loaded them in to audacity and could seemlessly toggle between each version and compare the waveforms of each.