Yes, if you are the seller.

I don’t think so. I have in the past bought a few of them and it only confirmed my belief that mastering is the key issue with music - format, rate etc. take second place to good mastering.

Even if what is said about them is to be believed it makes no sense if one is ripping them, accurate rip will insure they are …accurately ripped.

Not for the “SHM” reason. They often have the best masterings available and that is a reason to buy an SHM CD.

My experience is that they can sound different but I put that down to them being mastered for the Japanese market not the materials. Its probably my imagination but to my old ears there is often a treble lift so I do seek them out. Helps with transients on certain types of music I find.

If you are going to rip them to play (in Roon), the material does not matter, only the mastering does.

If you are going to play the CD in a CD player, then it depends on whether you think your CD player gives different SQ for different materials, e.g. CD-R.

That has not been my experience…not at all.

In fact, they do many “flat transfer” masterings that are just plain phenomenal. Especially for their SACD releases where they do a flat transfer straight to DSD.

Of the replies so far, the one from…scratch that having just seen the reply from Speed_Racer.

Speed_Racer would you elaborate please? There are a couple I would like, from Japan, but if the rip is no different or the sound from my cd player is no different, I won’t. I thought tripleCrochet’s point tipped me to buying because I find so much music now, even modern issues of of old albums, have too much bass and thus i have to use the DSP in Roon to counteract it.

Speed_Racer and tripleCrochet seem to be saying the same thing that SMH is worth it, but for different reasons.

They often have the best masterings available

if only that were the case

Here is a small list of SACDs from SHM that I have and think have the best mastering available on CD or higher resolutions: 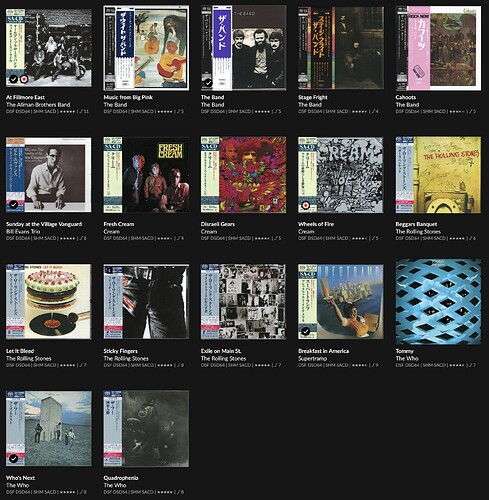 Thx
May be I have been unlucky until now, I’ll look into your suggestions and hope to be surprised

“the enhanced transparency of the SHM-CD results in more clarity, depth and definition of sound, bringing the listener ever closer to the music of the original master”

So your bits will be more transparent, literally.

This is my experience that I’ve got with roughly with my SHM-CD:

Just to be clear. I think the material the CDs are made from makes absolutely no difference at all.

I have just found that on occasion material specifically mastered for the Japanese market has a subtle treble lift and is drier in the base. It is not a hard and fast rule. I am disappointed as much as I am rewarded but the benefits are enough to keep me seeking out Japanese masters. So it is not just SMH-CD I seek out but also XRCD, for example. I also seek out other non-Japanese remasters with a similar mastering profile (to my ears). For example, vintage remasters from Pristine Audio.

I did try roon parametric equalization a while back to be more systematic about it, but gave up. Couldn’t work it out. Maybe I’ll try again.

The mastering is the key issue here. The material the CD is made of makes no difference whatsoever. That’s especially true if you just ‘rip’ the CD for streaming.

There are some lovely sounding SHM-CD & SHM-SACD’s out there. But that’s due, in the vast majority, to good mastering.

So, in summary the whole SHM issue is a marketing ploy IMO.

It’s no coincidence that the vast majority of SHM discs originate from Japan & Hong Kong.

The two-channel market with respect to CD’s & SACD’s is still very buoyant in Asia, and high-end disc spinners are still very much in-vogue there. Hence the supply/availability of things like SHM & Blu-Spec CD’s etc.