Artist page: main, with... and appereance albums: how does it really work?

I don’t really get how albums by a certain artist and related groups are showed in Roon.
Here’s an example to explain what I mean.
This is Robert plant Page as performer

led.JPG1895×626 146 KB
Then you see under “appereances” Page & Plant No quarter album; as you see under, Page &Plant is artist on its own (strangely with only Jimmy Page credited as member) so it should really be showed under With page & plant; i also edited credits of no quarter adding Robert Plant as group member but nothing changes.
No quarter is also under appereances for Jimmy Page. 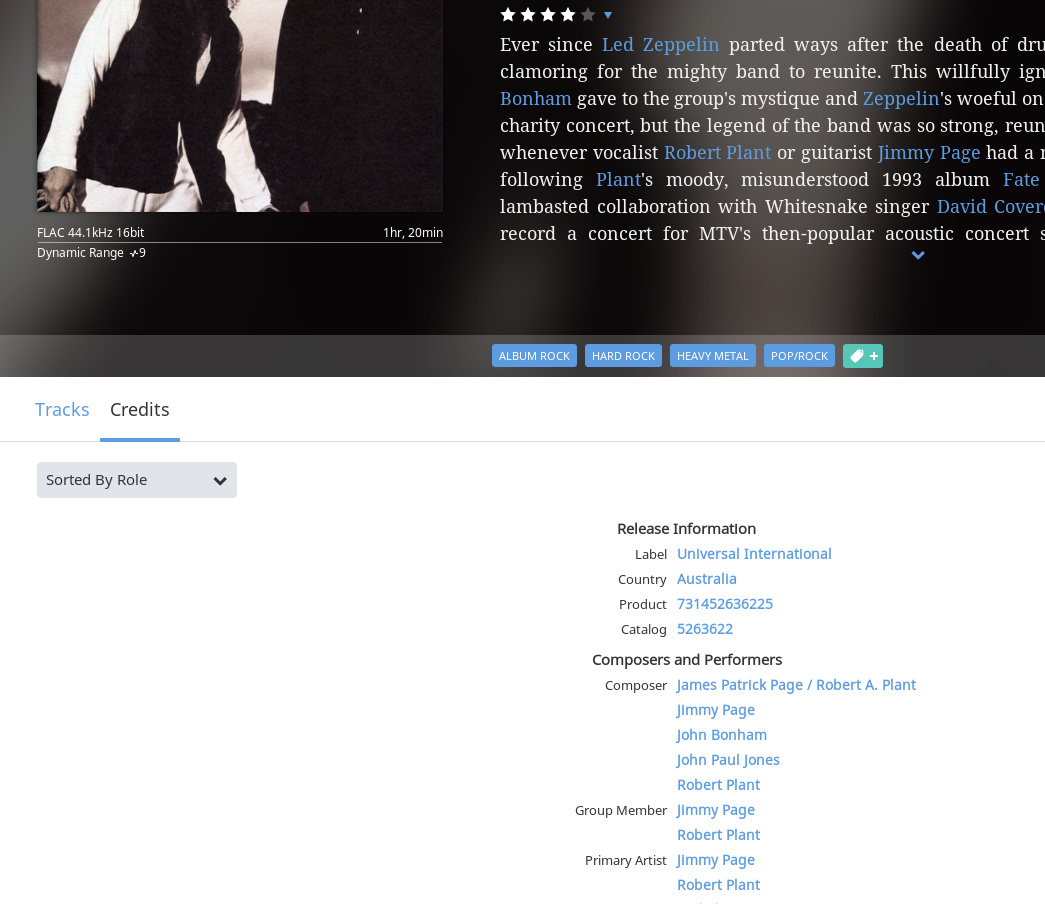 This is only an example but this happens for the majority of artists that have solo and group albums!
Can you please explain how Roon works or how to fix this problem?
Thank you in advance.

When you look at an artist page, what you’re seeing under Main Albums or Singles and EPs are album on which the person is credited as Primary Artist at the album level.

You should be able to see this on the album’s Edit page, on the Edit Album tab: 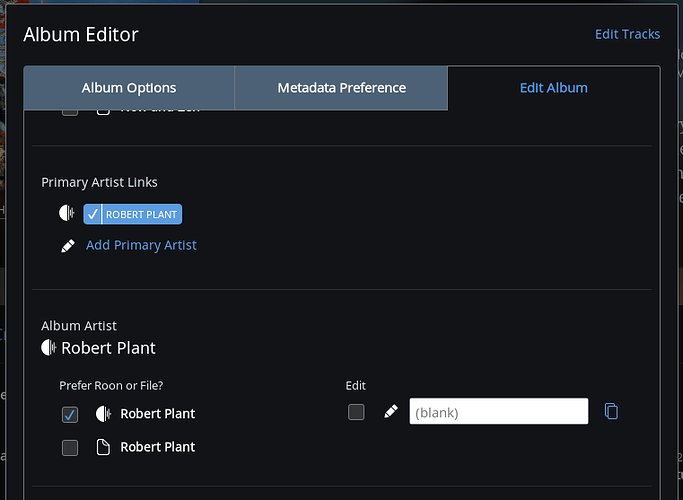 Any other album on which this person has a performance credit (ie not a Composer or Production credit) will show up under Appearances, like the 4 albums in your screenshot.

We also split albums out of the Appearances section if they a certain number of those albums all have the same Primary Artist.The idea here is that Miles Davis might have appeared on 100 albums in your collection, but there’s real context we can highlight by splitting the 22 Coltrane albums out into a “With John Coltrane” section.

For that to work properly, Miles Davis needs to be credited on all 22 Coltrane albums as a performer (meaning he’s credited for playing trumpet).

So, I’m guessing the reason you’re not seeing every Led Zeppelin album on the Robert Plant page is that, sadly, the metadata we have for some of those albums fail to credit him for guitar or whatever.

Thank you Mike for your answer!
Now It’s clear why certain albums appear under Apperances or With… and I can say that I agree with the logic.

What’s strange, but this is really a metadata problem, that I fixed the Robert Plant & Led Zeppelin problem selecting all Led Zeppelin albums and adding Plant (and the other 3 members) as group members. this means for example that for IV and we’re talking of one the most famous album in rock history Plant is credited as a composer but not on vocals or even as a group member! 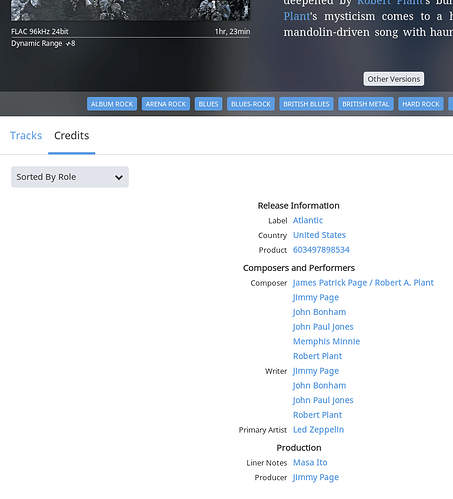 It’s an old post, but that’s the only one i’ve found on the topic.
@mike, i disagree with your explanation.
Here’s my example: 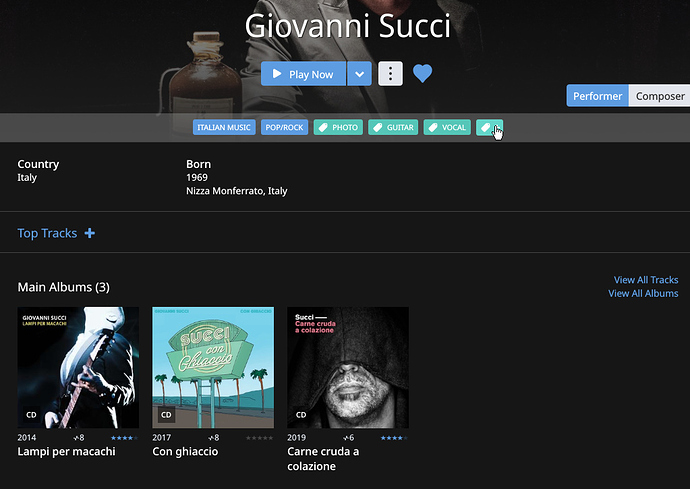 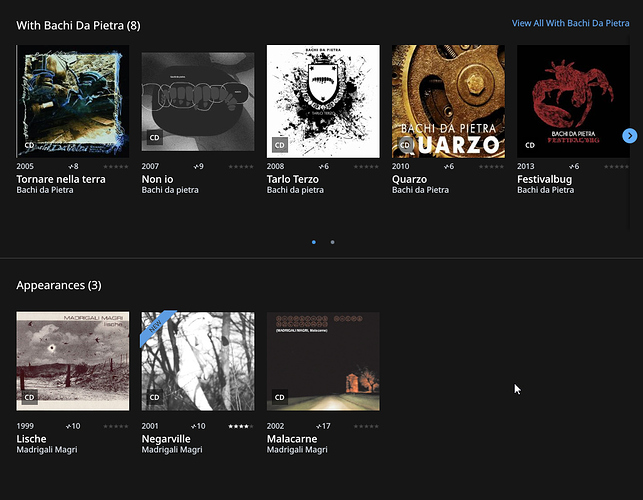 the three main albums have Giovanni Succi as ALBUMARTIST (in file tags).
G. S. is a member of 2 groups: “Bachi da pietra” and “Madrigali Magri”. For their albums, G.S. is credited as primary artist at album level, for example 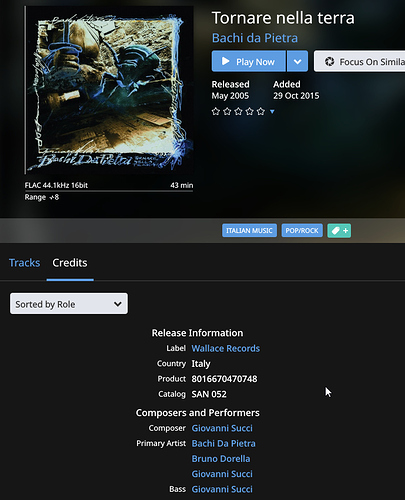 what an album need to be a main album is a “primary artist link” (as you noted).
in any case, in all these albums G.S. is credited (via my file tags) both as primary artist and performer (no screenshots here, believe me).
But as you can see, the appearences with “bachi da pietra” have been split out, while the the appearences with “madrigali magri” have remained generic.

from this a deduce that, when you say “if they a certain number of those albums all have the same Primary Artist”, that “certain” is more than 3.
in my opinion, this is not sufficient. i mean, it’s ok in your miles davis example. here, it’s roon that tries to order the albums according to the “Album Artist”.
But …even 1 album, if associated to a recognized band/group, should be split out. this could happen, for example, when an artist is a member of a group/band. i mean, roon MUST know that R.Palmer is a member of Led Zeppelin, and split out the albums correspondingly.
that’s what I would expect.

accidentally, in my example Roon does not know that G.S. is a member of Bachi and Madrigali: 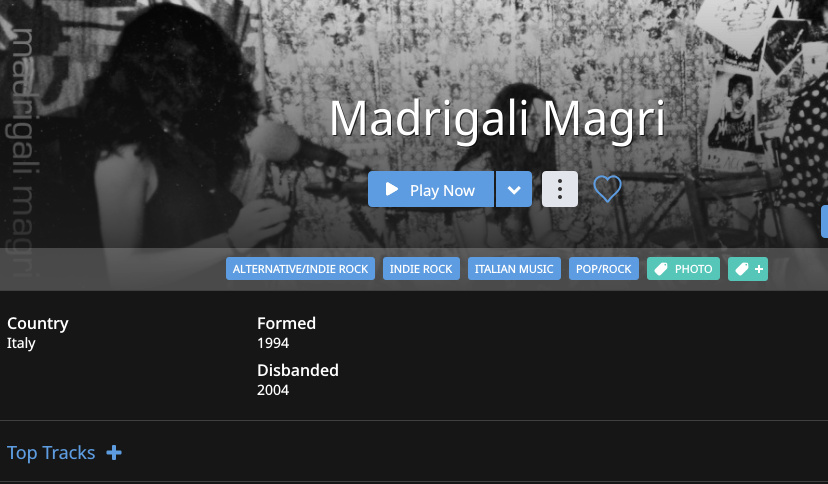 in this case, it would be MORE then logical that we users could edit the group/band artist page.
see this:

Include ability to add band membership for artists Feature Requests

For artists Roon knows it lists bands they’re members of, but the metadata isn’t always complete and for Unknown Artists there’s obviously nothing. Would be great to be able to add to band membership and add same for unknown artists.

let me add a remark:
to me, it’s becoming more and more evident that roon is not going to correct its metadata. and everybody agree in saying that allmusic metadata are very bad.
and that’s something i think i can accept.
but… it’s then necessary that roon software allows the user to edit them. hopefully, in an easy way (via file tags). but also in the roon UI would be ok.