Artist pictures have changed back to default

Some of the artist pictures that I manually changed have been changed back to the default pictures. I’ve seen this behaviour before but it’s been a long time since this happened. I really find this annoying and I truly hope this will not happen again with future updates. If roon would provide with high res images I would not mind that much but unfortunately a lot of the default pictures that roon provides are small low res pictures.

@support any idea why user added pictures get replaced?

Any feedback on this @support?

@support
This keeps happening and I’m getting fed up with this!
Can someone please check on this… this is the 3rd time I brought up this issue but no feedback at all

Why did roon for example think it was OK to change my picture from the Pixies to this one without my consent? 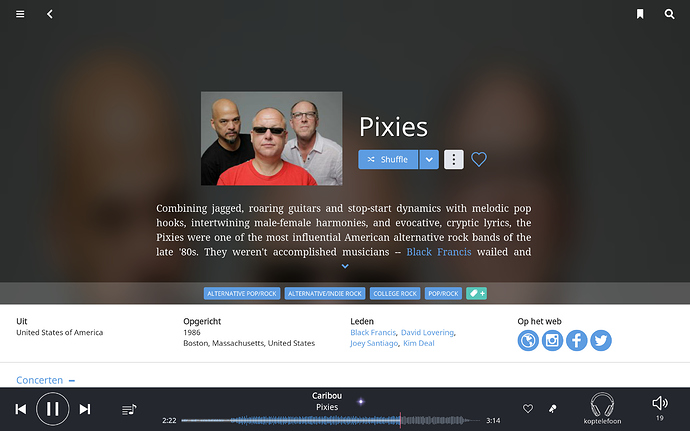 So I’ve again changed an image to one of my liking but it’s really frustrating to see images randomly change in my library.

I simply change it and it saves OK but if roon seemingly randomly decides to change the artists images what’s the point! 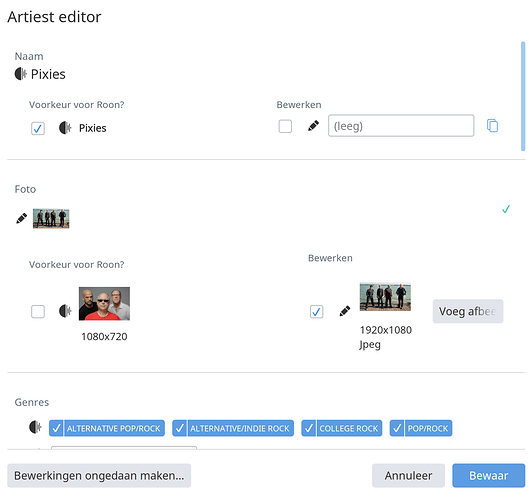 Hey @stevev1 – sorry for the slow response here. I was hoping I might have a short-term solution here, but we’ve looked into this a bit and unfortunately for the moment all I can say is that we’re aware of the issue and why it’s happening, and we’re working on a solution.

Appreciate your patience on this, and apologies we don’t have a more firm time frame for addressing this.

this issue is back with a vengence with the introduction of 1.6
PLEASE fix this. Why does roon keep messing with my artist pics!

Again if roon would use nice high res artist pics I might be less upset but is this really the best roon can do for eg Nick Cave? 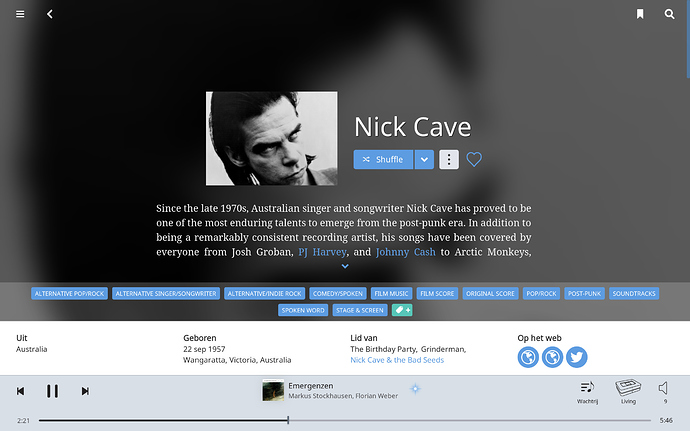 Hey @stevev1 – what you’re seeing isn’t related to 1.6, and my comment above is still a good summary of where we’re at on this issue: we understand why this is happening, and we’re looking into some ways to make occurrences like this less likely in the future.

If it seems like things have gotten worse, it’s probably because we’ve made some significant improvements to our metadata over the last few months. The last changes rolled out almost two months ago now.

To give you a little more detail – the biggest improvements we made are related to artist equivalence, meaning the way that Roon knows that “Miles Davis” is the same person across your file tags, our metadata providers, TIDAL, Qobuz, etc. Bad or missed equivalences are one of the primary sources of bad metadata in Roon, and the changes we made over the last few months fix a huge number of these equivalence issues.

The problem here occurs when our metadata infrastructure previously had an equivalence issue (like failing to consider 2 instances of “Miles Davis” as the same person). If you attached an image to one of them, the improvements I’m describing above can cause the person you edited to simply no longer exist anymore – under the hood, you added an image for “Miles Davis(2)” but once these fixes go live, your albums update and now there’s only 1 Miles Davis, as there should be. He just doesn’t have the image you added

So this is a complex problem, editing of artists in general. Hence why this is not a simple problem to fix – to be clear, Roon will never clobber your edits for a given artist, but it’s possible for the references to the artists to change over time, which can result in edits being orphaned, since the artist now has a new identifier and your edit is no longer tied to it.

I’m a new user. I have used JRiver and will continue to use it for ripping, sorting, and other management tasks. I have found Roon to be better sounding, and use Roon to power a networked Logitech Squeezebox Duet in my main listening room, and also at my desktop computer.

I find the gray boxes all over in Artist mode to be especially confounding. Roon rightfully should be proud of its beautiful interface, and everybody recognizes that. Why do you let the user modify the pictures in the “Album” mode, but make it extremely difficult in “Artist” mode? Not a big issue for me if The gray placeholders were 1% or less, but mine are about 50%.

Why not just let us do it. And by that I mean let the program find artists pictures in a folder that the user provides, similar to the way it works in “Album” mode.

Too much gray = not pretty.

Thanks a lot for explaining the issue in such depth @Mike ! but I think there might still be other things playing 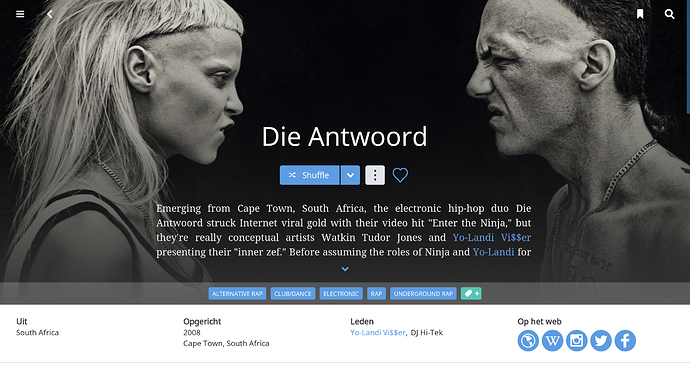 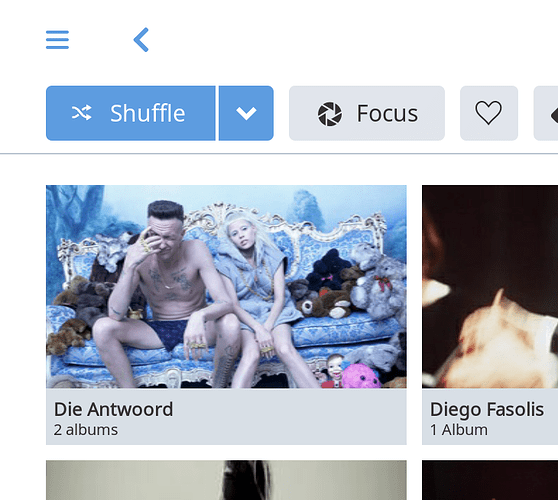 Sorry for replying to an old thread but is this issue resolved? I just noticed today that a few of my manually added artist images were changed by Roon.

I’ve noticed a few Artist picture changes have occurred recently, which is nice, thanks… but also that my painstaking manual edits and additions are simply over written with whatever Roon pushes

Can the Roon image changes only be applied to Roon supplied images?

Mike, this is likely to be happening if you have “Prefer Best” as your Library Import Setting for Artwork. If the new Roon image has a higher resolution than your own image, then it will overwrite your image.

I understand, but that applies only to Album Art… and here we’re talking about Artist Art, where no “Prefer Best” option exists. I know I changed this one for example, and my image has gone. 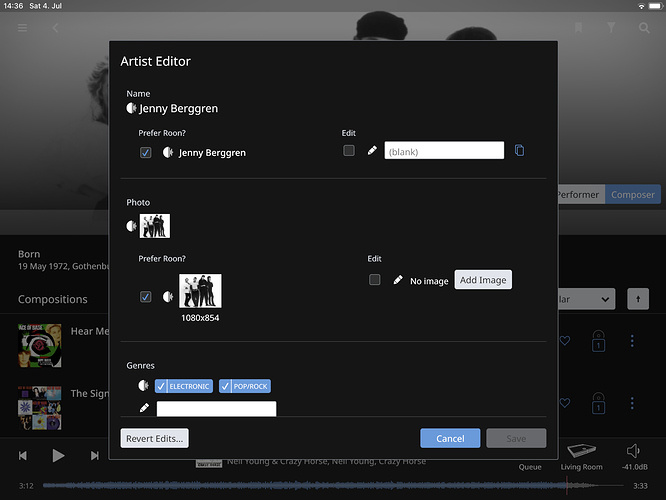 Ah - good point Mike; I missed that. And there I would agree, Roon shouldn’t overwrite your own Artist artwork without at least first asking. This should be raised as a Feature Request (if it hasn’t been already)

I’ve noticed a few Artist picture changes have occurred recently, which is nice, thanks… but also that my painstaking manual edits and additions are simply over written with whatever Roon pushes

I request the “Artist editor” be updated to include “Prefer Best, Roon or File” options as with the Album Editor, and preferably not automatically overwrite any user added picture?

That’s frustrating. Is the picture you assigned still there to re-choose or is it gone completely?