I just replaced a 6i5 nuc running ROCK with a Nucleus, and the overall user experience is noticeably slower, particularly using my iPad Air 2. Artwork frequently takes a few seconds to load. Sometimes I get stuck on a screen like the one below for 10 or 15 seconds. 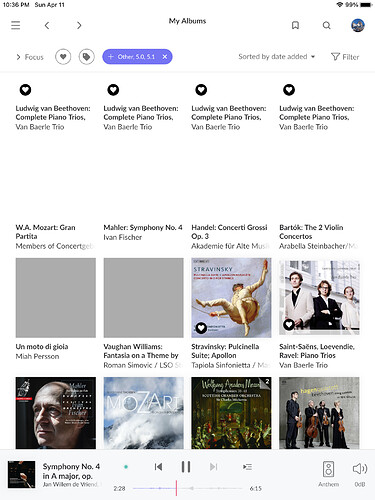 The experience is snappier using my laptop as a remote. Probably a networking issue is responsible, but the only thing that has changed is the addition of the Nucleus.

I have tried clearing the image cache on the iPad and removing and re-installing Roon with no improvement. Perhaps there is an easy fix I’m overlooking. I’d be grateful for any suggestions.

I have also encountered a probably unrelated problem with occasional loud pops when starting playback. I think this is an HDMI issue, but it was never more than a moderate click with my previous server.

First, I’d like to apologize for the delay in our response. We’ve seen an uptick in support requests recently and we’re working hard to catch up.

There have been a number of new releases with various performance improvements since you wrote to us, so I’m checking to see if you’re still experiencing this slowdown with album art.

If you’re still seeing this, can you make a note of the exact local time and date as well as the Roon remote you’re using in case we need to check logs?

As far as the Nucleus being slower than your ROCK, that’s pretty unexpected. The time stamps will be useful for checking into both of issues.

Looking forward to your updates!

Thanks for getting back to me. I believe the cover art problem was network related, since it varied across remote devices. But partly because of a few small issues I encountered, including audible electronic noise, I decided to stick with my old server for now and return the Nucleus. Thanks again.