I have an RME audio device with multiple outputs and I wonder how is it possible to select which output Roon uses to send audio.

There is no mention of this functionality in the manual.

Can you please share a screenshot of your Roon Settings -> Audio tab? You can upload screenshots by using these instructions and it should look something like this: 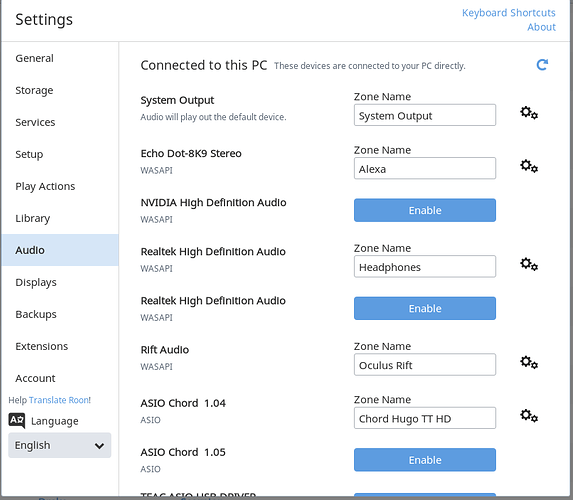 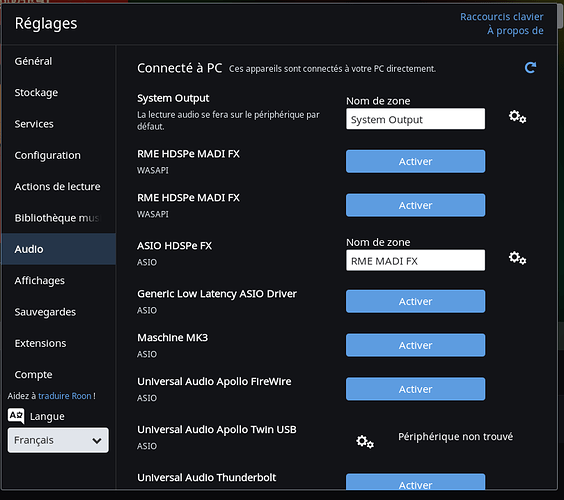 Thank you for sharing that screenshot. I would use the currently selected ASIO driver (ASIO HDSPe FX) and then use Roon’s Procedural EQ to perform the multichannel mix.

You can access the DSP menu by right-clicking on the zone name -> DSP. Then you will want to select Procedural EQ or Add Filter if it is not yet listed there and Add Operation -> Mix.

You may need to switch the “Show All Channels” toggle to Yes to display all the channels and there you can set your input channels to the corresponding output channels for the DAC.

For whatever reason, it still doesn’t work. I send you 2 screenshots :
1- working with output1/2
2- not working as soon as I choose other output (for example 3/4) 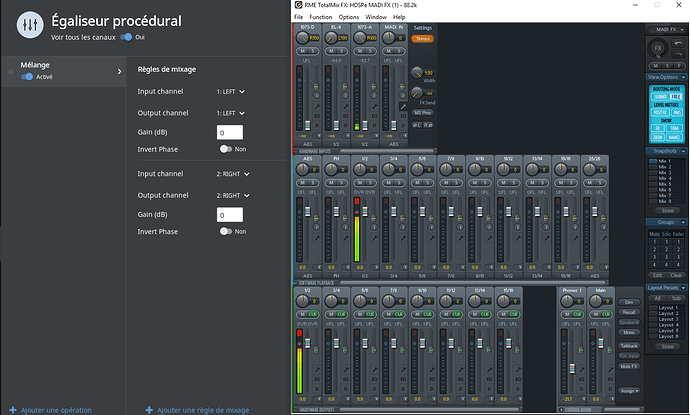 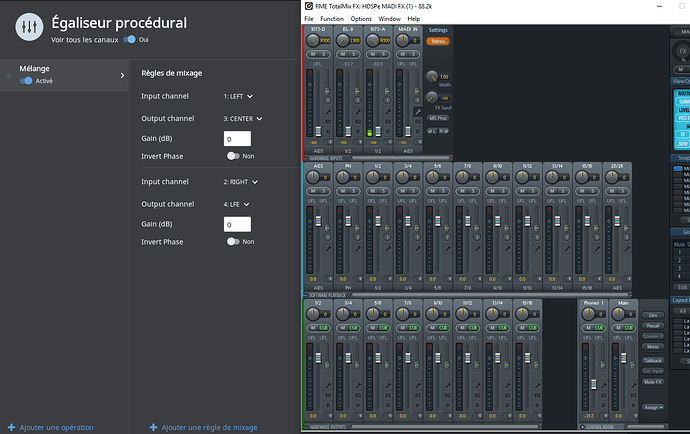 I keep investingating on this of course. I will keep you inform when I understand what’s wrong. 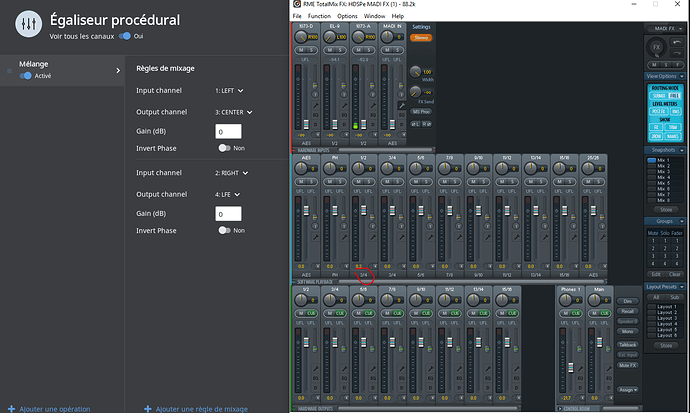 But obvisously, it shouldn’t work that way…

To be clear on my problem :

Those 2 stereo playback can be routed to my AES HW OUTPUT.

I absolutly don’t want to route stereo 1/2 playback to my AES output because it has already another routing in my config.

Just a +1 here for channel pair selection on multi-output devices. I have an RME-UFX plugged into my PC or Mac and of course by default Roon will output to AN 1+2 - ie main outs when in practice I always want Roon to output on a much higher number channel pair (The UFX has 30 output channels).

I know there is some channel selection on the procedural EQ setup, however I have some issue with this:

I also have my DAW as the main user of channels 1-8, so like Yannick, I want to output to a higher channel number than 8.

Please consider implementing this for all audio driver types, not just ASIO.

Can you confirm how many channels you are using in the Device Setup tab for the zone? You can access Device Setup by right-clicking the zone name in the bottom right of Roon -> Device Setup. Then, you will need to click on “Show Advanced” and navigate down to Channel Layout. Can you post a screenshot of the available options?

@Adam_Goodfellow - Thanks for the info here. I will need to discuss your issue separately with the technical team but this seems like this kind of request would belong in the feature requests section of this site. 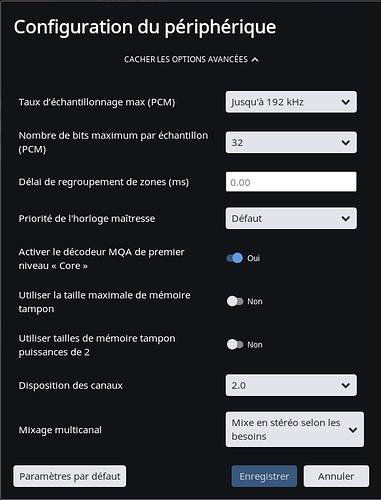 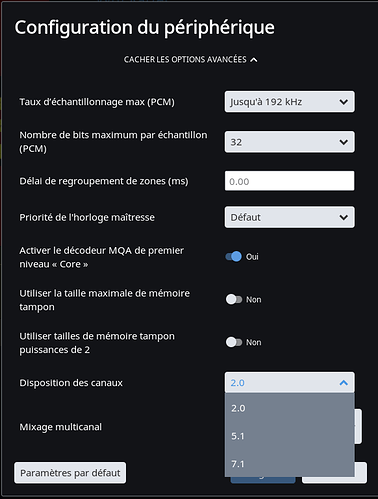 Can you try setting the number of channels to 7.1 and see if this helps with the issue? This would be “Disposition des canaux” in your screenshot. After setting this, I would try the procedural EQ mixing once more.

My 8 first sofftware stereo outputs are already in use in my set up and in all my DAW audio projects. It would be a mess for my old project if I re-route those outputs. That’s the purpose of this support ticket.

It would be great to have the complete list of available outputs (in the device setup menu) for each audio device detected.

Now, it’s better for me to use “system output”.
However sometimes (for some reason), with “system output” selected, ROON can’t access the audio device . Not a big deal, I will use that in the meantime.

After some further experimenting, I am not sure that it is actually possible for Roon to be persuaded to output on a channel beyond 7.1.

I also think that the Show All Channels switch above the Procedural EQ, Mix operation is probably superfluous in that any output beyond the currently select channel layout (in advanced device settings) appears to be ignored.

Given where each of these settings and channel controls are within the overall Room signal path this actually now makes sense some to me. I may be wrong, but I also get the feeling that when this was implemented, someone within Room may have also got a little confused (we have all been there) about the function of this, or maybe I still don’t understand how it appears to function.

The impression I get it that Room wanted to make available a means of controlling how channels were mapped with a surround output setup, so for example, if you want your stereo to only output on the side L+R, you can do that. Or, you want to create your own up mix or down mix you can do that.

What it appears you cannot do however (despite appears within the UI) is to map any of channels 1.8 (In 7.1) to any channel outside of 1-8 because later in the Room signal path there appears to be an automatically injected function to map the channels to the assumed output layout (2, 5.1, 7.1 etc). If your channel mix setup references a channel beyond the 7.1, it appears this results in an unknown to 7.1 mapping being inserted. I suspect this mapping will effectively remove channels beyond the selected layout.

To Illustrate, with settings as shown: 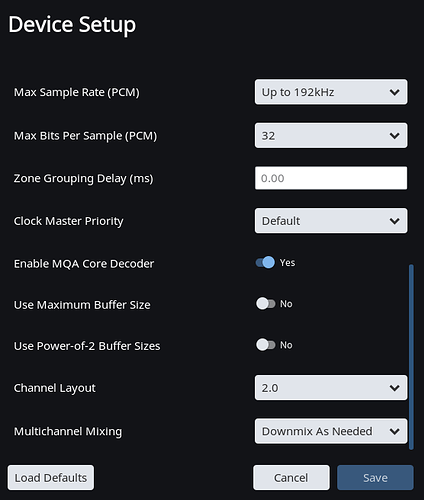 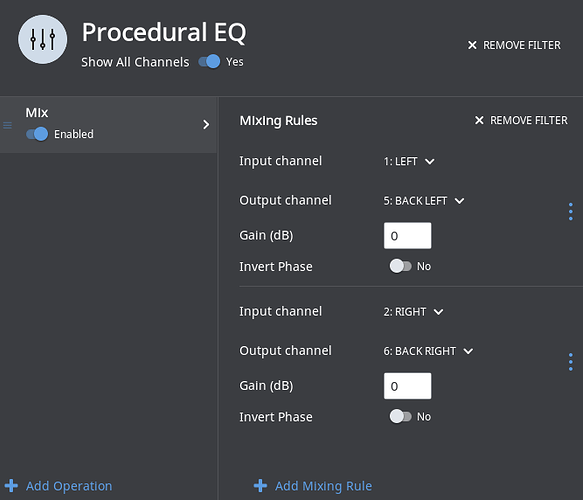 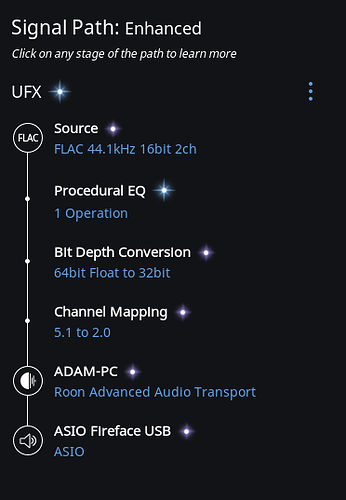 This results in no audio to any channel on my RME UFX.

I believe this is because the mapping in the Channel mix is outside the selected layout (2.0).

Of note, Roon seems to notice that the highest channels I have mapped as outputs fit with a 5.1 format, and therefore it is attempting to map from 5.1 to 2.0.

Oddly having selected Downmix as Needed, there is apparently no down mix and instead the Back left and back right channels appear to be just dropped. In total mix for the RME UFX - there is no indication of any audio output on any channel. Perhaps this is as indicated in the signal path capture I have included which indicates Channel Mapping.

If I repeat this test with the layout set to 7.1, but everything else left the same, then I get audio out on channels 7,8 (Oddly - I might have expected 5,6, given Roon’s labelled of my selected channels as 5,6).

To get the output on the expected channels in this case, I have to enable

Now, if I change the Mix mapping to the AES channels (with the RME UFX, these are 13,14) and also restore the Swap rear and surround to off, then I loose audio again. Also the signal path changes to the following: 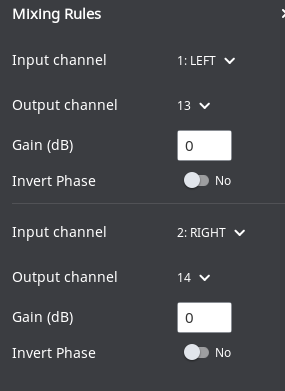 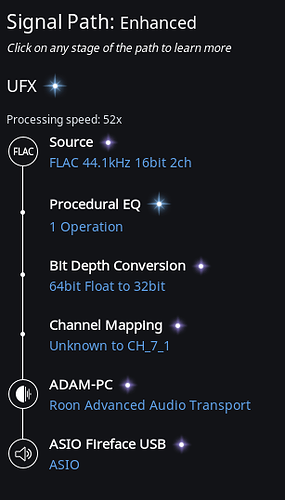 My conclusions are therefore that:

Thank you for the detailed report on your findings. I’m placing this information in a ticket and will pass it along to the QA team for further analysis.

The development team has clarified that Roon is limited to addressing the first eight channels of connected audio devices. I have gone ahead a filled a feature request ticket based on the feedback in this thread. In the meantime, we are discussing how we can possibly reduce confusion about the channel mapping and DSP mixing features.

I would also like to kindly ask for more channels. I am using Audiolense in a 5 way active speaker system and would be superhappy for a possibility to use 10 channel convulsion files.

Second that request. Running 5 ways but is forced to use additional convolver. Wold be perfect to simplify chain one step

I would also like to request support for more channels.