All of my playlists have been created in iTunes and are imported automatically into Roon as per the instructions provided here: https://kb.roonlabs.com/Importing_playlists. Up until several months ago, all of my tracks in album view would display their associated playlists below the track title in blue hyperlink. Then certain tracks would show their playlists and some would not. Now, none of the tracks in album view show their associated playlists. How do I fix this problem? (I have searched the knowledge base but I can’t find an answer to this problem). Thanks!

Can you share a screenshot of one of these albums as well as a playlist showing the track from that album?

Apologies for the late reply; i’ve been traveling. 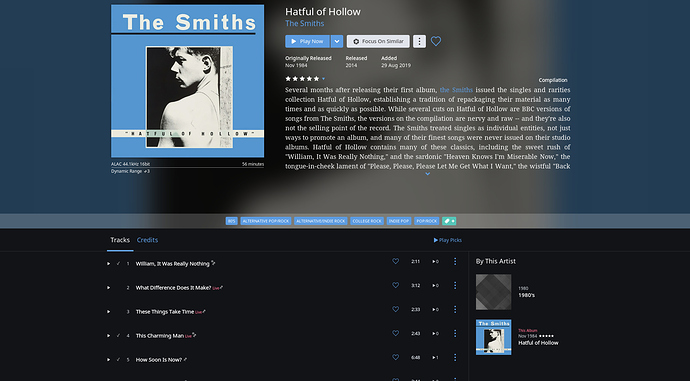 Can you find the playlist for the how soon is now and post that too.

If you go to the Tracks browser and filter by track name to see How Soon Is Now?, do you see any other versions of this track?

No, just that version of the son. However, the associated playlists just came back up: 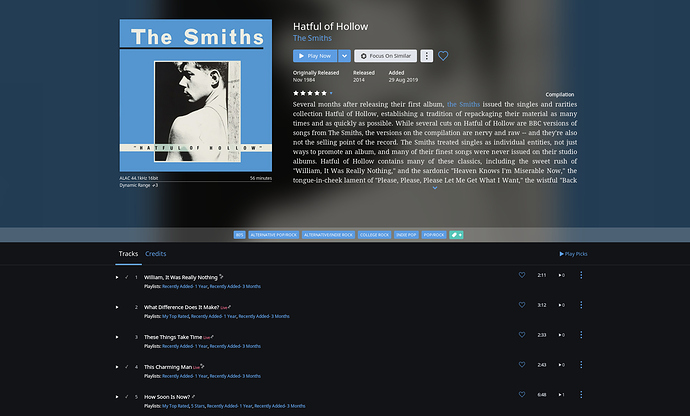 Do I need to have iTunes open to have these load properly?

No, you shouldn’t need iTunes open. Are the playlists remaining shown here, or are they regularly alternating between visible and not?

Any thoughts on how I can fix this?

Do they return after a reboot?

After closing the program down and reopening, yes they just did.

Next time you notice this behavior occur please make a note of the time that you open the page and the playlists don’t show. Respond here with that timestamp in your local timezone and we will enable diagnostics.

I am having this problem, too (also with iTunes watched playlists). Any updates?

Start a separate support thread as your set up will be different.