If I pick a particular track on album to play, at the end of the track Roon does not, as one would expect, play the following track. Instead it jumps to a different track on a different album, seemingly randomly. In one case, it jumped to a track on an album I don’t think I have ever played. Is there any way to stop this?

Disable the “Radio” mode.
Here is a post by @andybob

Turning on and off Roon radio Support

[image] View Queue from the music staff or stave in the footer [image] Toggle Radio on and off using the switch in the right panel If you just want Radio to stop playing, hit the pause button in the play controls. Turn it off from selecting another song using the above toggle.

I am not quite following you. As far as I know, no radio was on. I did not find the leak very coherent…

Its not a radio station it is Radio Mode and it is on by default. See here on the right. Use the “X” to allow turning off. 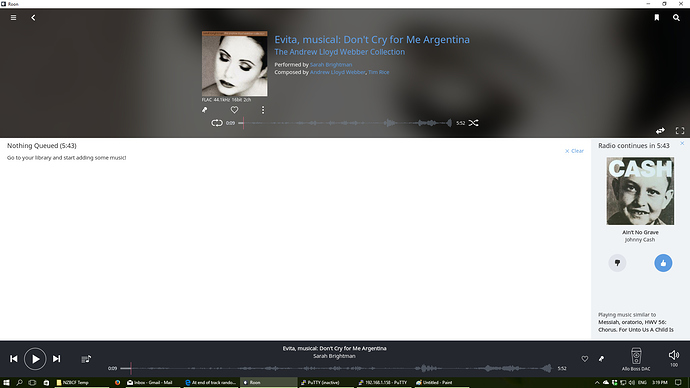 [quote=“diver110, post:1, topic:25385”]
If I pick a particular track on album to play, at the end of the track Roon does not, as one would expect, play the following track.
[/quote]Roon will only play the track (or tracks) that were selected.

After that it will either stop playing or if Radio mode is enabled it will select other tracks from your library using the first track as a seed.

If you wish to play from a selected track and the rest of the tracks in the album as well it’s a slightly different work flow:
Long press or right click on the track and then select play from here (at the top of the screen).

Hope that helps, also have a look in the Roon Knowledge Base it’s a good source of “how to” stuff.

Radio was indeed on. In my system, to find that (and anything but intuitive) one has to click on the musical note icon (does not appear in Tony’s screen shot), that opens up the queue and shows the radio status. Carl’s “play from here” also works. Thanks for the feedback. If I had designed Roon, it would have different defaults.

Thats because I had already opened up the queue.