Attempting to set up a Roon Core on a NAS

I am trying to set up a Roon Core on a Synology DS218j. I downloaded the .spk from roononnas.org and went to the Package Center on the NAS, and select for all publishers as instructed, and selected Manual Install and browsed for the network file which I also did, but when I click next, it tells the “This package is not supported on the platform of DiskStation or is incompatible with the current DSM version as shown in attached screenshot. I am now lost. Can any kind person assist? 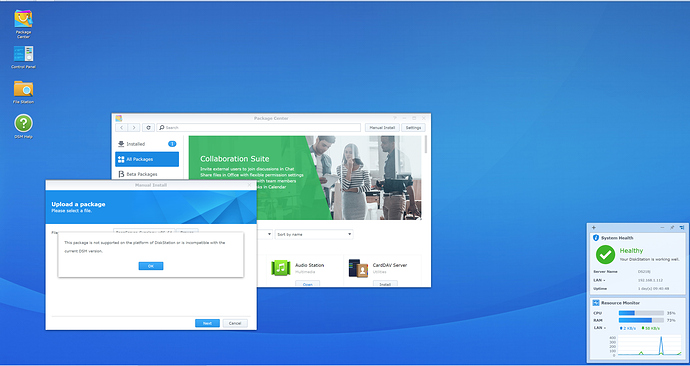 The DS218j uses a 32 bit processor. RoonServer and the associated NAS packages are only compatible with 64 bit CPUs (generally the + series units with Synology). I don’t believe there is any workaround for this.

Found another post on this issue with this link https://kb.roonlabs.com/Roon_Server_on_NAS

As @JWC mentioned, 64 bit is a requirement.

Thank you. That is very sad. Learning curves can be expensive.

The frustration is building. I accepted the loss and ordered a DS218 which is 64 bit and a 512gb SSD. They arrived and I eagerly set them up to get exactly the same page showing exactly the same comment as the above photo. Not supported on the current platform of diskStation or is incompatible with the current DNS. I refuse to buy another NAS. I read the suggested link before buying it and the drive I chose has 64 bit and 2 gig of RAM. Is there anything I ca do before I give up and use Roon from my PC as I was, costing nothing in setup?

From the resource link posted above:

From the DS218 datasheet:

This is an ARM CPU – Roon Server won’t run on these.

Ask before purchasing would be a better strategy.

I asked and was told a Synology NAS worked so I bought one. It didn’t work. I perused here and the Roon site and was told here that 64bit and at least 2 gig ram was needed. I did see the ram quoted as giving faster performance which is why I went for the 218. No mention anywhere of CPUs to avoid. I have spent hours searching and never seen any of this. In the list of preferred NAS units, none of this has been mentioned. Why on earth is there not a list of models to get and avoid. I am not a computer expert, but reasonably and above average use and experience. I can’t believe I am the only one who has been caught. In single and dual bay NAS there only appears to be the 218 and the 218+ that I have found. Then they go to multi bay versions. I considered the +, but the comparisons on line only listed functions I don’t want. I just wanted a stand alone Roon Core. Not blaming you. But Roon is not helpful in this area. I spent ages looking for problems to avoid. Never saw this.

This question should have asked in the beginning. Why do you want to use a NAS to run Roon?

Then best use an intel NUC and ROCK – the recommended small configuration is around the same price as a underpowered 2-bay NAS (with RAM upgrade, SSD for Roon DB and HDD or SSD for the music library) but considerably cheaper than a NAS which meets the hardware recommendation CPU wise (intel Core i3).

I have no experience with NUC and they seem to be similar price to a suitable NAS. They seem to come in various levels and I don’t want to start that again. I sell expensive Hi Fi and two of the companies recommended Roon and strongly recommended a NAS. I have been using Roon for a while using my PC as a Core. It is often hard to log onto and either phone or computer needs to be restarted and it seemed a good idea to have a stand alone unit that is always one and can be taken with me for Shows. I have spent so much now I might as well stay with the NAS which can be used for other things. It appears the Synology DS220+ should work. It has up gradable memory as the advice seems to be 2 gig is a minimum and another 2 isn’t expensive. It has a Intel Celeron J4025 processor. Should that be OK? Maybe I won’t gain anything, but thanks for the advice.

Recently I installed a DS920+ with a total of 8Gb memory. My library is relative small (about 5000 songs). Roon is working perfect with fine sound quality. If neccessary the DS920+ has room for a additional internal SSD apart from two HDD’ in RAID.
The great advantage for me of using a NAS for Roon core is that a can use the NAS also use for other purposes; more applications for money.

Happy to see it is possible. The DS920+ is more than I need and more costly than I would like although I am getting close to that. I don’t need multiple bays. but I apparently need more speed. I was thinking maybe a QNAP TS-251+ as the price is getting up there but not ridiculous. I have been advised to have a stand alone unit, although I am not sure why other storage is a problem, especially if it isn’t constantly working, but I can use my first DS218j for storage as I have it now. At least other people have got the QNAP TS-251+ working OK and I just want to use something that works, plus it has a Roon app and a click should achieve the wonders I seek. Originally I thought " Get a NAS, they are not expensive and should work well" I didn’t realise Roon needs a super computer to play a song. Unless some "knowing " person advises me not to do it, I will go that war.

You can also think about the DS720+. It has the same processor as the DS920+ although memory max is 6 Gb. Furthermore Synology’s operating system (DSM) is more user friendly than QNAP’s.

The 220+ is below minimum specification it may work for you but it isn’t recommended.

Hello Greg, there was a link posted above with information, pros and cons, about running Roon on a NAS. Have you looked at it?

I started my Roon experience thinking about using a NAS. This forum is full of posts on issues with different platforms. I think maybe that scared me off. I went with the NUC instead and have no regrets. NUC8I7BEH, 16gb ram, Samsung m.2 and internal Sata drive for my library. Overkill but I haven’t experienced any issues. About the same cost as an appropriately configured NAS. The NUC and a robust home network just works all the time. So far anyway.

Wish you good luck with your choice whatever it is.

Thank you for your help everyone, I ordered the QNAP TS-251+ with 8 gig of ram. It has a roon app so easy to set up and I will really only be using it for Roon. Hopefully it will just he happy listening from now on.

I set up my QNAP and everything was relatively straightforward in a confusing way, but before I started on this journey, I followed the directions to do a backup. I then copied the backup file to another folder on another drive and when I got the NAS working, I copied it to a folder on the NAS. When I get to Roons log in page, I select set up from a backup and it asks for the folder containing the backup, but the backup folder is grayed. Is this the wrong file or something missing? out and it said no backup file found. The file is called Roonbackups.zip.url. Is this the wrong file or something missing?

I have a QNAP NAS and I was all excited when I first got it that I could run a lot of services on it. Man was that a letdown. The “iTunes Server” (note the quotes) is firefly, which was abandoned like a decade before my NAS was made. Everything I tried was so much worse than running the same service on a linux box or raspberry pi. I now use my QNAP as a glorified time capsule for mac backup only. When it fails at that, I’ll throw it away (with great malice) It is a reasonable file server, but that’s about it.

Maybe NAS machines have gotten better, but I’ve been burned and don’t want another, I’ll stick to full blown linux boxes in future.

The NUC and rock path is the way to go with Roon IMHO unless you want to combine many services in your home and like to tinker then roon server on the OS of your choice makes a lot of sense.

My journey has not been smooth. All is finally working, except I don’t want to set all folders up again. Hopefully I can restore the backup, but just as everything went wrong with getting wrong NAS twice and I had copied what I believed to be the backup, the backup drive I had the original backup on corrupted and wouldn’t read until I formatted it. So if I don’t have the right backup file its “Do it all again”. I didn’t know about those alternatives as the day or so searching for how to do it didn’t mention them. Often the advice of “experts” is not helpful.