Audio device not being seen at Roon app

Paul, I was thinking of doing that. Thank you. I will let you know what I find. If I can get through the weekend with it being stable on connecting, I will feel that we have it. Thanks for all you help.

Paul and all, This is getting beyond frustrating. I am starting to think that I am going to have to abondon Roon and I really don’t want to do that. Everything was working great last night, once I got Roon to recognize my DAC and today, once again, it won’t recognize. Is there a users guide that shows me what I need my network setting to be so that my DAC is seen by Roon. Roon recornizes my Synology library but it take me forever to get my DAC recognized. There has to be a network guide for Roon that is in English and something that helps with my MSB DAC. Please help.

I’d change your router as others have your server and endpoint with no problems. 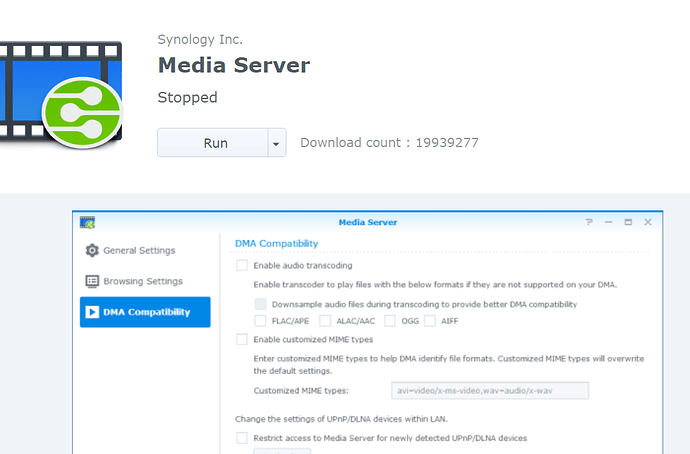 I had this Media Servier running on my Synology as well as the Roon server. I stopped this server and it seemed to recognize Roon right away, but I am not sure if that is a coincidence or if the two servers were fighting each other. My router is working fine with everything else one the network. I guess if this continues I could get a new one but that seem strange to just replace the router. Thanks for the advice though. I will keep you posted.

You could get one from somewhere that allows returns so as not to lose out financially if it doesn’t fix things.

A quick trawl of Synology user groups (Web or facebook) indicates that the majority of users only use the NAS for storage & Roon backups, they don’t appear the run the core as it is too demanding on the CPU. Most appear to use a separate NUC as the Roon core (or a convenient Windows10/Mac device). I run my setup the same way leaving my synology for storage & mail-server activity.

You could try disabling the Synology media server for a while to check if thats the source of your problems but ultimately a NUC/PC/MAC running as a core/server might be the better option. Anything is possible but it doesn’t sound like your router is the cause of your problems.

(Don’t forget to keep checking Zero “Config” as it might be getting reset).

Paul, I will keep an eye on it and if it continues I will give that a try. Is a Raspberry Pi a safe alternative? I am running Roon on a thumb drive plugged into the Synology DS 1515+ and loaded 16G RAM. When the device is recognized it runs fine. Thanks for the option though.

Is a Raspberry Pi a safe alternative?

Hello @Ed_Hilston, do you have the ability to connect your core and endpoint to a hotspot on your phone to test a different network?

Nuwriy, Good thought. Fortunately, I think I have stumbled on the to issue. My Synology was running a secondary media server that I use for my Oppo. Once I shut that down, thing see to be working. I will be days before I am confident but that looks like the case for now. I will keep your suggestion in mind though. Thank you very much!

Can you recommend a model NUC and send me a source of information regarding using one for a Roon core. I am not familar with them nor their operation. Looks like I need to get more hardware. I was not planning on that. Thanks for your help.

Hi Ed, I’m not particularly qualified to advise on the NUC as my core has always been run from windows10 or Mac OSX. With the NUC option you head into using ROCK as the operating system, there are many very helpful people in the community that would be able to assist if you experienced problems or needed assistance.
The following is worth a read and will give you some examples/costs.

There’s no reason why you can’t utilise a reasonably well specified desktop pc or mac if you have something spare.

Thank you very much. I greatly appreciate all your help.