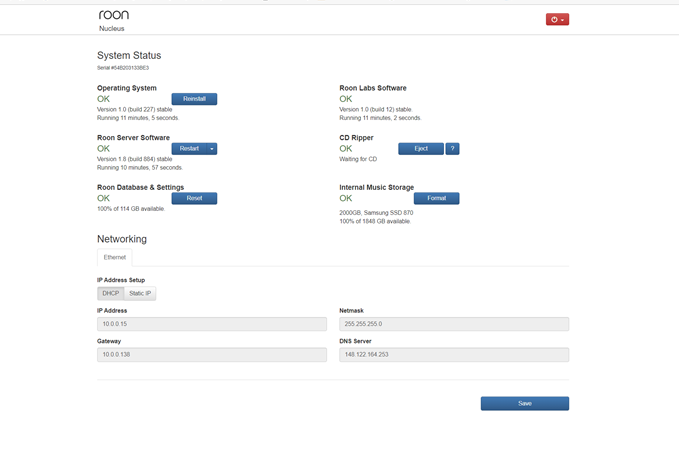 Not much to describe here. Using a WiFi ruter from our phone company with two Wifi repeaters. The Nucleus is connected to LAN port on one of the repeaters. There are no problems with anything that would indicate a problem with internet/WiFi connection.

So far have only ripped in 4 CDs and connected Qobuz.

When I try to set up my Formation speakers as audio zones in Roon, I cannot get Roon to recognize both/all of my B&W Roon ready zones at the same time. You can see from the screen shot that Roon recognizes the 3rd floor home cinema zone (3. etg. hjemmekino) as Roon ready and also as "Other network devices. While the Duo speakers on the 2nd floor (2. etg. B&W…) only show up at “Other network devices”, but they are also Roon Ready.

I have restarted and done factory reset with the B&W appp, and then reconnected the B&W speakers/zones, several times. This time I connected the 3rd floor first. The 3rd foor shows up, but I can’t play anything from Roon. Previously, the zones were reversed…the 2nd floor showing as both Roon Ready and other while the 3rd floor was only other. I could select the 3rd floor, as an “other network device” and it would play about 30-60 seconds and then stops. 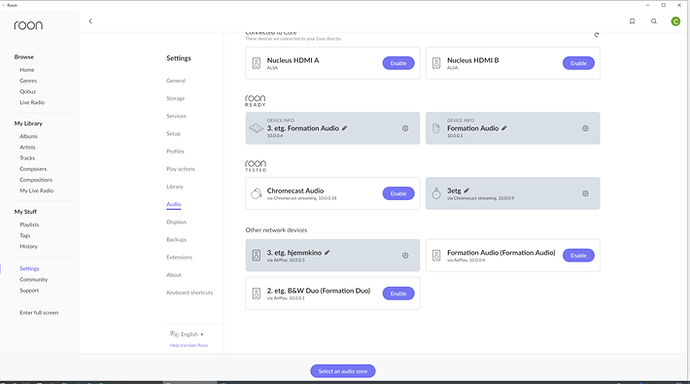 All Roon devices need to be on the same subnet. You might start by verifying that all the devices and core are on th bsame subnet.

Update:
I have now forced all the B&W components over to the same Wifi repeater. And I still have the same problem. Now the 2nd floor Duo speakers show up both as Roon Ready and “other network devices” while the 3. floor “home cinema” (hjemmekino) only shows up as "other… " but not as Roon Ready. The repeater that the Nucleus and all the B&W components are networked/connected to are on the 3rd. floor, so it makes no sense that the speakers on the 2nd floor show up but not the ones on the 3rd floor. When I play to the Roon Ready 2nd floor playback is fine. But when I play back to the “other…” 3rd floor playback is VERY unstable, constantly stopping (buffering?).

I have tried all the typical things like rebooting the Nucleus and restarting the speakers, but no change.

I sure hope somebody has an answer/solution for me, this is very frustrating. 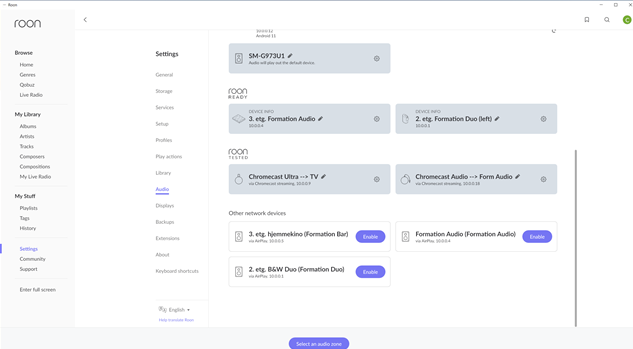 Thanks for answering so quickly!

You mean the B&W speaker also? That kind of defeats the purpose of multi-room sound in a house with different floors… The wifi system we have is “mesh” and all points in the network have the same name, but there is a router on one floor and repeaters on the other floors, and almost everything is on the same “subnet” if subnet = same repeater or router. And that does seem to align with the problem I’m having. Ugh.

Is there any workaround?

Does this also apply to the Roon remote I use to playback?

So then my “mesh” network does in fact appear as one network, which is what I understood of what “mesh” is. You can see from the picture above that all audio components do have the same 10.0.0.xx and that was true also when they were getting their signal from the different repeaters. But now all have been forced over to the one repeater and still the speakers in the zone “3. etg hjemmekino” still do not show up as Roon Ready, even though they are, and even though at some point did show up, at least fleetingly.

So I still need help figuring out how to get all the Roon Ready components to register on Roon.