I’ve had numerous email exchanges with Peter in the past with regards to the DMP-1 suddenly disappearing from my network when playing Roon via USB. It behaves like a memory leak. I don’t get the issue using I2S. Prior to the latest update I’d not had the issue for a while but since the latest update I’m getting it frequently (after a hour or so of play time).

Any other DMP-1 users experiencing the same?

I’ve been using the DMP-1 i2s connection to DDP-1 without issue. I will switch over to USB and DoP for some testing.

Thanks. You may need to leave it playing for a few hours. The issue presents itself at an indeterminate amount of playing time. But the symptoms are that the music stops and the DMP disappears as a Roon endpoint. The only way to recover is to reboot the DMP and then do the MPD/Roon shuffle through the DMP admin UI to get the endpoint back in Roon.

No problems after a couple hours of playback last night. I was playing mostly DSD-64 files and Tidal. Here is a screenshot of my DMP-1 settings with firmware version. 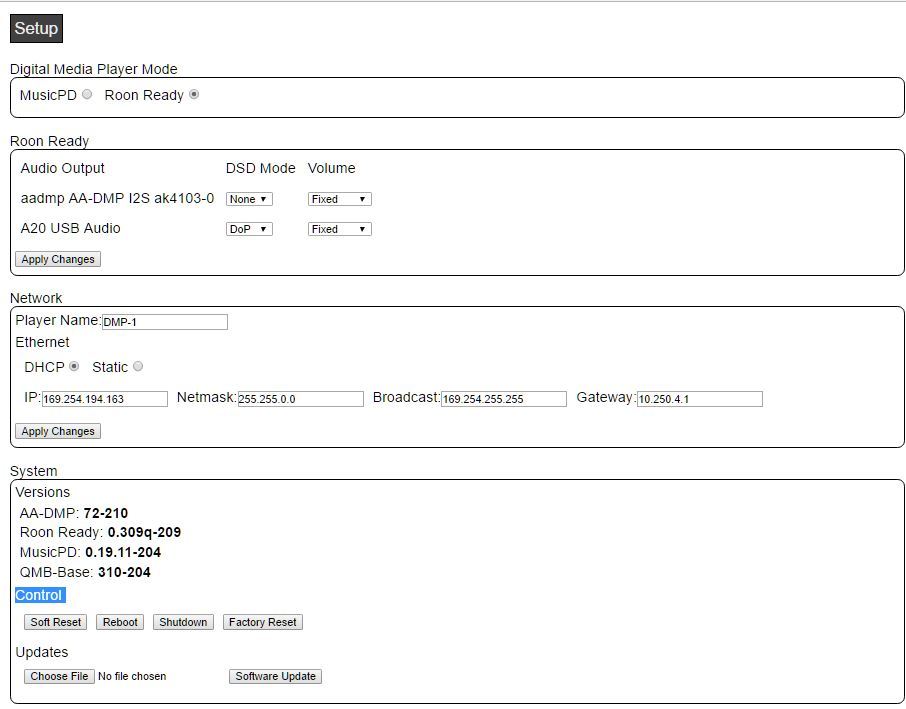 Any chance you can leave it playing for a while longer then a coupe of hrs? I’ve seen the issue happen quickly, but also after 6 or more hrs!

I’ve been happily playing via I2S for over 24 hrs so far with no issue.

I’m just curious why you tend to use I2S over USB?

Hello Mike,
I read on the internet that i2s is superior to USB, here’s one good thread I referenced.
http://www.computeraudiophile.com/f6-dac-digital-analog-conversion/i2s-vs-universal-serial-bus-industry-standard-cables-connectors-and-communications-protocols-between-computers-and-electronic-devices-25467/

Now that being said, I am in the process of comparing USB vs. i2s and will figure out which sounds better to me.
See this thread I created:

Hello, I am using an Audio Alchemy DMP-1 running as Roon endpoint connected via i2s. I must admit I hate seeing all the sample rate conversions in the signal path. I’m doing my best to A/B both methods but any differences are either subtle, or I do NOT have a good ear for these things. Theoretically which approach should be better, who’s actually doing the sample rate conversion, is it the Roon software? I searched the web but could not find clear answer on whether you can do DoP over i2s. Odd…

I will fire up the DMP-1 over USB for the next 8hrs. I’m in the other room though so its not constantly monitored. If music stops, I will notice of course. Will report back findings later tonight.

It’s definitely not a corrupt file as it happens on completely different tracks. I don’t also see how it can be network as I’ve been playing via I2S from the same NAS for well over 24hrs non stop now.

I know from previous email exchanges with Peter at AA there were memory leak issues before with the USB playback and the symptoms are identical.

I need to check if we’re running the same versions.

Looks like I’m running a later MPD version but that’s all: 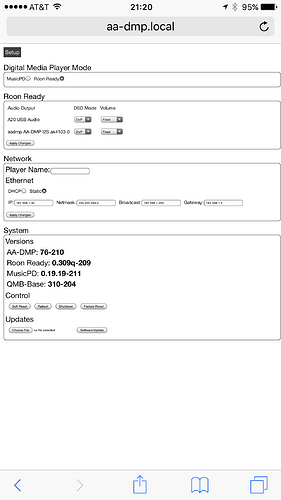