@Support
After the most recent update of the Roon core software, automatic backups and forced backups of the Roon database are failing.
Roon version: 1.4 (build 294) stable (64bit)

Thanks for any help you can provide.

Attached is a screenshot of the error message: 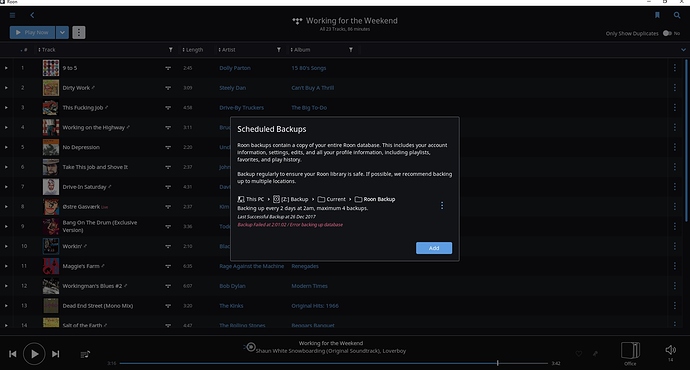 Hi @Luis_Puncel ----- Thank you for the PM and sharing this observation you have made with us. The feedback is appreciated and sorry to hear of the troubles. We typically try to handle any support related questions on the “support” thread of the community site. Would you mind if I made this PM a public post and we can continue from there? Let me know.

In the meantime, from your report you mentioned that trying to create a backup to another location failed, my assumption is you tried to perform the backup to the one of the NAS units you have, please confirm. Secondly, by chance have you tested the dropbox backup feature? Just curious what the experience was like if you have.

@Eric
Thanks for the response. I thought I was posting to the “support” thread rather than a private message. I’ll have to do it more carefully in the future. It is okay to post it in the support thread.

I had only tried creating the backup on another NAS device. Your question prompted me to try backing up to a USB drive, and the backup was successful. So I guess the problem is with NAS devices. I haven’t tried the dropbox feature. I’ll give that a try now and let you know.

FYI, I tried backing up to Dropbox. It didn’t go very well. I took 7 1/2 hours to complete. It kept stopping with a message saying it lost the connection, and then it would start back up on its own, but because of that, it took too long to be a practical solution.

The only way for me to back up at this point is to a USB drive.

Thanks for the follow up @Luis_Puncel and sharing the observations you have made while testing with the dropbox back up feature. A few things moving forward.

“…automatic backups and forced backups of the Roon database are failing”

Note: During this troubleshooting exercise please make sure you are trying to backup to the mentioned location in the provided screenshot

Sorry for the delay in my response. I have just been working a lot of hours and couldn’t take my eye off the ball. Somehow, the situation seems to have corrected itself. However, to answer your questions as to while I was still having the problem:

I tried backing up manually to multiple NAS devices and none of the back-ups were successful. As I mentioned the only type of backup I could get to work was to a USB drive. Also, the back-up to DropBox theoretically worked, but it took so long due to frequent timeouts, it isn’t a practical alternative.

The NAS drives are connected by ethernet cable, and there is an ethernet switch between the NAS and the router.

There was an abundance of space on Z (NAS) as well as all network shares on all of the NAS devices.

For some unknown reason, I haven’t been able to reproduce the issue. I can’t recall an event or trigger that may have fixed the problem. I have now done “Backup Now” to multiple NAS drives that have all been successful. Roon hasn’t yet backed up according to the scheduled backup, so I don’t yet know if that will be successful. I’ll let you know if the scheduled backup doesn’t work.

Thanks a lot for your help as well as your patience in between my replies.

Thanks for touching base with me @Luis_Puncel, the feedback is very appreciated and no apologies necessary. I am very pleased to hear things have stabilized since we last spoke.

I am going to be closing this thread out BUT if the issue happens to resurface just drop me a PM and I will be glad to help continue troubleshooting.