B1159 what rock OS version should I be running

What ROCK OS version should be running under 1159?
I have an issue but suspect I’m running the wrong OS.

Which one are you running?

Hi Everyone, It’s been a while since we’ve issued an update for RoonOS and we have a major change along with some minor fixes which do need to be released. The largest change in this build is support for booting via UEFI which is especially important as Intel phases out NUCs with legacy boot options. Taking this release as an update will not change your device to UEFI boot or require any other intervention. This change will only apply to new installations. There is no practical (or audible) r…

(Even if you were in earlyaccess in the past. The earlyaccess 253 was also intended to update to production 254 automatically)

Hmm I’m not getting any prompts. Probably need to explicitly opt in to early access as my core is on Alpha.
For another time

Build 253 was released a while ago and came with some big changes to the old branches set up.
Some of us had a few issues to start with.

Don’t know whether this is expected behaviour, but after rebooting with Build 253 installed, I first had to log in, then I got the eternal jellyfish for about 4 minutes before finally landing on a Deauthorize screen. Clicking the button finally got me into Roon (where I left it, so that was fine). I have about 60,000 tracks in the library (local and Qobuz) BTW: Yay! for UEFI support and the CD Ripper fix…

Edit: Second observation: the Metadata Improver was Paused, so I needed a sec…

Wont make any difference to what build of Roon you use, RoonOS and Roon are independant of each other. The latest ROCK just has some long awaited bug fixes and UEFI support.

Thanks for that - I was using the instructions on the main help page, which don’t work.

What is Early Access? The Early Access program allows Roon users to test the latest Roon and ARC features and fixes before they are released to the entire user community. Through this program you can have  early access (get it? ?) to new...

Plenty of them to go round.

Probably need to explicitly opt in to early access as my core is on Alpha.

Yeah I guess in this case you were orphaned and you have to do the manual version. There are instructions in the earlyaccess threads. For users of 253 earlyaccess, Roonlabs wrote that they would update everyone automatically to 254 production, so that people wouldn’t get stranded on an abandoned branch (as RoonOS doesn’t get the regular updates like Roon), but this hasn’t worked for everyone so far, either. I guess something similar happened to you.

I don’t want to be a drag, but my Rock is still on 253 earlyaccess and not updating to 254 production as the OP wrote. I am happy to switch manually, but I held off because I wanted to retain a test case for @AMP, because the observed behavior is not the same as the expected one. Would be nice if you could let me (and others above) know if you abandoned this and we should update manually

Well that was interesting, “database error but don’t worry roon support are here”.
Quick hard reboot and is back up and running.

Will wait until tomorrow to see if the bug is still there.

Thanks one and all.

Yeah some strange bugs and one off weird things have happened with the latest OS Build.

I finally updated my MOCK build to B253 a few days ago (because our living arrangements are still in a severe state of flux my MOCK that is built up in the HDPlex case was still on B1072 from when I last unpacked it to move it from alpha to early access).

Usually I use the MOCK as my main sever but because it is in storage until we move back into our home I am using the little NUC10 as my main core, so the MOCK gets unpacked occasionally so that it doesn’t get orphaned later on.

The ASUS H270I motherboard has dual Ethernet ports and when I installed B253 Roon could not connect to the internet and it wasn’t showing up on my network at all. I thought maybe that @danny might have dropped support for for the Ethernet drivers and as it was a MOCK I didn’t report it but then I thought it would be strange to drop support for Intel as that is what NUC’s are.
I only ever used the Intel Ethernet port on the H270I, the other port is a Realtek and was always turned off on the Web UI.

So I turned Ethernet 2 back on and voila it was working, somehow in B253 the Ethernet ports got reversed, port 1 is now port 2 and vice versa.

I was very happy about this as I thought my MOCK had finally run its last Roon build!!! 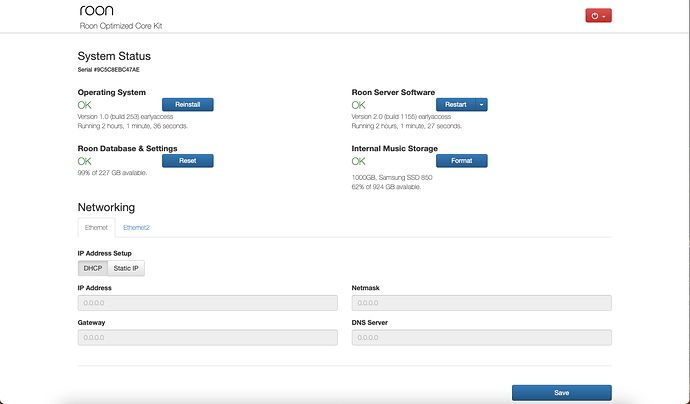 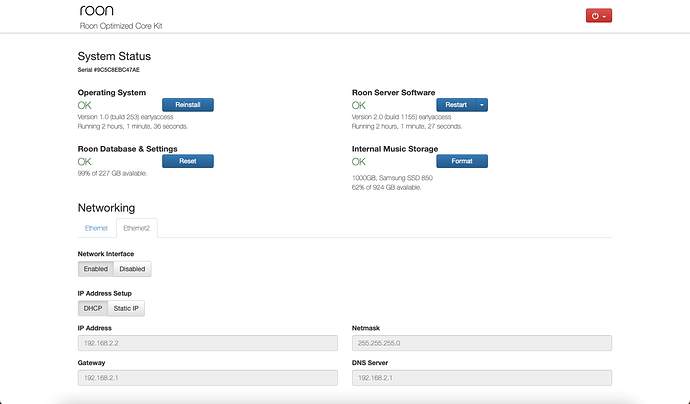 It is better to be using 254 production as mentioned above.

I just wanted to let you all know that since RoonOS isn’t something that’s under constant revision like Roon and ARC it’s not going to go through the same ongoing test → release cycle as those products. We don’t want to have you end up orphaned on the earlyaccess branch of RoonOS so we’re going to setup the update server to migrate ROCK and Nucleus devices which were updated with RoonOS 253 earlyaccess to 254 production. This rule isn’t in place yet, but at some point in the next day you’ll see…