Backing up at wrong time

Not relevant here but I stream exclusively to a Bluesound Node 2i over wired. It is the only thing I use Roon with.

I have Roon backups set for 2AM daily. Roon is running on my Mac but I’m not playing any music. It’s 11:26AM here and the backup has been going on for several minutes, really spiking my CPU because it’s backing and syncing to dropbox.

I haven’t listened to any music since last night at about 10. Roon was running at 2AM so no idea why it is waiting until now to start the backup or if what it’s really been doing is backing up for 9 straight hours

Can you please share a screenshot of your Roon Settings -> Backups tab?
Do you control the Macbook Pro from any other Roon Remotes/Clients or just from the Core Roon app?

Is your MAC sleeping - maybe while you are?

sorry for the delayed reply, and thank you for jumping in. 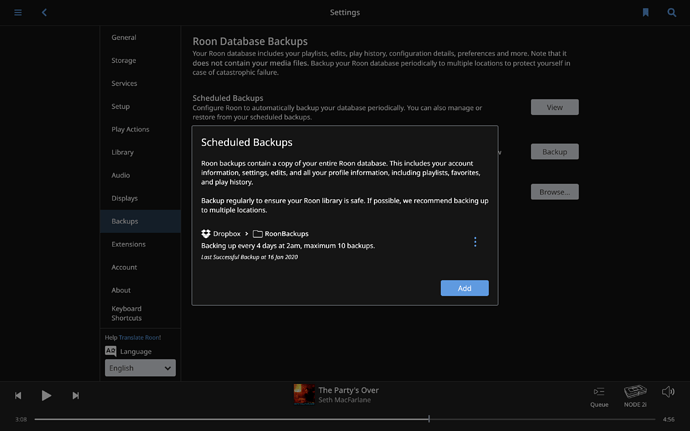 I mainly control the MBP from my iPad Pro but the instance that prompted me to post was noted when I was working on the MacBook Pro and not using Roon. I was doing other work and noticed because Roon was backing up, causing Dropbox to kick in and spike the CPU usage quite a bit.

Thanks. No, I have all sleep functions disabled, except for the screen. This machine stays on most of the time.

Can you check to see if you have the correct time/timezone on your Macbook Pro and iPad set up?

Thanks again for responding. Yes the time zone is correct on both my computer and my iPad. Not sure what’s going on but I reckon I’ll just need to work around it.

I really just need to switch Roon over to a dedicated server. It runs great on my MacBook Pro but that is a machine on which I do audio work and I can’t have the CPU spiking up like it did, or change the backup location away from the resource-hog known as Dropbox.

I will just have to remember to quit Roon when I’m working and then fire it back up when I’m listening to music until I get ROCK going.

How large are your backups? It is possible that Dropbox didn’t finish uploading the backup yet, I would check to make sure that you have set an upload speed of unlimited in Dropbox if you wish to keep using it as your primary backup method:

Dropbox as a cloud storage service is very popular and almost everyone uses it, I use dropbox with few people as a collaborator and after finishing my work I try to upload the files, but it takes forever to upload, literally it takes hours for a few...

It’s 2.9GB. It definitely wouldn’t take 9 hours to upload. I don’t have Dropbox throttled at all.

Really not sure what the deal is.

I’ve activated diagnostics mode for your account and what this action does is automatically upload a set of logs to our servers for analysis. It does look like the backup was still ongoing even though it started the night before.

Dropbox is fairly slow at transferring files from what I’ve seen, so you may want to try using USB storage to host the backups or send it to a NAS/PC and have that sync to Dropbox instead.

Thanks! I appreciate the help. I will move the backups to a local location. I manually started a backup tonight and it wrapped it up in about 20 minutes.