Backing up to hard disk

Depends what you mean by a local hard drive?
If you can access it as a network share and add it as such then yes.
Settings: backups: backup now: select location: add network share.
See pictures 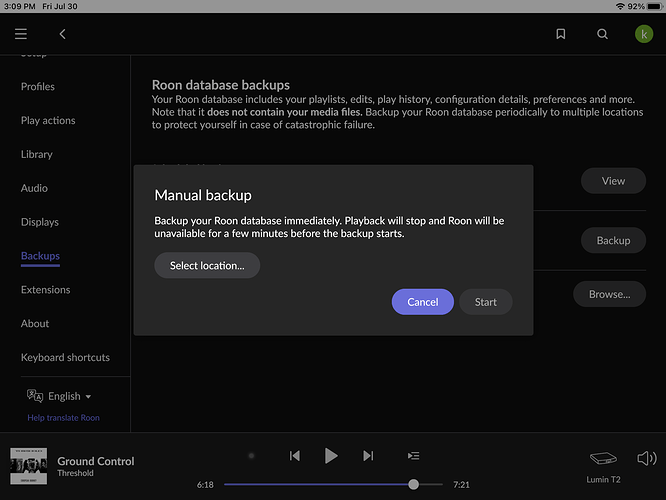 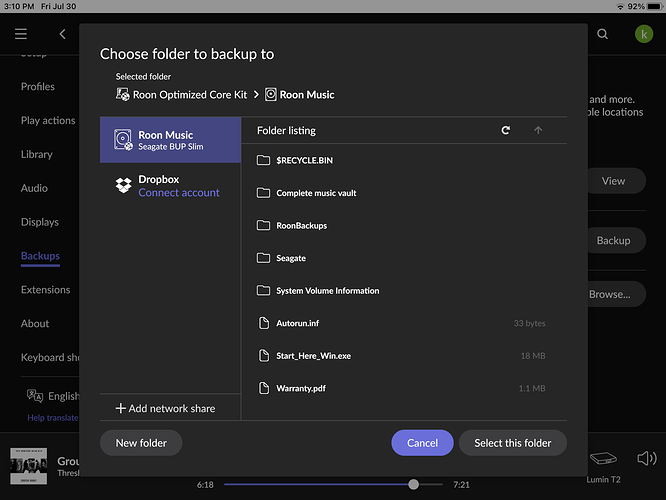 Or as I have done I just added a usb hdd to my nuc where I have music files and I backup to that, the seagate drive in second picture.
That way if my nuc fails I have backups on a separate hard drive to restore from

Thanks. I just set up a dropbox account so all done. Might go the usb drive route soon though. Not a fan of drop box

Note that this backs up your Roon data/settings but not the actual music files. These require b/u, too.

Edit: in this post, I’m assuming that you have an internal SSD drive in the NUC that you’re using for ROCK and you want to backup your music files to an external USB drive. Others above have described how to backup your Roon database to an attached thumb or USB drive.

Unfortunately, there’s no way to tell Roon OS to “sync” the music files that you have on an internal SATA SSD to an external USB drive. And, there’s no SSH access for you to login and run rsync to do a backup manually.

However, if you have another computer on the same 1 Gbps LAN as your NUC, you can use the SMB protocol to mount the Data share on the NUC to that computer. Once mounted, you’ll find the internal storage and any connected USB drives mapped as subdirs under Data/Storage. For example, the internal SSD will show up as Data/Storage/InternalStorage.

If your computer is running macOS or Linux, you already have rsync installed. You’ll be able to run a backup manually using a command-line like this on macOS:

To connect the Roon OS share to my MacBook Pro (running macOS), I opened Finder and typed CMD+K (⌘+K) to get the dialog for mapping network storage. I then entered smb://ip-address-of-NUC: 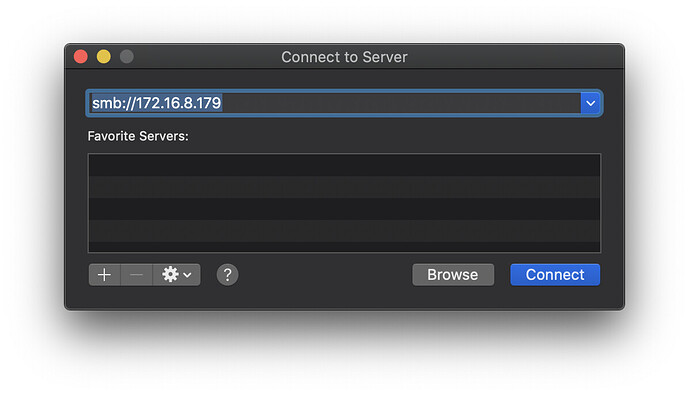 I connected as “Guest”. Once connected, the share from Roon OS was mounted under /Volumes/Data on the Mac. At that point, I used a script like this from a Terminal window to do the backup:

Linux users will be able to do the same thing, but I’ll leave mapping the storage from the NUC as an exercise for the reader. Hint: you have install the cifs-utils package and specify smb version 2.0 on Linux. For example:

MS Windows lacks an rsync command. The easiest way I’ve found to solve that is to install the Chocolatey package manager for Windows. The instructions involve pasting a command like this into a PowerShell that is run as Administrator:

Once that’s complete, I found it worked best to exit PoswerShell and then start a new PowerShell, also run as Administrator. I then installed rsync using this command-line:

I verified that rsync was installed by typing rsync --version.

The next trick is getting a usable shell on Windows. In five minutes of looking, I could not find a good package in Chocolatey, so I installed Git BASH instead. Once installed, I have rsync available in a Bash shell, and I can see the storage that I mapped from the NUC running Roon OS (the “Z” drive, in my case): 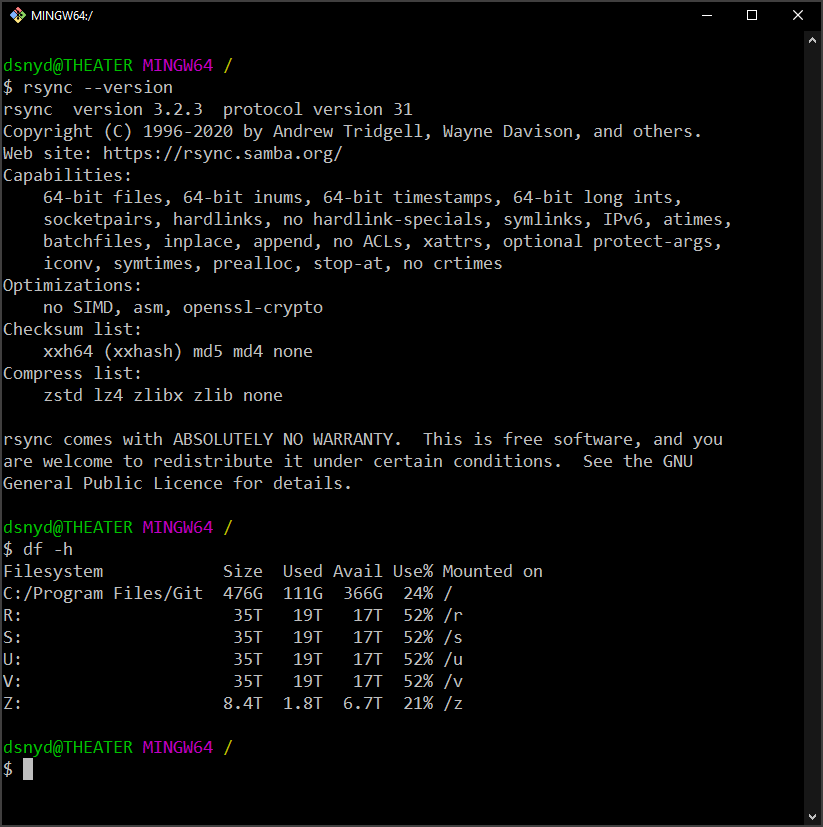 With that set up, the same script that I used on macOS works on MS Windows via the Git BASH terminal window. I just needed to update the mount (“MNT”) variable to reflect the drive mapping:

Here’s a dry-run that I just ran (excluding my sacd folder to save space): 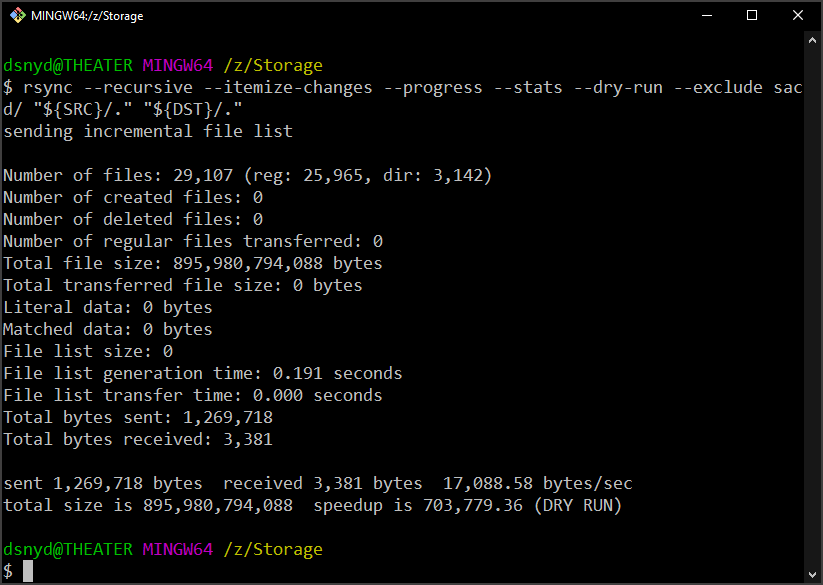 Note: the same sort of thing can be done with the external USB drive connected to the computer instead of the NUC. I’ll leave the modifications up to the reader.

Sorry if this is all a bit technical, but PM me if you have questions. Happy to walk you through it.

Cc: @kevin - in case something like this is worth adding to the Roon Help Center

Alternatively, a simple third-party package for copying/syncing the music files and folders between the Nucleus internal storage and a backup location (either a USB drive attached to the Nucleus or elsewhere) might be simpler for the majority of Nucleus owners? I use Allway Sync, but other solutions are available.

Sure, but I believe this thread is for ROCK users who tend to be a bit more adventurous than their Nucleus counterparts.

The approach I describe can be used for other file syncing applications, but many are based on rsync, which is preinstalled on macOS and most Linux distros and not difficult to add to MS Windows.

My system is an intel nuc running rock, connected to my router with a network cable. I then use either laptop or ipad to browse music. I dont have any locally stored files, everything is streamed from Qobuz

All i want to do is backup my playlists. Is this what we are talking about? Im not a network/linux/terminal guy, just want to make sure my playlists are stored in case any problems

I dont have any locally stored files, everything is streamed from Qobuz

Then you do not have any local files to back up.

All i want to do is backup my playlists. Is this what we are talking about?

Then, Roon backup is all you need.

Haha. Thanks. As others have said, playlists that you create from within Roon are kept in Roon’s database, so a database backup is all you need. But, hopefully, my notes about how to backup music files that are on internal storage will be helpful to others.

Very helpful indeed, and thank you!

Does this software work for ROCK and do I need another computer running Windows? (I only have a Mac in addition to the NUC ROCK that I plan to build).

It works for ROCK (by accessing the file system over the network), but it runs on Windows, so you need another computer running Windows. Allway Sync is Windows-only, so you’ll need to find an equivalent sync /copy program that runs on Mac. Have a search through the forum - folks have made suggestions for this in the past.

Thank you for the info. I’ve found Carbon Copy Cloner and ChronoSync as suggestions for Mac in the forum, but both are a bit pricey. Will look into them and also consider the more technical rsync function that is built into MacOS.

Lovely @David_Snyder, thanks a lot. Have been aware of the rsync command for quite some time, but never had a reason to try it. Now you gave me the confidence to try it out for the first time with a real use case.

Now I wonder if it would be possible to create some sort of Apple script out of this, to automate it a bit more… Let’s see if I can figure that out.