My Beethoven 1-9 box (John Elliot Gardiner) set was completely messed up. Only two of the 9 showed up even. had to modify the meta data to get them to show, then had to fix all the mislabeled/identified albums and tracks. Classical seem to give ROON fits with all the different ways the tracks have been labeled and identified over the years.

I ran into the same problem with a boxed set of Shostakovich symphonies. Each CD had a slightly different title or title syntax.

I just renamed/combined the directories and/or renamed the files on disc to read the way I wanted.

Not really Roon’s fault. Really the fault of the ripper and the database it’s looking at.

@support, this issue was raised 3 years ago. As far as I can see it was never addressed. It is certainly fixable using WORK/PART tags in local libraries. However, with streamed content it is not.The Zinman Beethoven Symphonies 3 & 4 were re-packaged many times. I have added the complete 9 symphonies from Qobuz but it seems to be a problem with any Zinman Beethoven Symphonies 3 & 4 release. 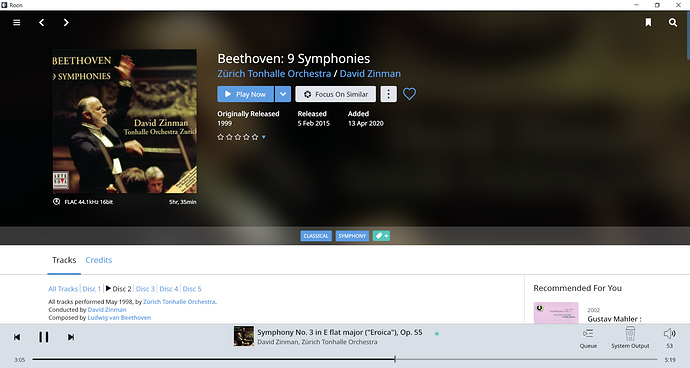 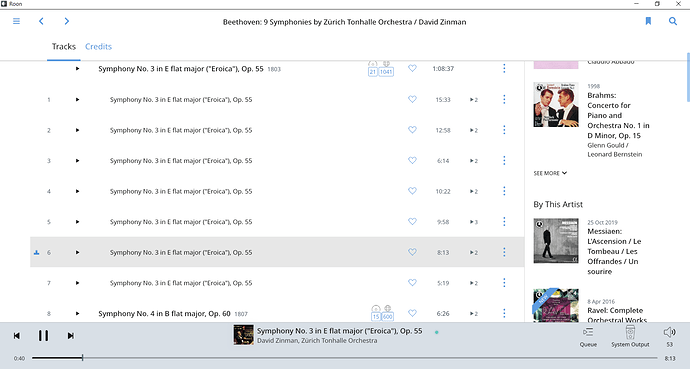 5 posts were split to a new topic: Roon is simply unusable for classical collectors

@tripleCrotchet This one obviously fell through the radar a long time ago. Apologies for that. We’ve sent an request to the relevant metadata provider to get this fixed.

Thanks @joel. I’ve made a note in my diary to chase in 3 years

Manual settings sorts it , they seem to have Symphony 3 & 4 merged in some way.

The original track names have no Delimiters between work & part eg “-” or “:”

While we’re on old ones , the Symphony 3 metadata issue is still there

Now go to the composition

There is no split between Local and Tidal (in my case) , the other Symphonies are fine just Symphony 3

this is Symphony No. 2

Hej Mike. What exactly are you doing? Doesn’t work for me. Are we talking about the same thing?

This is streamed content (Qobuz). Not a local library. 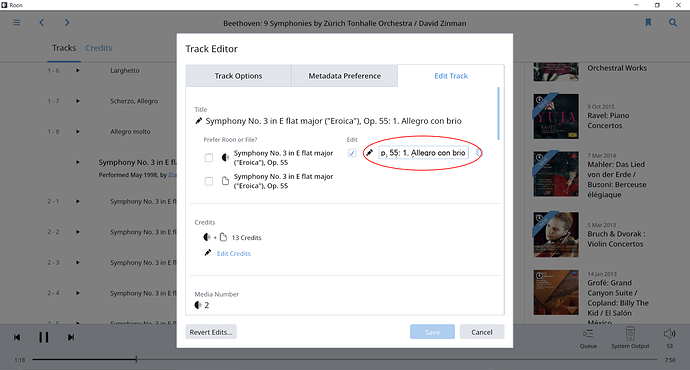 Sometimes I find this will work, and roon will identify and display the composition hierarchy correctly. Sometimes this doesn’t work and I don’t know what the pattern is. It doesn’t matter what you do. No matter what combination of composition edits, delimiters etc. It simply will not work. So I am curious how you got it to work. Maybe it was a local manual edit? That always works.

I’d just like to get this working. But it does open up another can of worms. If the editing features of streamed and local content were the same (for example supporting WORK/PART tags for streamed content), then users (like myself I guess) who are embracing streaming more and more would be much more self sufficient. I cannot see that it is practical to fix the meta data supplier libraries one support request at a time.

This is a Local set I had already added Composition so I used MusiCHI Tagger (Text Processing) to split off the Movement then Told Roon to prefer file.

Obviously with a streamed version you’re stuck with it

you’re stuck with it

Unfortunately yes. For a while I was baffled why roon chose to provide different editing functionality for local and streamed libraries. But then I realised that I got it wrong. Roon is providing the same editing functionality to both local and streamed libraries. That is, in many uses cases, as here, none to both. The only difference of course is that with local content roon is allowing the use of a 3rd party tagger but of course that work around doesn’t work with streamed content.

2 posts were merged into an existing topic: Roon is simply unusable for classical collectors

No need to wait that long

. This is actually now fixed in our database, though it could take up to a week to get pulled into your library via the normal metadata update process.

Thanks Joel. Appreciated. I’ve got a few other annoying ones but I can’t remember. I’ll post when they come up again.

@tripleCrotchet The Zinman Symphony No.3 and No.4 on disc 2 should now be correct.

Everything working. Just checked. Much appreciated.