Best Streamer without DAC to go with Roon

I currently use a bluesound node 2i with Mytek Brookyln DAC, but wanted to get a streamer that doesnt have a DAC since I don’t use the bluesound one.

Do you use one? I have heard of this brand- will check out

Metrum Acoustics Ambre is a good one. I have the Ambre since last week.

Yes, with a uptone audio power supply. I like it!
A friend also. He used a Linn , but this is MoreMusic…

I’m using an off-the-shelf Raspberry Pi 3 B+ (Canakit) with RoPieee on it to feed my Liberty DAC via USB. Works great as long as you use WiFi for the network connection. $60.

I’m using an off-the-shelf Raspberry Pi 3+ with Ropieee on it to feed my Wadia di122 DAC via USB. Works great on ethernet! Total cost $40.

I can do wi-fi would would prefer hardwired. thanks for info tho!

I’m assuming the Brooklyn has the same XMOS chipset handling USB input that my Liberty has. There’s a bug triggered by transitions from a track that’s at the same bit rate as the following track, but a different bit-depth. Hangs the DAC. In real life, this mainly happens when switching from an MP3 track (24/44.1) to a CD track (16/44.1) within a particular timing window (or vice versa). I found that using the Ethernet port to feed the USB port triggered this, but using the WiFi doesn’t. Presumably this is because a single controller chip handles both the Ethernet and the USB ports on the Pi, but the WiFi is on a different controller, which alters the timing enough the bug doesn’t present itself. But you won’t see it if you don’t have an XMOS chipset in your DAC. Or if you don’t have MP3 files in your library, I’d think.

Like @Wilco_Havenaar, I recommend the Metrum Ambre, connected to your DAC with AES. I don’t know about the Brooklyn’s USB implementation, but for most of the DACs I own/have owned, USB input is not as good as AES or S/PDIF coax (exception: Soekris dac1541). Some of the other recommendations are USB only, which I would not recommend unless you have clear positive evidence that the Brooklyn’s USB input is as good as AES or S/PDIF coax.

most of the DACs I own/have owned, USB input is not as good as AES or S/PDIF coax (exception: Soekris dac1541)

I have some reports from our Lumin U1 (MINI) customers that they find AES to sound better than USB with their DAC too, after doing A/B comparison using our product (with USB / AES / BNC coaxial / RCA coaxial / Toslink outputs).

Note that if one desires playback of DSD128 or higher, or the DAC does not support DoP64 over SPDIF / AES, then USB is required for DSD playback.

The Ambre comes default with a Ropieee install. But you can use you’re own sd card with other installs.

as long as you use WiFi for the network connection

This seems a bit counterintuitive. Care to elaborate?

so, I would have to install another card to use spotify, etc aka anything other than Roon?

Yes, you can install another card with DietPi for example.

At Metrum Acoustics we do not believe in “taking prisoners”, hence the choice to provide our clients with an open platform. Using our AMBRE, a client could swap the SD card installed, and open up a whole new world with content from different providers, such as Qobuz. Adding web radio and play it throughout your house, office, wherever you wish to enjoy music, installing Logitech Media Server might be the solution. As for warranty we are OK with you choosing freedom, however as long as the changes apply to the software. Once the hardware is being manipulated, warranty is voided.

I’m surprised that no one has suggested the USBridge or DigiOne Signature Player from Allo.com. These come pre-assembled and pre-installed with DietPi and Roon Bridge. You literally pull them out of the box, plug in Ethernet, USB or S/PDIF, and power, and they show up as an output ready to enable in Roon!

Sound quality is several steps above what’s available from a stock Raspberry Pi’s USB output, and there’s not futzing around with flashing an O/S or snapping things together.

Yes, there are more expensive solutions out there, but I’m not aware of any that perform significantly better. The Allo products are improved a bit by supplying them with cleaner power, so consider the iFi Audio DC iPurifier2 or iPower 5V as optional accessories.

Right, but I am well aware and heavily considering it. I mostly use Roon with Tidal, but I also want to be able to use Spotify or TuneIn.

See above. It’s the XMOS chipset in my DAC, and the combo Ethernet/USB controller in the Pi.

Roon has some support for Internet radio (I believe that TuneIn URL’s will work). Spotify will probably never work, sadly. Lots of rumors about Qobuz, which I think would be a nice addition. 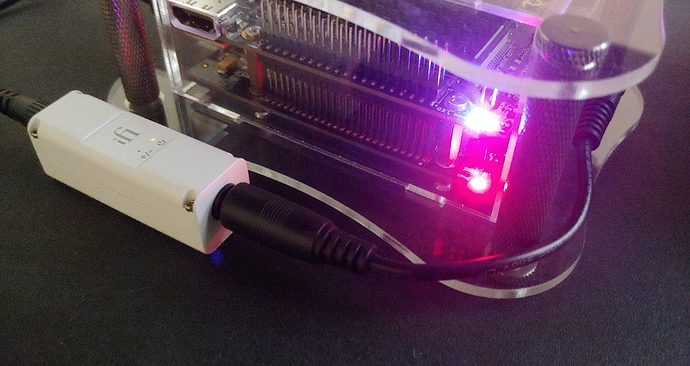