I just took delivery of a Roon Nucleus, having previously had the core on my Mac. Completed the migration with a few wobbles, and I have connected a Samsung T5 SSD to the Nucleus, which has my iTunes library on it. I have also used this SSD to make scheduled Roon backups on, and the first backup seemed to complete ok, however, when I added another Hard Drive I had to the remaining USB port on the Nucleus and tried to set up another scheduled backup I get the error window shown below. 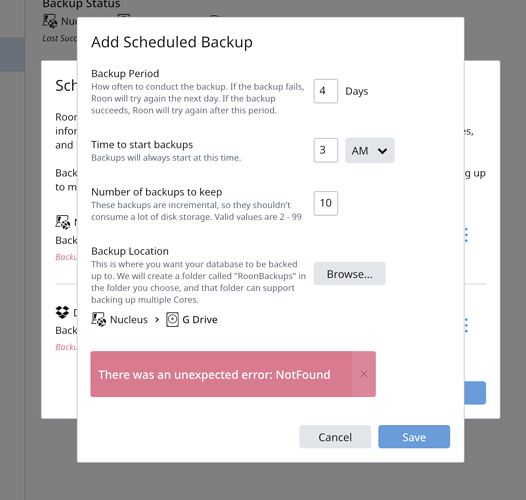 Do I need to format this external hard drive a certain way for it to work. With the Samsung T5 it was new, so it copied the library from my Mac fine, and the Nucleus had no problem with it, so I’m wondering why I can’t set up this second scheduled backup on the hard drive.

Also, the installer advised me on delivery to use Dropbox to make a copy of my backups, but the backup folder was 13GB in size, and the copying process was glacially slow, and eventually stalled, so I used a hard drive to restore the backup folder to the nucleus and that worked no problem. Can you tell me is it worth my while trying to establish a scheduled backup using Dropbox, and would the 13GB folder size exceed my storage limit with Dropbox?

If you are able to advise I’d be very grateful.

As mentioned in our Help Center:

If your music is stored on an external USB drive, plug it into your Nucleus now. Nucleus supports USB drives pre-formatted as EXT2/3/4, VFAT/FAT32/FAT16/exFAT, NTFS, or HFS/HFS+. Note that HFS/HFS+ (also known as “Mac OS Journaled”) is read-only, which means that the Nucleus will not be able to make changes or store new music on the USB drive.

Using one of those formats mentioned above should work for you.

Regarding Dropbox — It’s a great place to store backups, but restoring from Dropbox is not recommended, especially for larger databases. The speed of the Dropbox API is pretty limited, so it’s always best to download the backup from Dropbox to a USB drive and then restore.

Thanks for the info, much appreciated.