What is the best way to play multichannel music through roon?
Should I connect my nuc roon rock to my avr via HDMI? Connect a separate nuc as a standalone multichannel endpoint and connect that to my avr? Or something else?

I think that is the shortes way. I have exactly done that. First I had a MediaPC as endpoint via HDMI but it said goedbye with a big bang a few months ago. Since then I have the NUC Roon core connected. If you want to have a seperate endpoint I would go with just another NUC. Maybe fanless or just a processor with less muscle as it is only ment to be a player.

Is HDMI the way to go? Or just add a pi with spdif?

sorry I edited my question.

I don’t know about PI’s, but with NUC’s its definately the HDMI

Or just add a pi with spdif?

Gotcha. I thought it could.

If you’re using DD or dts, then also SPDIF is an option.
For lossless multichannel you need HDMI, USB or I2S (but I don’t know a multichannel DAC with I2S).

By the way: You don’t need a NUC for installing Rock. A lot of cheap (absolut silent) mini PCs can act as Mock…

For loss less multichannel you can use a multichannel DAC like the Exasound along with their network streamer Sigma Streamer which is Roon ready.

Note that I use this for music only. If you’re doing video then HDMI etc

What’s you evidence for that?

Should I connect my nuc roon rock to my avr via HDMI?

I’ve had the NUC/ROCK connected to a Denon receiver via HDMI for years and it works very well playing multi-channel PCM files up to 192khz 24bit. The only issue with HDMI and Roon is it won’t play DSD files even though the receiver can play DSD.

I decided to add a Roon Ready MC DAC to stream 8 channel DSD files and still use the HDMI zone at times to simulate MC and use subs with 2 channel files. You should try it and see for your self.

Thanks. So a multichannel dac?

While you can’t play DSD files directly over an HDMI connection to an AVR, Roon will automatically convert to PCM. 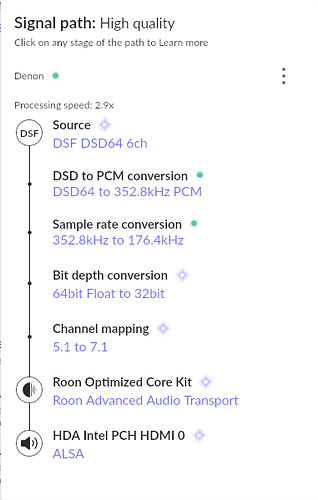 That’s too bad about dsd

No it isn’t.
Most people are using a DSP (bass management, Dirac ,… ) on there AVR and so it doesn’t make sense to use DSD as source, because latest the AVR will convert all DSD to PCM.
For multichannel DSD I’ve a exaSound e68 DAC, but in my setup I’ve five fullrange speaker and a Sub which is only used for the LFE.
So I don’t use here any DSP and then it can be worth to buy such a DAC (there are also cheaper one e.g. from topping).

That’s why I invested in an exasound. (I’m selling my e38 if you’re intwrested plus the Sigma streamer and the Teddy Pardo LPS. Just saying.)

Either way, It’s a fabulous DAC.

it doesn’t make sense to use DSD as source, because latest the AVR will convert all DSD to PCM.

There are a few receivers and pre-amps available with 7.1 analog inputs but they are getting scarce.

The Denon AVR-X8500H has that feature and is the reason I switched from Yamaha when they discontinued the MC analog inputs on the newer models. Marantz also has or had that feature.

The receivers 7.1 analog input section along with the MC DAC and SACD players 7.1 analog outputs maintains the analog all the way through to the amps without any PCM conversion.

Sorry, but such a quoting is completely misinterpreting my posting!