Best Way To Not Show Tidal Albums In Library?

What’s the best way to hide or not show album versions from your Tidal Albums list in your library view when the same album exists in the local library? Two things are bugging me right now with Roon and Tidal: 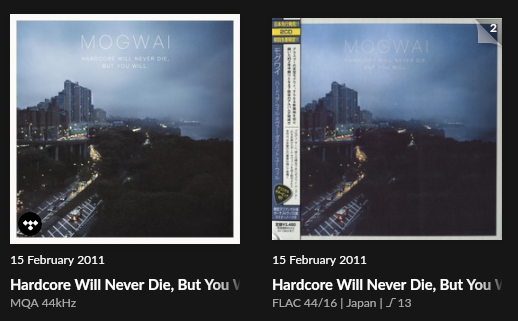 Is there any way to ask Roon to ignore Tidal albums? Is it to turn off displaying duplicate albums? Is it possible to say “Don’t display when a local version exists?” so that I can still albums that I’ve added in Tidal that aren’t local?

You will not get this automated as there are a number of factors as to how Roon chooses which album is the primary one and often there will be more than one release available for that album your may not match to what’s in Tidal.

Ensure show hidden albums and tracks is off in settings menu.

You will get some albums that are a different master of release to one you have in your library. Roon has a concept of versions so will show you ones that are different master to the one you might have. Here you need to do so management as it won’t do this itself. You can merge two different versions of an album by selecting them both , click on the 3 dot menu and choose edit, you will have an option to group alternative versions.

Also Roon will always choose the highest Res version as it’s primary
source for that album you can change which album is the primary by clicking on the versions tab and click on Make Primary Version
the one you want. So if Tidal is mqa it will trump you cd quality rip.

Below there are 3 versions of this album I made the 48/24 from Qobuz my primary also these are two different releases grouped using the method above as the explicit one will show as a different release to my own rip which isn’t designated as being explicit even though it is.