Most of my music comes from CDs or fully downloaded digital albums, so organizing them in a clear folder hierarchy for Roon to reconize (for and for me to manage consistently) is easy enough - e.g. Artist\Album\Track

However - when it comes to singles that do not have an album (e.g. misc one-off music downloads), I am unclear how to organize the the file, or tag its metadata, in terms of what the “album” should be called.

I’d like to do this thoughtfully, as I expect this to escalate in the future, and I’d love to get an idea what is the smartest forward looking way to organize such music singles for proper management in roon later on.

Thanks for any advice

Instead of the album title, I use the song title as the folder name, and within that folder I have the single named by the single’s name. I then bring up the song in the album view, click on the three dots, editing as needed. Do not forget to change Album Type to “single” !!

Where do you change the album type?

Where do you change the album type? 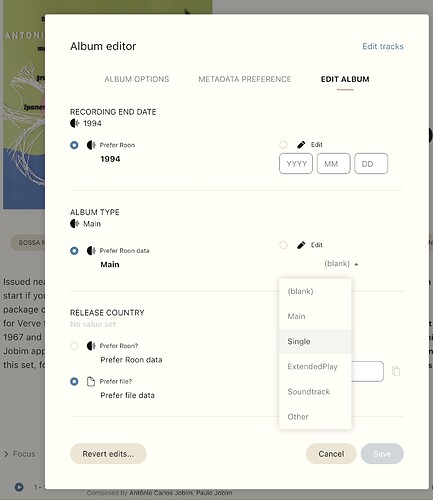 Oh, when you change the album type to “single”, when you view the artist, the single shifts from being in the “Main Albums” down to the “Singles and EPs” section below it, making it far easier to visually see what singles you have by the artist.

The suggestions given are very helpful.I’ll just add my take on this.
I don’t collect singles, and dont have many. But the ones i have are “tagged” in the way of adding the word “Single” within brackets as a part of the album title.
An example:

Roon picks up the word Single and adds it as Version to the album also. You could use parenthesis also.

(Yes, i know Walking With A Ghost should be considered an EP rather… )

You guys rock! This is probably one of the most helpful threads I’ve started and solved my problem fully! I implemented all your suggestions and together it added up beautifully. Thank you

As I’m now in fully-optimizing happy mode, I have a couple of small follow up questions if I could:

@Neil_Russell – I am able to view the singles now in the album view page, but to do that I go through “Focus” and select “Single” to see only Single albums. I in my view, when I go to Albums in my Library, I don’t see the “Singles and EPs” section below that you mention - how do I set the view to see both segmented in the way that you seem to be able to see?

@Mikael_Ollars – I added “[Single]” as you suggested to the single folder name, which seems like a smart long-term practice to develop. That said, I’m not certain I understand what Version means and your reference to it, would love to learn so I can appreciate that.

That you all again for your time and help, deeply appreciated.

when I go to Albums in my Library, I don’t see the “Singles and EPs” section below that you mention

You can see both together on artist pages, not when you’re browsing all albums. For example: 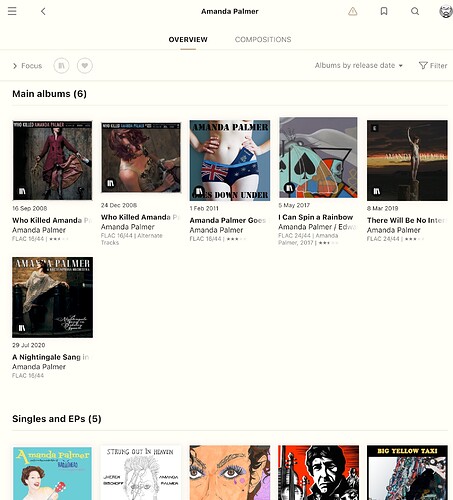 The singles show up segmented if you are in the Artist view. I’ve never seen it that way in the Album view.

We just want to help all we can, just as others have help us in the past (and probably the future).

Thank you both! I’m perfectly set for this afternoon’s playing

I added “[Single]” as you suggested to the single folder name, which seems like a smart long-term practice to develop. That said, I’m not certain I understand what Version means and your reference to it, would love to learn so I can appreciate that.

Yes, it seems to be useful in non-Roon situations also!

I refer to Version as a possible visual marker and also as one of every albums properties.
In the Album view 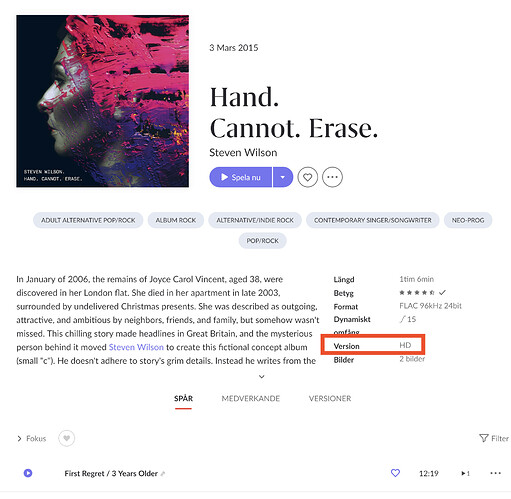 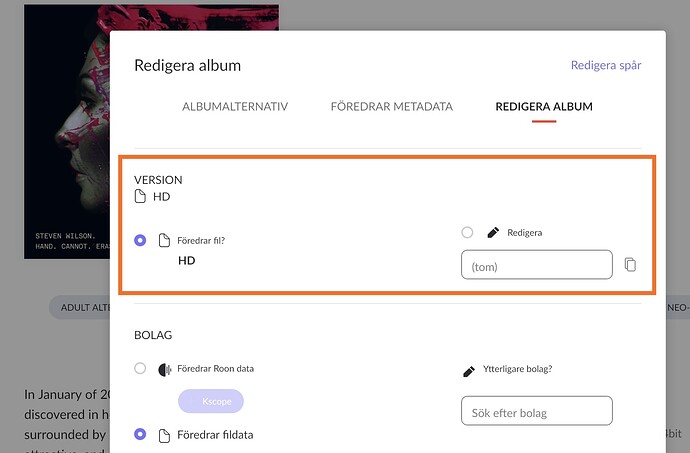 The Versions is also visible in the album “grid view” from Artist page and other, if you enable the view (from Settings-Customize Album Display):

However, Roon treats brackets and parenthesis the same way, which may get a bit confusing, as album titles occasionally have parenthesis parts, such the green selection! 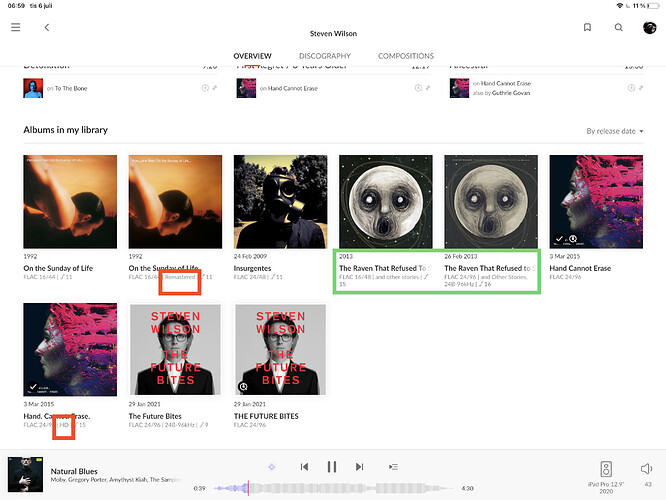 Thaank you @Mikael_Ollars - the brackets and parenthesis mix could become a minor headache, I can see that. Still, very helpful to know!