I am looking for a way to “blacklist” a specific artist so Roon never plays anything by goddamn Father John Misty.

Can’t stand anything that dude has ever done

I believe if you bring up the artist page, click on the heart twice you will get a small circle with a line through it. Means that you have blocked the artist. Can be done for Albums and Tracks as well. 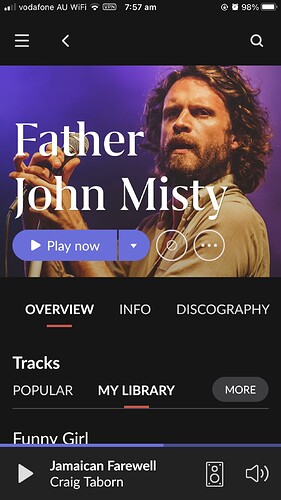 Huh, that’s weird, I don’t have the heart icon on his artist page. It appears for other artists, however…

You have to add the Artist or Album or Track to your library first! Its very counter intuitive.

Could Roon improve the experience for users by allowing users to hide certain albums from view without having to add the album to their Libraries first? I found this is the only way to exclude the tracks from the “other” artist when playing artist radio station or “contaminating” an artist’s Discography when another Artist has the same or similar name and Roon/Qobuz/Tidal are unable to differentiate between them. Examples are JOSIN (Arabella Rauch vs other artist of the same name), JONES (Cher…

This would be the single most valuable improvement Roon could make in compensating for the data quality of the third party metadata providers we rely on.

If I could zap (for instance) all the artists named “Cream” that don’t have Clapton, Bruce and Baker as the members of the band… well that would be huge to me. Surprised this has not got more upvotes.

up votes are a feature of the “Feature Suggestions” forum. I don’t know if anyone has already submitted a request for what you want to see in Roon.

I don’t know if anyone else remembers TiVo? The thumbs-up and thumbs-down options allowed 7 stages of granularity to like/dislike a program or a genre of TV show (3, 2 or 1 thumbs-down, no rating, 1, 2 or 3 thumbs-up). This aided the learning algorithm and would start to add matching shows to your library for watching later.

This kind of functionality would be amazing in Roon if it covered tracks, albums, artists and genres.

What about Rap/hiphop? Possible to bl?